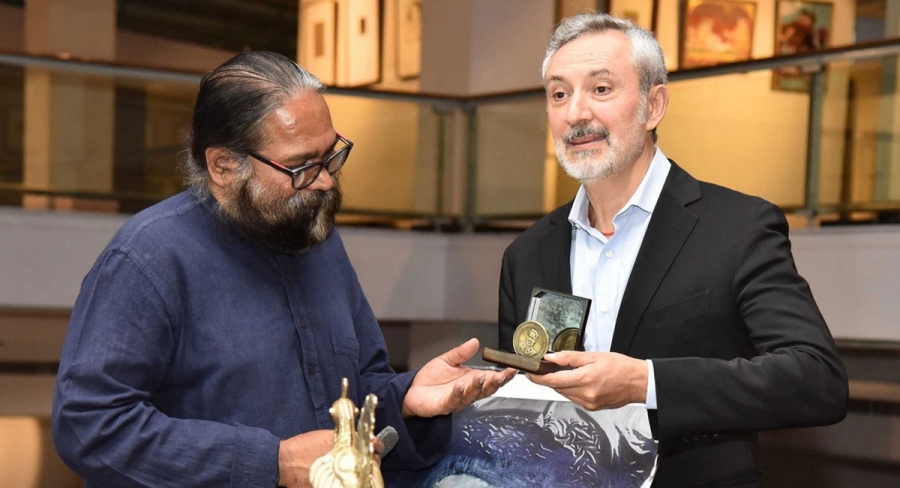 Even as Ram V. Sutar, the sculptor behind Sardar Patel’s 182-metre statue on the Sabarmati in Gujarat, is feted and lionised, there’s another artist who has done challenging work in the heart of Delhi and carved granite stones to immortalise the names of 34,884 martyrs in the police and para military forces.

In Chanakyapuri, where the world’s embassies occupy sprawling spaces, stands a 30-foot tall structure dedicated to those who laid down their lives in the line of duty. The National Police Memorial has been designed and conceptualised by one of India’s prominent sculptors, Adwaita Charan Garanayak, who is also the Director-General of National Gallery of Modern Art.

Coming from a small village in Odisha, Garanayak grew up in the lap of nature and says that for him nature is the biggest teacher as it has “spiritual power” within itself. “Stones, trees, water, have vibrations which I feel and represent through my work,” he said.

Talking about the concept behind the structure, he said: “When we look at the sky, mountains, ocean, we feel so vast… and if one sees the tall structure of the memorial, one would be able to feel its vastness. While looking up to it, our heads will automatically bow down to it in respect.”

The front of the memorial depicts a “soul rising from the human body”. The back of it depicts drops of nectar falling from the sky and at the base runs a 60-foot long river. On a “Wall of Valour” along the sculpture are engraved names of over 30,000 persons from almost 65 organisations who were killed in action after the 1962 China war.

These include people from the police forces, the CRPF, the CISF and the BSF, among others, says Garanayak who explained that they did not want to “categorise a martyr” so the name of the organisation is not written on the wall. He said the nectar depicted in the statue is like “God’s blessings” to us.

While brainstorming on the design of the structure he said he wanted to make sure that it represented everyone in the country. “I wanted to make it symbolic so that everyone merges into it and have a sense of affinity towards it,” he added.

The carving of the monolithic black granite stone, mined from Khammam district of Telangana, started in the first week of August. “We completed a task meant for two years in under three months. It was quite a challenge. The carving was done on the spot in a continuous process,” said Nivedita Misra, Garanayak’s wife, who was also a part of making the memorial. The Prime Minister opened the memorial on October 21.

From the beginning, a team of about 40 people were associated with it, though later many more were involved, including those who mined the stone and those who helped to keep the area clean. “There were lots of changes in the initial design. We worked day and night to complete the work before the deadline,” an artist from the team said.

“The final structure is far better than what we had conceived. Team work was very important. We did not even let nature stop us…rain, heat or dust… we worked 24/7,” Misra said.

“Since we were carving on stone, we could not afford to make a mistake. Everything had to be perfect at one go,” she added.

But why black granite?

“Granite is our oldest family member on the planet. We chose it because it has witnessed the history of mankind. If we surrender to it, it comes to life and when we embrace it, we’ll be able to talk to it,” says Garanayak.

“The colour black absorbs everything. When you come to share your feelings with the memorial, it will absorb it all. The families of the slain soldiers can come and share their sadness with it and the stone will take their messages to the supreme power,” he said with complete seriousness.

“We want people to talk to it, feel it, embrace it and salute it,” Garanayak said. For him sculpting means everything. “After completing the sculpture it feels like I have taken a rebirth,” he said.