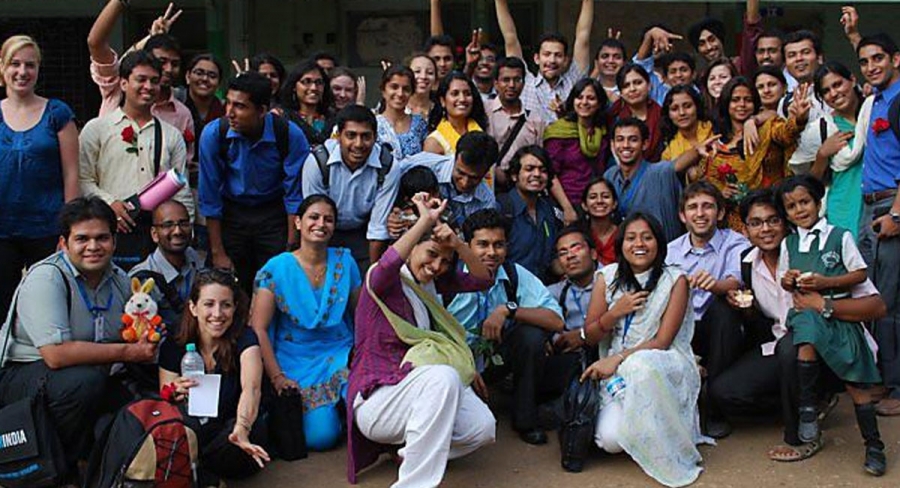 While kids of their age were busy playing, 12-year-olds Jatin, Vikas and Ritesh joined hands to resolve the problem of garbage disposal and the unhealthy living conditions in their working-class neighbourhood in Shiv Vihar in north Delhi. At the same time, Aatrey, another pre-teen from Nilothi Nangloi, took the initiative to solve the problem of an unsafe road after his aunt met with an accident.

The force behind these children acting as civic change-agents was their Nikita didi [elder sister], a commerce graduate from Delhi University. Nitika Sharma, 23, from Dwarka wanted to “create a significant change by empowering children as future leaders” – a desire which led her to the “Teach for India” initiative in 2017.

“We had problems in our communities and we wanted to solve them, but we did not know how. Nitika didi guided us to be change-makers and helped us improve the conditions in our communities,” said Vikas, who wants to become an army officer.

Sharma decided to teach the kids – all students of Class VII in Sarvodaya Bal Vidyalaya, Vikaspuri –  about their rights and responsibilities and how to bring about change by working in harmony with local authorities.

“I wanted to make my students problem-solvers and change-makers in the society they live in. In order to work on their leadership skills, I planned to take up a community engagement project. I saw how they faced problems living in low-income communities and wanted them to lead the transformation,” Sharma said.

“The students were surprised and excited as it was new for them. They had studied the hierarchy of the government, but they never had real experience of contacting government authorities. I wanted them not only to study but understand the government and how we, as citizens, have every right to bring about change in harmony with the government,” she said.

Her efforts not only inspired the children but also enabled them to be change-makers.

Among the few successful efforts were the garbage disposal project by Jatin and Ritesh, stray-dog project by Prince, and road cleaning project by Bhavesh.

“They [Jatin and Ritesh] contacted the Municipal Corporation of Delhi [MCD] regarding the unhealthy conditions and followed up for three months, which led the MCD to take notice and their problem was addressed,” Sharma said.

Prince, 13, also from Shiv Vihar, worked on the problem of stray dogs causing nuisance in the area.

“The nuisance created by dogs was leading them to be ill-treated in the community. He contacted the respective authorities and followed up with them to get the dogs transported to a safe rehabilitation shelter,” she said.

The journey, however, was not smooth. “For solving complex problems and issues, usually more time is required. It took almost four months for solving issues like the sad state of roads. At that time, the students started losing hope. I had to make sure that I was helping and motivating them,” Sharma said.

“Moreover, I did a session on rights and duties. I told them it is their duty to initiate the steps to solve problems, as we always fight for our rights but seldom remember our duties,” she added.

She also recalled that it was “very easy” to lecture students about change, but it was slightly difficult to motivate them to take ownership for effecting a change. However, the success of these children does help her in motivating other students as well.

“They felt responsible towards their communities, which accelerated things. I started the project before the summer holidays. I integrated holiday homework with the project so that students would be invested in it. I made sure that parents were also informed and invested, and they also encouraged their kids to solve the problems in their communities,” she said.

Her objective was to inspire and equip students with the skills, values and knowledge required to be dynamic and responsible citizens of a democratic India.

“Aatrey’s story of getting the road repaired helped in motivating other students to take the initiative and solve complex issues. When he started with his project, nobody believed in him. He started his project in mid-April and followed up for four months. When his problem was solved, there was a ripple effect and other students started taking initiatives on their own and took immense pride in the efforts of their classmate,” she said.

“Jatin, Ritesh and Vikas’s initiatives helped in encouraging other students to work on problems of cleanliness and hygiene. Now they want to encourage people even in their communities to focus on cleanliness,” Sharma added.

On the other hand, she said, Prince’s initiatives helped in motivating students to have a safe environment. Apart from these successful efforts, there are students who are working on other projects as well.

Recalling their experiences, Atrey and Vikas said the MCD was “surprised” after receiving a call from children.

“We called MCD regarding our problems. They were surprised that children were calling them but they were extremely supportive. They asked us about the address and the nature of the problem and gave us the complaint number. We had to follow up with them for one to four months depending on the problem. We contacted the respective authorities through calls and waited because we knew some of the problems were grave,” they said.

The positive response from the children and the MCD built a trust between people and the system.

“We would like to solve other problems in our communities and inspire other people to lead change. We also want to have sustainable solutions and we can do that by creating awareness in the communities,” Vikas added.