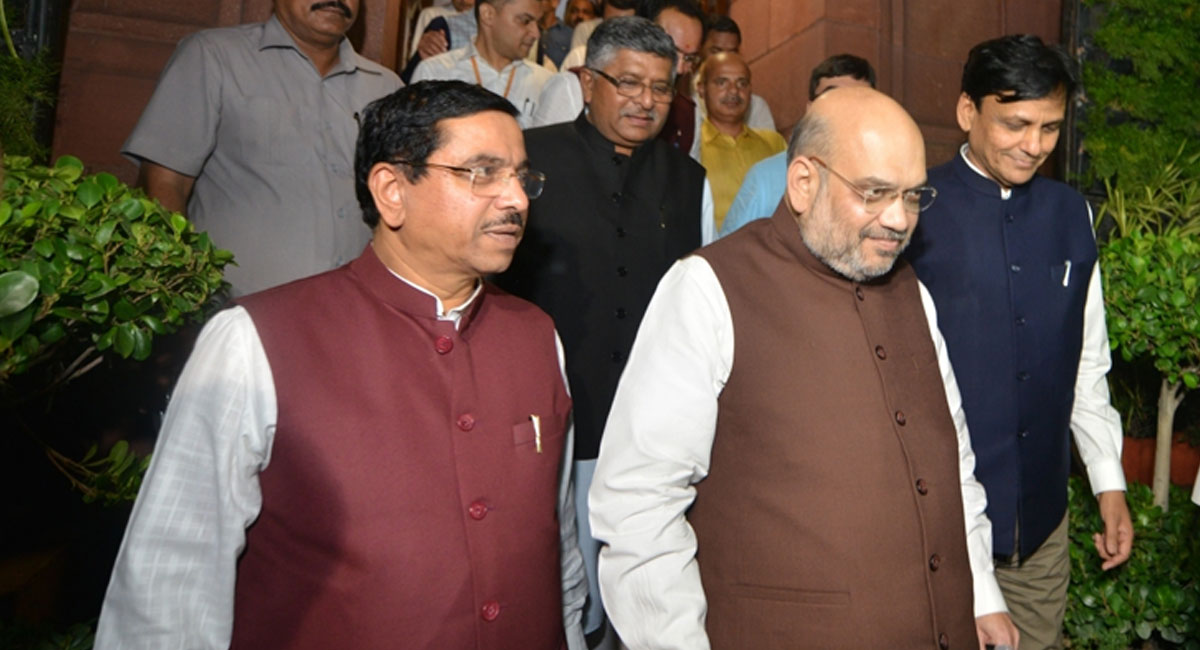 A shroud of gloom and doom enveloped Jammu and Kashmir on August 4 when the Amarnath Yatra was abruptly called off and pilgrims and tourists were asked to leave the Valley even as an additional 45,000 paramilitary troopers were reportedly flown into the Valley, joining the nearly 300,000 army personnel already in the state.

While these developments raised speculation over the possibility of a massive anti-terror operation in the Valley against Pakistani terrorists, the locals in the state woke up to a communications blackout and a curfew on the morning on August 5.

Even though authorities often shut down mobile and internet services in the Valley, this is the first time in recent years that landline connections too were severed, making locals clueless about what was to follow.

At the time, nobody in the country knew that just days before India’s 72nd Independence Day, the Central government was setting the stage for revoking the special status accorded to Jammu and Kashmir by diluting Article 370 of the Indian constitution.

In one swift move on August 5, the government bifurcated J&K to create two Union territories — Jammu & Kashmir and Ladakh. India now has 28 states and nine Union territories. This is the first time that a state has been turned into a Union territory, however, Home Minister Amit Shah has assured people that J&K will get state status once the security situation in the Valley normalises.

In the Rajya Sabha, the Bhartiya Janata Party (BJP) may have been eight seats short of a majority, but the House passed the J&K Reorganisation Bill with a two-thirds majority. The BJP even had the support of hostile political parties such as the Aam Aadmi Party, Telugu Desam Party and Bahujan Samaj Party. Ally Janata Dal (U) opposed the bill, but by staging a walkout, it indirectly helped the BJP.

Within hours of the passage of the bill in Parliament, former J&K chief ministers Mehbooba Mufti and Omar Abdullah, who were under house arrest from the night before, were taken into custody.

The National Investigation Agency (NIA) also arrested independent MLA from North Kashmir Engineer Rashid in connection with a case of terror-funding. Reports say more than 800 political leaders and activists have been detained in the past few days.

There is no word from the government on how long it is planning to keep the Kashmiri politicians under arrest.

Many have criticised the government’s move to arrest mainstream politicians, saying this can play into the hands of separatists. Some even called the move to scrap Article 370 unconstitutional as it was not preceded by an open debate in Parliament, without any consultations with stakeholders and enacted during a clampdown of information and communication in the Valley.

Prime Minister Narendra Modi and the BJP have reiterated the need to scrap Article 370, calling it a temporary provision that was included in the Constitution on October 17, 1949.

The article exempted J&K from the Indian Constitution and permitted the state to draft its own constitution. Its dilution has done away with all of the erstwhile state’s special powers, including that of the state legislature to draft its own laws on all subjects other than communications, defence and foreign affairs. Another feature was that people from outside were prohibited from purchasing land in the state.

For the first time since Independence, the Indian constitution will fully apply to the Valley, unlike the previous special exceptions of J&K’s own constitution, flag and penal code. The government’s bold move has led to much debate, with many calling it a masterstroke that will end terrorism in the region and kickstart economic growth, while others warn of serious consequences that could make an already bad situation worse.

In his address to the nation on August 8, Modi said he was confident that terrorism in the Valley will end, the region’s economy will experience economic growth and even a boom in tourism after the government’s historic move.

The troika of Modi, Union Home Minister Amit Shah and National Security Adviser Ajit Doval are said to have meticulously planned the move in Kashmir for months. Some political commentators believe United States President Donald Trump’s offer last month to mediate between India and Pakistan on the Kashmir issue expedited the Centre’s plan.

However there are others who say it was the combination of factors – a stable domestic political situation, a debt-ridden and weak Pakistan, and pre-occupied power blocs – that led to the Kashmir development.

Article 370 has been on BJP’s agenda for decades, featuring in its election manifesto year after year.

Speaking at a recent event, Shah said, “Article 370 was of no use for India or for Kashmir.”

In an interview to India Today in 2017, Amit Shah had said the only solution to the J&K problem is removal of Article 370. “It will be one bitter dose, but it will solve multiple problems in one stroke,” Shah added.

A major aspect highlighted by Modi and Shah for the bifurcation was that the erstwhile state had failed to witness the required development despite huge amounts of central funds and subsidies to the tune of around Rs 2,74,000 crore being pumped there over decades.

There have been allegations by leaders of Jammu and Ladakh that most of the central funds were usurped by leaders in Kashmir Valley and did not reach their provinces.

This, in fact, was a major reason behind the long-standing demand in Ladakh for grant of Union Territory status by delinking the cold desert region from Kashmir. The people of Ladakh have been maintaining that their region could not witness development as “Kashmir-centric” governments in Srinagar did not provide adequate funds.

Even in Kashmir and Jammu, common people have been complaining that the benefits of central schemes and funds do not reach them.

Shah, while speaking in the Lok Sabha, said the Modi government decided to adopt the “new” approach of bifurcating the state and ending its special status as the old approach has not helped in its development despite huge amounts of funds being provided bythe Centre over decades.

Over the decades, the state has also received thousands of crores of rupees for Dal Development Programmes but the iconic lake in Srinagar continues to be in a mess.

Modi’s Kashmir move took the country by storm and started making waves in the international community, but no country could have been more aggrieved than Pakistan. Pakistan’s top civil and military leadership expelled Indian High Commissioner Ajay Bisaria and suspended bilateral trade with India while reaching out to the United Nations and international community.

It was also reported that Islamabad has hastily reactivated nearly a dozen terror camps in Pakistan occupied Kashmir (PoK) and close to the International Border along J&K.

During the past week, hectic movement of terrorists has been seen around these camps which were almost shut in the wake of May 2019 deadline set up by Financial Action Task Force (FATF), an inter-governmental body based in Paris.

Unless Pakistan acts against terrorists operating on its soil, it will be blacklisted by the FAFT and face sanctions that can cripple its economy.

Pakistan Prime Minister Imran Khan had stated in the joint session of Parliament that Islamabad would not be responsible if Pulwama type (or even bigger) terror attack is executed in India. The all-important statement of Imran Khan has virtually granted liberty to terror outfits such as Jaish-e-Mohammed (JeM) and Lashkar-e-Taiba (LeT) and their handlers in Inter-Services Intelligence (ISI) agency of Pakistan, to reactivate training camps and launch pads.

While Pakistan and the United Nations have urged India to exercise restraint in matters related to Kashmir, India said it is time for Pakistan to accept the reality of change in status of J&K and stop interfering in what is entirely an internal matter of India, even as it urged Islamabad to review its unilateral decision to snap ties.

Ministry of External Affairs spokesperson Raveesh Kumar said Pakistan is upset over revocation of special status for Kashmir and the massive development work that is planned to be brought into J&K now, as Islamabad “will not be able to incite terrorism or mislead the people of Kashmir anymore”.

Despite Pakistan’s appeal for support against India in the global community, only its strategic partner China has spoken in its favour. Islamabad reportedly went on a diplomatic overdrive with Prime Minister Imran Khan personally dialling leaders of many countries, including Muslim-majority states.

Meanwhile, Russia has openly backed India, saying the Kashmir move was within the country’s constitutional framework. In a big snub to Pakistan, even the United Arab Emirates, an important member of the Organisation of Islamic Cooperation, has backed India, saying India’s move was its internal matter.

The government’s next step is likely to be delimitation of the J&K legislative assembly, where the number of seats is heavily skewed in favour of the Valley despite the region being smaller than Jammu in size and population.

This will end the dominance of the single largest party, mostly from the Valley, choosing a Chief Minister from the state, now a union territory.

Kashmir, long deprived of economic opportunities and growth, must now choose its course. Kashmiri leaders have often called Article 370 a bridge that linked the Valley with India, but in recent years critics viewed it as a wall that separated the Valley from the rest of the country instead.

The challenge for the government will now be to ensure that security threats from Pakistani terrorists and separatists in Kashmir are dealt with effectively while it builds trust with Kashmiris and wins them over.

Still under curfew and a communication lockdown, how the valley responds to its new status once the restrictions are lifted and whether peace and stability can return to the region with the government’s outreach will decide whether scrapping Article 370 was a wise move to solve the decades-old Kashmir problem or a historic blunder in India’s recent history.