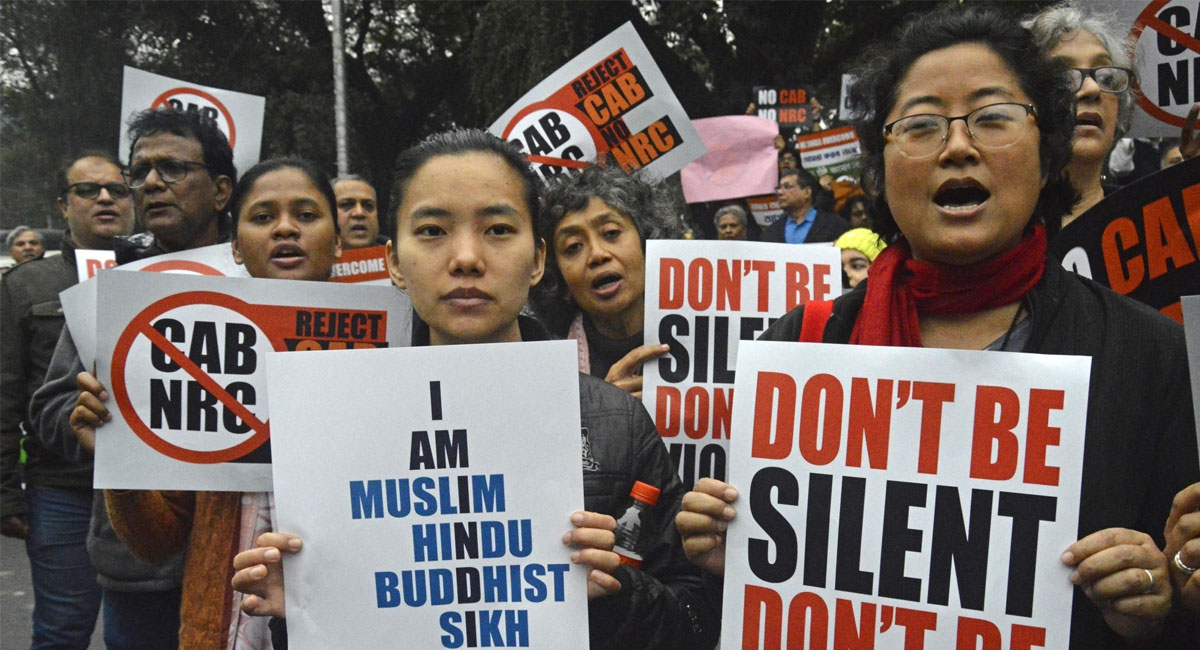 New Delhi’s usual winter chill has given way to simmering tensions ever since President Ram Nath Kovind signed the controversial Citizen Amendment Act (CAA) on December 13. More than a fortnight of protests have since rocked the country, leaving a trail of death and destruction as the Bhartiya Janata Party (BJP) government mulls its options in the face of an unprecedented crisis.

The CAA, which grants citizenship to persecuted minorities from Pakistan, Afghanistan and Bangladesh, has been accompanied by protests since its very conception. While the Act grants Indian citizenship to Hindus, Sikhs, Buddhists, Jains, Parsis and Christians who migrated to India after facing religious persecution, it excludes Muslims.

Protestors say the Act is a draconian piece of legislation which is anti-Muslim and goes against the principles of equality and secularity enshrined in the Constitution of India. While the debate around CAA has been raging for long, it was the Act’s enactment after it was steered through both Houses of Parliament by the BJP government that saw the protests turn unprecedentedly violent in some states.

The protests, however, are not only about the CAA, but also about the prospect of a nationwide NRC (National Register of Citizens) that has been repeatedly raised by Union Home Minister and BJP president Amit Shah. Critics of NRC say if the exercise takes place, 130 crore Indians will have to stand in line in order for the government to verify if they are legitimate citizens of the country or not.

The human and financial cost of the exercise is expected to be prohibitive. In Assam, the NRC exercise cost around  Rs 1,600 crores over a 10-year period and employed around 52,000 people. If the Central government decides to conduct this nationwide, it could cost upwards of Rs 50,000 crore in just administrative expenses.

Since the latest protests began in Jamia Millia University, there have been 25 deaths in three states – 5 in Assam, 18 in Uttar Pradesh and 2 in Karnataka. Opposition parties and protestors have blamed the BJP government for the deaths, saying all the violence-stricken states are ruled by BJP governments.

Meanwhile, the government has blamed protestors for destroying public property and resorting to violence in the name of protests. The Police in some of these states has also come under heavy criticism for being excessive in cracking down on protesters which resulted in multiple deaths while producing horrifying stories of people suffering the loss of limb and vision.

The damage to public property is estimated at around Rs 100 crore in seven districts of Uttar Pradesh. The government headed by Chief Minister Yogi Adityanath has been blamed for 18 deaths, 705 arrests and over 5,000 people being taken in police custody. Activists say the UP government has been the most brutal in its crackdown on protestors.

Soon after the violence, Adityanath warned that “revenge will be taken” on those who destroyed public property during protests. Political observers have criticised the government for going after protestors, but not taking any action against the police personnel who were filmed attacking private property in many parts of the state.

Condemning violence over the new citizenship law, Prime Minister Narendra Modi recently said the problem over the CAA was one of “legacy issues”, asserting that “we will challenge the challengers”.

“They [the vandals] should ask themselves: was it right? Whatever was torched, was it not of their child’s use? What has happened to those common people and policemen who got injured?” Modi asked, adding he wanted to tell those who damaged public property “not to forget that rights and duties go hand in hand”.

In recent days, both Prime Minister Modi and Union Home Minister Amit Shah have been forced to defend the CAA in the face of widespread protests. While Shah has spoken in favour of a nationwide NRC in the past, Modi recently claimed there is absolutely no talk of NRC just yet.

The disparity between the two statements has led to much confusion with no one quite sure of which statement to believe.

Janata Dal-United (JD-U) Vice President and election strategist Prashant Kishor believes Modi’s statement is a “tactical retreat” in the face of nationwide protests against the CAA and the NRC.

In a tweet, Kishor said, “The claim of ‘Abhi to NRC ki koi charcha hi nahi hui hai’ [No discussion over NRC has taken place] is nothing but a tactical retreat in the face of nationwide protests against the CAA and the NRC. It is a pause and not the full stop.”

“Government could wait till Supreme Court judgment on CAA. A favourable court order and the whole process will be back,” Kishor said.

In these polarised times, opinions on the CAA and the NRC have further divided Indian polity on matters of national interest. According to a IANS-CVoter snap poll, about 62 per cent of the citizens of the country are in favour of the CAA, while about 68 per cent citizens in Assam are against the Act.

The snap poll was carried out on over 3,000 citizens across the country between December 17 to 19 with booster sample of over 500 people each in Assam, the northeast and Muslim community collected during the same period.

In the north-eastern states, where there has been massive protests over the act recently, the report highlighted that 50.6 per cent people favoured the act while 47.4 per cent opposed it.

The survey pointed out that in Assam, 68.1 per cent people were against the CAA, while 31 per cent were in favour of the act.

The report also revealed that among Muslims, 63.5 per cent were against the act, 35.5 supported it and 0.9 per cent said that they do not know or cannot comment. Among the Hindus, 66.7 per cent supported the Act and 32.3 per cent opposed it.

Similarly, among other religions, about 62.7 per cent people voted in favour of the CAA and 36 per cent against it.

However, to another question if they think that under the guise of CAA, people can also settle in the country and then become a threat to society and security, 64.4 per cent across the country responded with yes while 32.6 per cent people said no.

In north-eastern states, about 59.8 per cent of the people agreed with this apprehension while 35.7 people differed. Meanwhile, in Assam, 73.4 per cent voted that they believe foreigners settling in India could become a trouble for society and security while 21.8 per cent differed with them.

In Assam, as much as 53.5 per cent people remained in favour of stand taken by the opposition parties while only 33.7 per cent favoured the stand of the government.

Hindus and Muslims remained divided on supporting the government stand on CAA as 67 per cent Hindus voted in favour of the government while 71.5 per cent Muslims supported the stand taken by the opposition parties over the Act.

Amidst the din of support and opposition, there are also voices of those who are directly affected by the CAA. There are close to 30,000 victims of religious persecution in Pakistan, Afghanistan and Bangladesh who are now living as refugees in India. They have been pleading the protesters across India to not oppose CAA that grants them citizenship, identity and dignity.

Opposition and activists have called the law “communal” and “discriminatory” against Muslims in India, but for the thousands of refugees this Act is a lifesaver.

Many refugees from Pakistan and Afghanistan, who have been living in several parts of India for decades, appealed to the opposition to empathize with their plight.

Holding her new born-baby, named ‘Nagarikta’ (citizenship) after CAA, Meera who lives along with hundreds of Hindu refugees from Pakistan in Delhi for the last several years, recounted the injustices and persecution, the members of the minority community in Pakistan suffered.

“We were treated as second-class citizens in Pakistan. We had hoped that we will find a life of dignity in India but it has been a long struggle here because of the denial of citizenship. I beg the protesters not to oppose the CAA which will finally grant us our fundamental rights,” she said with a lump in her throat.

Recalling the hardship he and his family faced on their arrival in India as refugees after they fled Afghanistan, Pyara Singh said, “Those protesting against CAA wouldn’t know my pain of having seen my brother shot dead by Taliban in Afghanistan. We used to have a good life and business until they took over. We paid ‘jaziya’ under them. Shias went to Iran, Sunnis went to Pakistan. Where were Sikhs and Hindus supposed to go if not India? We fled with nothing and we still have nothing. Those who are protesting don’t have to worry about food, shelter and clothes. They don’t know when I got here I didn’t even have Rs 100. We have been struggling for our survival here.”

The Supreme Court is scheduled to hear 59 pleas against CAA on January 22 and its decision will be keenly awaited. Coming just a few months after the abrogation of Article 370 and the Ram Temple judgment, the BJP government’s handling of CAA or NRC will also come under increased scrutiny from the international media.

A vibrant democracy such as India is bound to see disagreements and debates, but protests must remain peaceful and the government humane. Tolerance and diversity have always been India’s core values and without them the Indian democracy cannot be resilient enough to withstand divisive forces. For now, there are lessons for both the government as well as the protestors.