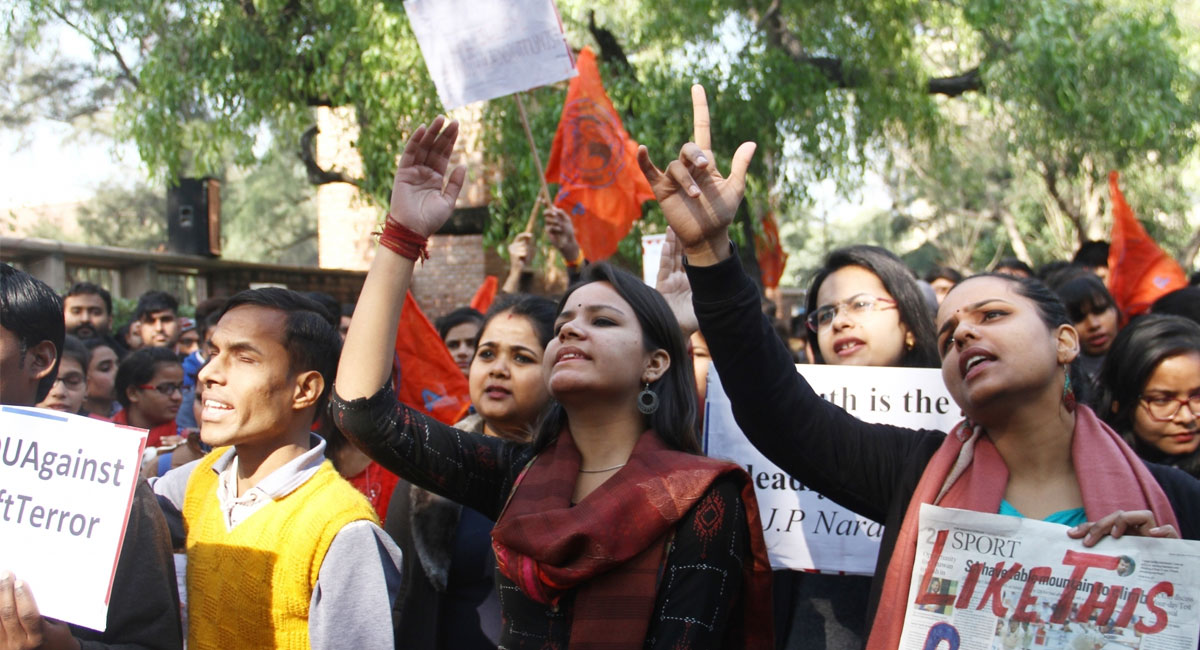 Long considered a premier institute for higher education and research in the country, Jawaharlal Nehru University recently turned into a battlefield between the Right and the Left wing as protests, masked mobs and violence plagued yet another educational institute in the wake of nationwide student protests against the Citizenship Amendment Act and National Register of Citizens.

Criticised for being heavy-handed during the protests that erupted in Jamia Millia University and Aligarh University last month, the Centre and the police now stand accused for doing little to stop the violence at JNU.

It was a minor scuffle between two groups of JNU students over registration in the new semester that turned the varsity campus into a combat zone, leaving several students and teachers severely injured.

The JNU may be making news for agitations and its long association with Left-wing politics, but it remains one of the top academic institutes and the only varsity among the top eight Indian institutes in the 2019 National Institutional Ranking Framework (NIRF).

The violence that shook the country as visuals of bleeding girls and injured teachers flashed on television screens began on January 3 when some students allegedly barged into the room used to provide power to WiFi connection to the entire campus and shut down the connection.

“At about 1 pm, some 15-20 students barged into the Centre for Information System and locked the doors from inside. The electric connection to WiFi devices were shut down by these students,” a JNU official said.

However from January 4, cases of minor scuffles started to rise, with the Left-controlled Jawaharlal Nehru University Students’ Union (JNUSU) alleging that protesters were beaten up by students aligned with the Rashtriya Swayamsevak Sangh-affiliated Akhil Bharatiya Vidyarthi Parishad (ABVP). These accusations were met by counter allegations by ABVP.

But the situation turned ugly on January 5 when about 20-25 students of the ABVP were thrashed and assaulted by unidentified students, who the ABVP alleged, were members of Left student organisations.

Soon after this incident, widespread violence broke out in the campus with students, including girls, assaulted in their hostel rooms by masked miscreants wielding wooden and iron rods and hostels vandalised. JNUSU President Aishe Ghosh was hit over her eye, with an iron road and taken to an hospital.

“I have been brutally beaten up by masked people. I don’t know who they were,” Ghosh said as she broke into tears while blood flowed profusely from her head.

At least 20 students were admitted to the AIIMS with severe injuries following the evening clash.

Hostel rooms, and lobbies, and vehicles standing on the road were vandalised during the assault.

There were terrifying moments for students as the masked men and even women with faces covered, barged into hostels, ransacked rooms and beat up the frightened students.

A girl student recounted those moments in tears: “I was in the room and I heard loud noises and I saw many girls coming. I asked everyone to lock their rooms. We were in terror. While I was trying to take a video clip, they hit me with a stone.”

The injured students blamed the ABVP for the violence. On the other hand, the ABVP blamed Left-affiliated students for earlier attacking its activists that had left several injured.

“Around four to five hundred members of the Left wing gathered around the Periyar hostel, vandalised the hostel and forcibly entered the hostel to thrash the ABVP activists inside,” ABVP’s JNU unit President Durgesh said.

The ABVP claims its presidential candidate Manish Jangid was injured badly and may have suffered a fractured hand after he was assaulted.

Some political observers say the problems at the university are not new and JNU has actually been under lockdown for over two months by Left parties after the varsity’s decision to increase hostel utility charges to account for a deficit that the University Grants Commission (UGC) refused to fund.

While eyewitnesses maintained that the flare-up could have been averted if the police had taken action on time, Special Commissioner of Police, R.S. Krishnaiah said that the police entered the campus only on the varsity administration’s request following the clash.

In the recent past, the JNU students’ protest over the fee hike led to the fee being substantially rolled back by the Human Resource Development ministry but the students moved onto the next demand — the removal of JNU vice-chancellor, M Jagadesh Kumar.

There has been trouble at the university ever since Kumar took charge in January 2016 from Sudhir Kumar Sopory as Vice Chancellor of JNU with many students and teachers demanding his removal. The JNU Teacher’s Association has been holding many protest rallies against the Vice Chancellor and its members were said to be brutally assaulted on January 5.

Meanwhile, the JNU Teacher’s Federation has accused the JNU Teacher’s Association of disrupting academic life on campus. In the politically charged atmosphere of JNU, a group called JNU Commons has come up in order to safeguard the intellectual autonomy of students and scholars and provide space to those who want to maintain a distance from political issues.

Even though the hostels in JNU are named after the rivers of India to represent the country’s unity, students and teachers on campus say the university is deeply divided today. Most people on campus have aligned themselves either to the Right or the Left.

Without a strong opposition, students have been at the forefront of protests against the CAA and NRC and the attacks on JNU campus have only led to many more protests across colleges and universities in other parts of the country, all condemning the manner in which students and teachers were targeted.

Delhi Chief Minister Arvind Kejriwal also said he was shocked by the violence. Interestingly, Kejriwal blamed the Centre for the violence at JNU as he defended the Delhi Police which has faced widespread criticism for failing to take action.

The BJP also condemned the violence, but called it a “desperate attempt by forces of anarchy” misleading students to achieve their own political goals.

“We strongly condemn the violence on JNU campus. This is a desperate attempt by forces of anarchy, who are determined to use students as cannon fodder, create unrest to shore up their shrinking political footprint. Universities should remain places of learning and education,” the party said in a tweet.

Opposition parties have blamed the Centre for the JNU violence, saying the BJP is muzzling all voices of criticism with the help of police and its supporters.

“Be it Jamia, JNU, students mustn’t face brutal force. Let them be! These goons must face action. They must be brought to time-bound and swift justice,” Aditya Thackeray, Maharashtra’s Tourism and Environment Minister, demanded.

The police is identifying the people who were involved in the university violence on the basis of videos and photos that went viral on social media platforms. Some JNU teachers have also been accused of leading the mob and helping them carry out the attacks.

Critics of the Left say the JNU is a Left dominated institute and its cadre hugely outnumber that of the ABVP and other non-Left parties. They believe members of the ABVP are being victimised by the Left and not the vice versa as reported in the media. In this political blame game, it is hard to say who can be held responsible for the JNU fracas.

The only thing one can say for sure is the palpable fear that common students feel at the country’s premier institute of education which is now mired in politics and controversy. Time may tell who will win this fight between the Left, Right and the Centre, but the losers either way will be the students of JNU.