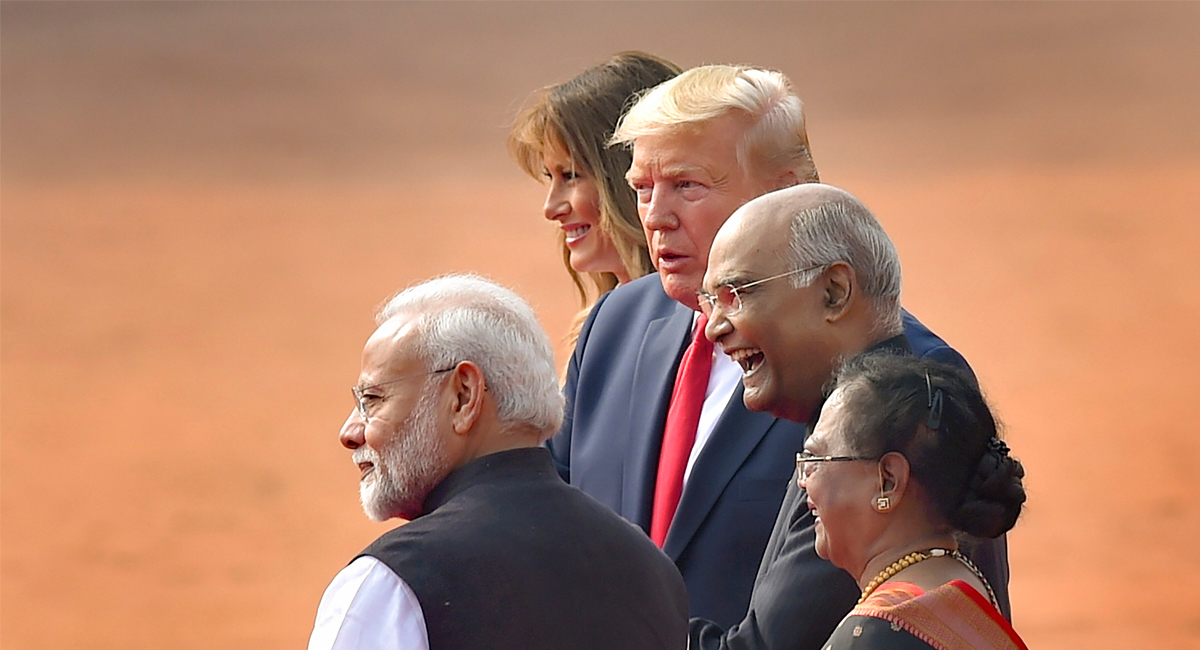 The American President’s state visit had all the right optics, but the US-India trade deal remains elusive

Many US Presidents have visited India before, but never has a state visit been such a huge spectacle as to make the entire world watch in awe. The biggest takeaway from Trump’s maiden state visit was that Indo-US relations have blossomed to the mutual advantage of the two largest democracies in the world.

If there is one world leader that cares about the size of the crowd, it is Trump – and Modi delivered on his promise of a huge audience. As Trump drove to the stadium from the airport, there were tens of thousands lined up on the streets of Ahmedabad to receive him and he later addressed a humungous crowd at the cricket stadium.

At the Motera stadium in Ahmedabad, Trump declared: “America loves India and will always be a friend of Indian people.” He referred to the landslide victory of Modi in the “largest democratic election ever held anywhere in the world” and described India as a “miracle of democracy” with its diversities, noble people and a tolerant character.

The optics of the state visit were important for both Trump and Modi.

As India rolled out the red carpet for the US President, Trump could boast of his popularity abroad during an important election year back home and also display his negotiating skills with a country he often refers to as the “king of tariffs”.

On the other hand, the Indian government, which is under heavy criticism for revoking Article 370 and the ongoing protests against the Citizenship Amendment Act (CAA) from the international media, was desperate for some good press as well as the much-talked-about trade deal.

In the end, no trade deal was signed but there were some important diplomatic victories beyond the spectacle of song and dance.

Political analysts believe Trump’s effusive terms of praise for the Indian leader will help Modi who is grappling with negative press internationally. This is especially important given many doubts have been raised on Modi’s leadership after violent protests and communal riots in Delhi claimed many lives recently.

The Modi government’s CAA and National Register of Citizens have been labelled anti-Muslim by liberals in India and abroad, but Trump made it a point to extol India for the freedom of worship that it gave to all communities.

Trump called Modi a “special friend” and said that the “Indo-US relationship was now inclusive and exhaustive and not just another relationship”. Listing the achievements of Prime Minister Modi’s governance he pointed out how “12 Indians were pulled out of poverty every minute” and how every village now had electricity.

Highlighting the new level of defence cooperation between US and India, he reiterated that he and Prime Minister Modi were working for the biggest economic deal — adding in jest that Modi was a tough negotiator.

Modi and Trump are both categorical in denouncing radical Islamic terror as the biggest threat to the two countries and Trump did not mince any words when it came to Pakistan, saying the latter must crack down on the terrorists operating from its soil.

In fact, the Trump administration’s zero tolerance towards Islamic terrorism is one of the key factors in the relationship India shares with America.

An impending trade deal between the two countries loomed large ahead of Trump’s visit and while no agreement could be reached, Modi’s image got a boost and he is now viewed as Trump’s equal.

Last year, the US had raised tariffs on goods imported from India and withdrew India’s preferential trade status under the Generalized System of Preferences (GSP), after which the Modi government retaliated by raising tariffs on 28 categories of goods that the US was exporting.

This bitter tariff war had strained relations between the two countries but observers say it is only a matter of time before the two countries sign a deal that would help bridge the US$25.2bntrade deficit with India.

However, Trump’s visit was just the impetus this relationship needed. India made sure that Trump did not go empty-handed and a deal worth US$3bn was sealed during his trip with India buying attack helicopters and other US military equipment.

Modi also signed a deal with Exxon Mobil which will see India importing more Liquified Natural Gas (LNG) from the US.

Though there were announcements from both sides to seal a larger trade deal at a future date, the US has been asking India to lower tariffs on many products, including almonds, chickpeas and bikes. It also wants greater access to India’s dairy and agriculture markets.

Earlier, Commerce and Industry Minister Piyush Goyal said India and the US could finalise a larger trade deal “much faster” and expressed hope they would soon be able to close the first set of limited trade package and its legal vetting.

“Hopefully, we will close the first set of the limited engagement that we have discussed and finalised. We will get into legal vetting and close that quickly,” he said at a CII event recently.

During his press conference at Hyderabad House, Trump said a trade deal was in the works, but did not elaborate.

Prime Minister Narendra Modi said the Commerce Ministers of both the countries had positive talks. “Both of us have decided that our teams should give legal shape to these trade talks. We have also agreed to open negotiations on a big trade deal,” Modi said.

The rise and growing influence of China is an important factor in the Indo-US ties and Trump subtly criticised the former many times. There is nothing that riles China more than the US referring to the region as Indo-Pacific instead of China’s preferred Asia-Pacific, and Trump did exactly that during his trip.

“During our visit we discussed the importance of a secure 5G wireless network and the need for this emerging technology to be a tool for freedom, progress, prosperity, not to do anything with where it could be even conceived as a conduit for suppression and censorship,” Trump said.

This was seen as an indirect swipe aimed at China as Washington has repeatedly raised doubts over the security of Chinese tech giant Huawei’s 5G technology.

Michael Kugelman, deputy director at The Wilson Center, said the President’s statement was not surprising.

“China really looms large in this relationship. You can talk about shared values, the Modi-Trump friendship, but it’s really the converging interests that bring the two countries together,” he says. “Both countries see China as a concern.”

“The US-India relationship has suffered through crude insults, harsh criticism, threats of punishment, dalliances with each other’s rivals, and failed negotiations. And yet it hasn’t only survived, it has thrived,” Kugelman stated.

Even though Trump offered to mediate on Kashmir once again during his visit, it was a minor digression given Trump’s effusive praise for Modi as a leader and India’s commitment to plurality. To India’s relief, the mercurial and outspoken US President refused to comment on the ongoing anti-CAA protests and rising religious intolerance.

If there were any concerns that Trump will chide a country that many now associate with muscular Hindu nationalism, they evaporated with Trump’s endorsement of Modi’s efforts in giving religious freedom to every community.

Political observers say Trump’s unpredictability is the biggest risk to the growing Indo-US relationship. But for now, Modi has done well to keep Trump on India’s side, something the country needs for strategic and security reasons.

While India enjoys a bipartisan relationship with the US, the immediate future of the relationship depends on the outcome of the US presidential elections later this year. Modi has been criticised for putting on a big spectacle for Trump while failing to clinch a comprehensive trade deal, but there is little doubt that the biggest success of the state visit was in reinforcing India’s credentials on the world stage and sealing the Indo-US strategic partnership.

Political analysts say Modi can be criticised for many things, but not his foreign and national security policies which have largely worked to the country’s advantage.

India’s position as a natural ally of the US has much to do with India’s performance economically and its credentials as a liberal democracy like America. However, experts warn that the current slowdown in India’s economic growth and the perceived deviation from its secular principles and liberalism could weigh on the relationship in the future.

After successfully hosting the US President, Modi may have come up trumps but there are challenges aplenty.