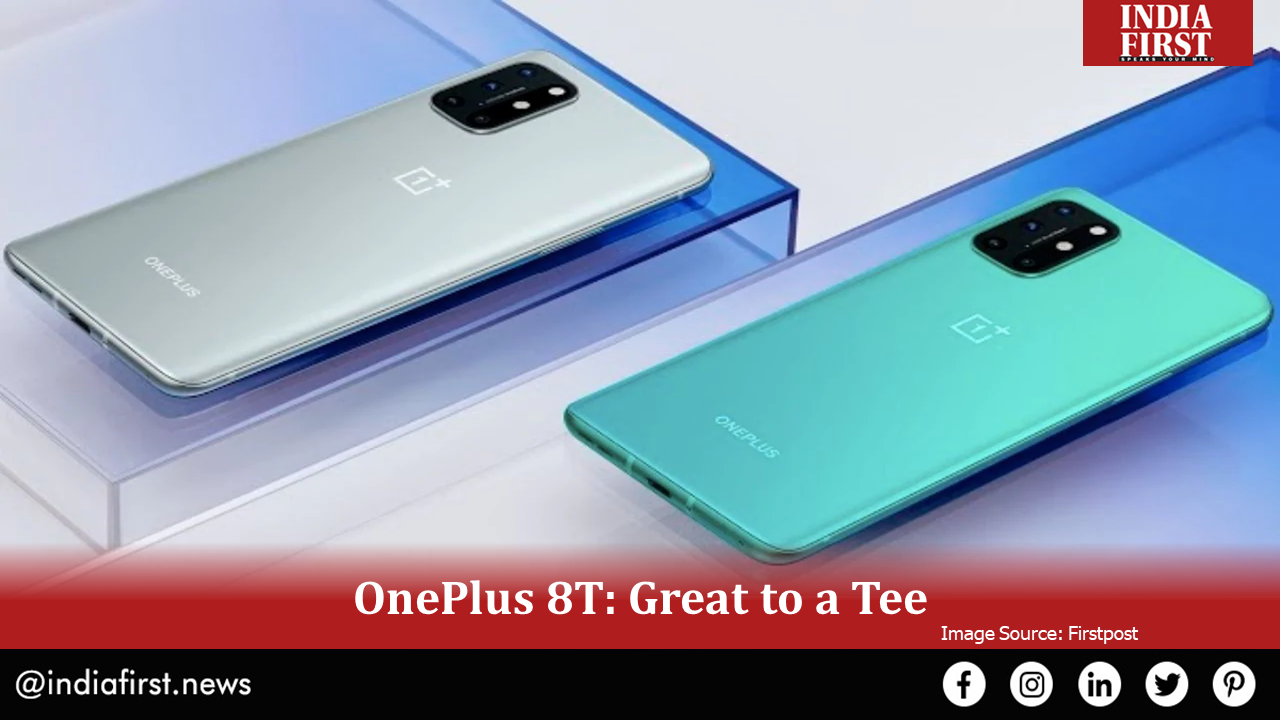 In line with its tradition of releasing a “T” series phone in the latter half of the year, OnePlus launched its latest smartphone OnePlus 8T on October 14. In terms of specifications, the newest addition to the OnePlus 8 series, the OnePlus 8T is one step ahead of its predecessor OnePlus 8.

This is the fourth smartphone to be launched by OnePlus this year and comes just weeks after the release of the OnePlus Nord. The OnePlus 8T boasts a glass back which is smudge-proof and has a glossy finish along with frames featuring an anodized aluminium finish.

The body comes fitted with an alert slider, stereo speakers and a Type-C charging USB port but lacks a headphone jack. The back has a quad camera setup which is the biggest yet of all OnePlus phones. The front camera is housed in a punch hole design and the front display has a 6.5-inch AMOLED screen which is vividly clear, giving the user an immersive experience while watching videos and films on the phone.

The Qualcomm 865 processor and 120 Hz screen makes it the fastest smartphone in the market which quickens the reaction time of the phone, accounting for a seamless gaming experience and a fast screen response. The Android 11 and Oxygen OS have improved the user experience making the phone run without any lags and adapting to the user’s needs. The Always-on Display can be customized as per the requirements of the user and can be a unique experience for each user. The transitions are smooth in the OnePlus 8T which makes it a delight to use.

The battery design and life of OnePlus 8T is an improvement on the existing OnePlus 8. The phone has two batteries instead of one which can be charged together and can be charged faster by the 65W WarpCharge system than its predecessor with a record of full charge in just 37 minutes. The phone also charges at a rate of 27W which is higher than the other phones in its segment. The charger of OnePlus 8T can be used as a multipurpose charger which can charge other compatible tablets and phones of other companies. The charger can be of great use for today’s professionals who use multiple gadgets at the same time.

Although the 48 MP camera can shoot in great detail, the rear camera shoots in 12 MP by default and the user has to alter it in the settings to amp it up to 48 MP. There is a new Nightscape mode that automatically improves the lighting when shooting in low light. The 5MP macro lens is upgraded from the 2MP lens of OnePlus 8 which was not that effective in shooting sharp images. The front camera is a 16 MP setup which clicks clear and vivid photos capturing every detail. Priced at Rs 42,999, OnePlus 8T is steal-worthy and a great gadget to own.