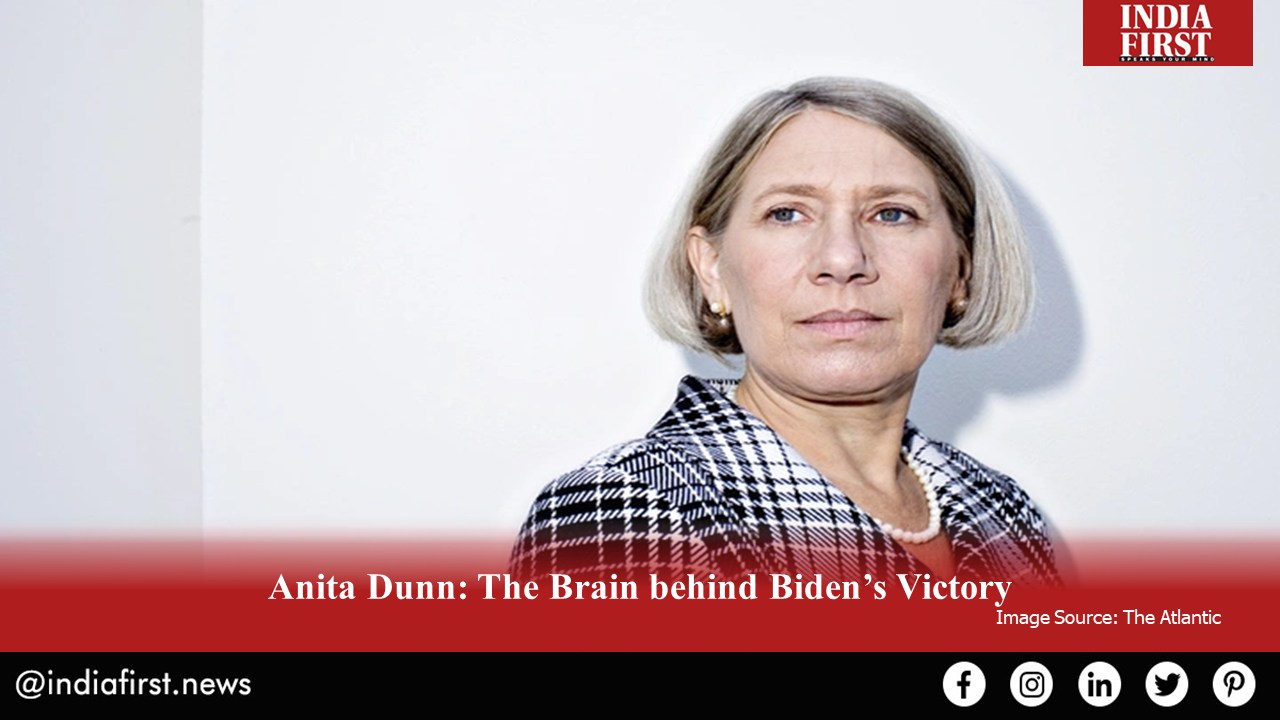 In Joe Biden’s journey from the former Vice President of America to its present President Elect, the steps have not just been of his own. Each step he took towards the Oval Office was constructed and calculated by his strong base of political advisors who hail from different ideologies. One of his chief advisors is Miss Anita Babitt Dunn, who is thought to have played a crucial role in Biden’s win. Dunn is an excellent political strategist and keeps an eye on the prevailing circumstances for the new President Elect. If Biden is the leader, Dunn is his trusted lieutenant in US politics.

It is believed that Dunn keeps a track of who meets the President Elect, who interacts with him, who has said what about him and she also has a big say on what is conveyed from Biden’s camp. It is said Biden used to forget who he had a problem with, but Dunn kept track of his rivals so that the Democrat could run his political campaign peacefully and effectively to reach his ultimate goal – the White House.

The expert political strategist who stayed out of national spotlight even after leading the mindpower behind six democratic presidential campaigns over a period of forty years, is clinical in her strategies and is known to have unparalleled focus when it comes to winning elections for the Democratic Party.

Dunn was instrumental in setting up for Biden’s presidential campaign an effective and experienced team of advisors who were diverse and dedicated to the goal. She will continue to advise Biden on recruitment of staff for running his administration during his time in the office. Not many are better qualified than Dunn in ensuring that the Biden administration is run smoothly and by capable hands.

Not much of a fan of the spotlight, Dunn is expected to keep working behind the scenes. Yet her remarkable achievements must make it difficult for her to do so. After all, she has been part of political advisory committees of two winning Democratic candidates, including Barack Obama and Biden. While most political advisors retire from the advising game after one successful campaign, treating it as the highpoint of their careers, Dunn went on to advise two presidential candidates successfully. After steering Biden’s presidential bid since February this year, the ace strategist is the only senior advisor who will not be working at the White House.

Even though Dunn will be working from the outside with the Biden administration, the people who know Dunn’s role in Biden’s team more closely are of the opinion that amid the different national and international crises that will demand Biden’s attention once he assumes office, Dunn will play an instrumental role in keeping the core team in check and helping them work effectively towards resolving the most pressing issues through her tactical prowess.

Dunn might be the lady behind Biden’s successful run for the White House, but whether she will work wonders for Biden once he becomes President is yet to be seen.