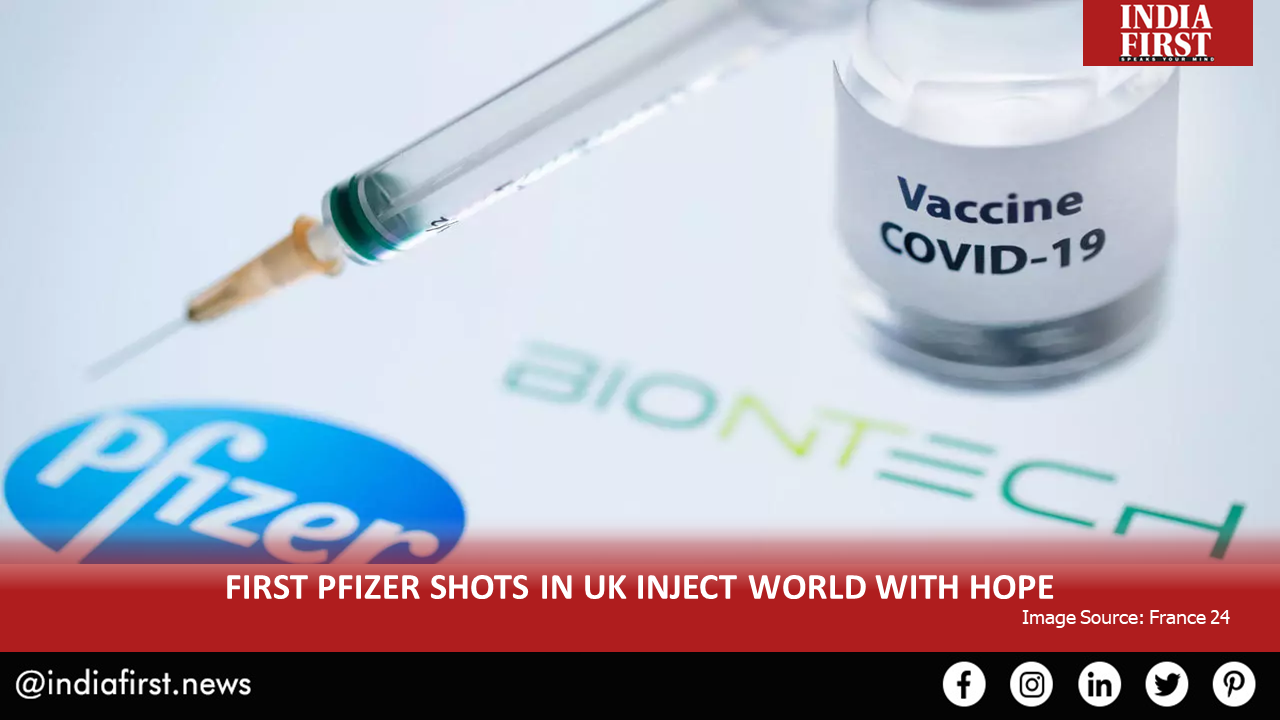 After becoming the first country to formally authorise a COVID-19 vaccine for mass immunisation, the United Kingdom started its immunisation drive on December 8. The country, which had been struggling with the deadly virus since early this year, was unable to control COVID-19 cases despite several lockdowns announced by the UK government, and was in dire need of the vaccine.

British Prime Minister Boris Johnson had himself tested positive for COVID-19 some months ago, and it was probably because of his struggles against the coronavirus that his government made it a point to grant rapid authorisation to the new Pfizer-BioNTech vaccine that claims a 95 percent efficacy rate.

The first person in Britain and also the world to be given the Pfizer vaccine outside trial conditions was a UK citizen and 90-year-old Margaret Keenan. At 6:31am local time, the former jewellery shop assistant, took first ever COVID-19 shot and created history.

Pictures and videos of the nonagenarian getting the injection made rounds in the media and were deemed as a historic moment, one heralding world free from COVID-19.

When asked about her feelings on being part of that moment, Keenan told the BBC that it was “overwhelming” and had not “quite sunk in yet”, but she was clearly pleased with what had just happened and expressed relief that she could finally meet her friends and family after having led a fairly isolated life since the start of the pandemic.

It was another iconic moment when Margaret was deservedly applauded by the doctors and nurses of the University Hospital in Coventry for the confidence she showed while taking her COVID-19 shot, because many people across the world have been wary of taking it and debates continue over whether it should be made compulsory for everyone.

The message that she shared with the world later was heart-warmingly optimistic. Margaret said as if she could take the vaccine at the ripe age of 90, then anyone should be able to do that. Her message will encourage those who have been apprehensive of a COVID-19 vaccine and are against the practice of vaccination.

The second person in the world to be vaccinated by the Pfizer vaccine was an 81-year-old namesake of legendary English writer and dramatist William Shakespeare. It was no surprise that this news started a series of light-hearted puns on social media.

This momentous day on the COVID-19 front had an Indian connection, too. Among the first persons to get vaccinated in the UK were 87-year-old Hari Shukla, a race relations campaigner, and Ranjan Shukla, his 83-year-old wife. They incidentally became the first Indian-origin couple in the world to get vaccinated against COVID-19 after taking their Pfizer jab at a hospital in Newcastle.

The two had been contacted by the Newcastle hospital after they met the requirements set for selection of the first lot of people to receive the vaccine. Sharing his vaccination experience, Shukla said he felt like he was doing his bit for the society when he and his wife agreed to get vaccinated under the biggest vaccination programme in Britain’s history. He also expressed optimism that Britain as well as the world will soon see the end of the COVID-19 pandemic.

The start of the world’s first mass immunisation programme against COVID-19 has certainly raised hopes for an end to the pandemic in the not-too-distant future.