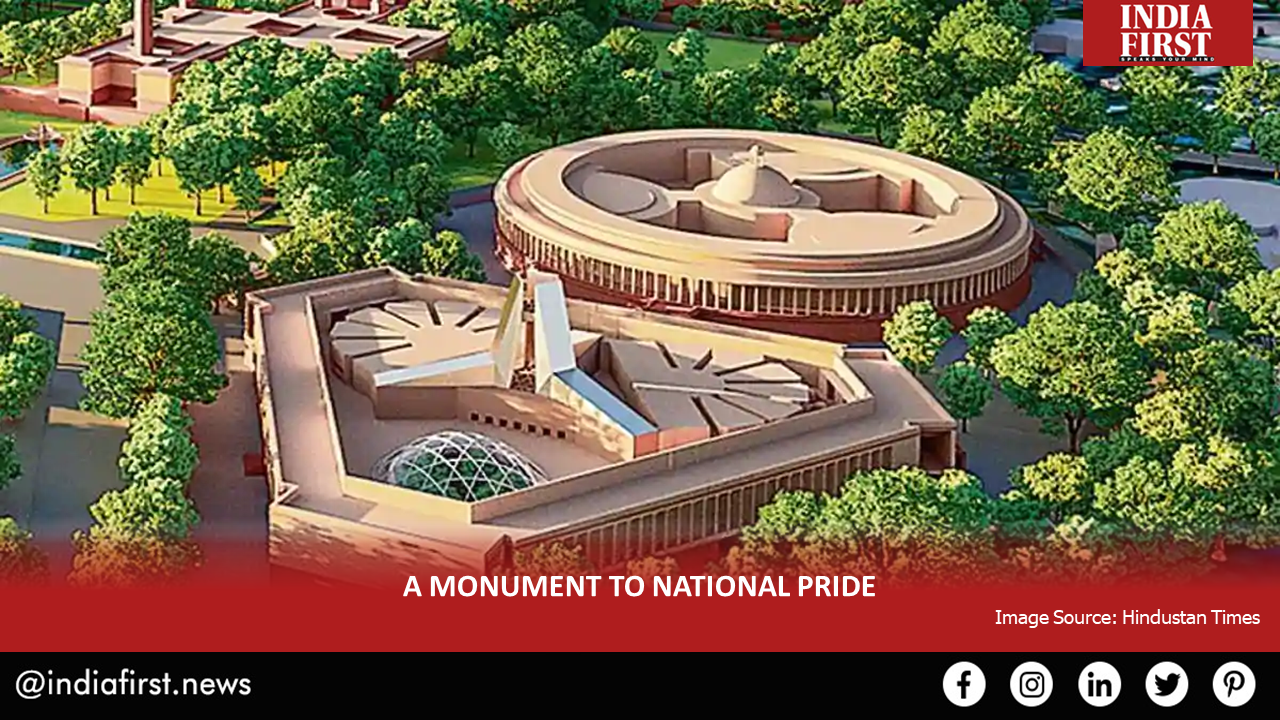 High on symbolism as well as practicality, the new Parliament building will reflect the indomitable spirit of the Indian people

Buildings and architecture are a reflection of not only the culture and history of a land but also the ethos and values of its people.

On December 10, during his address to the nation after laying the foundation stone and performing the ground-breaking ceremony for a brand-new Parliament building on the grand Central Vista in New Delhi, Prime Minister Narendra Modi got that message across to his fellow Indians and the rest of the world – loud and clear.

At the high-profile event, which was attended by Cabinet ministers, leaders from many political parties and envoys from various countries, Prime Minister Modi stated that while the old Parliament building “gave direction” to India after Independence, the new one will be “witness to the building of a self-reliant India”.

“In the old building, work was done to fulfil the requirements of the nation. And in the new building, aspirations of 21st century India will be realized,” he said, adding that future generations will be proud to see the new building as one that was constructed in independent India in the memory of 75 years of freedom.

After all, the current Parliament building had come up during the days of the Raj. The circular edifice, measuring 560 feet in diameter, was constructed over a period of six years during the 1920s at an expense of 83 lakh to house the Central Legislative Assembly and Council of State.

The 93-year-old building will remain forever precious, being the venue of many historic events – such as the transfer of rule from Britain to India, the country’s first Prime Minister Jawaharlal Nehru’s midnight speech on August 15, 1947, and the adoption of Constitution of India by the Constituent Assembly on November 26, 1949 – that shaped the spirit and foundation of the nation.

However, the Rs 970-plus crore triangular complex, expected to be ready by the time India celebrates its 75th anniversary of Independence in 2022, will stand tall beside its iconic predecessor over an area of 64,500 square metres for a plethora of purposes – both symbolic and practical.

While new four-storeyed Parliament building will incorporate indigenous architecture from all corners of India to highlight the country’s cultural diversity, its Constitutional Hall will showcase the nation’s democratic traditions. Just as Prime Minister said in his address, the new building will be a harmonious blend of the new and the old that will establish its place as a symbol of national pride.

The prayer preceding the Prime Minister’s speech, which featured representatives from all major faiths of the country, was a celebration as much as it was as a promise of India’s religious diversity.

As for the practical aspect, the plan for the new building impresses no less.

The Lok Sabha chamber will have an enhanced capacity of 888 seats and the Rajya Sabha of 384 seats. The current strength of the Lok Sabha is 543 and the Rajya Sabha 245. Once the new building is up and running, the Lok Sabha chamber will also have the option of boosting its seating capacity to 1,224 members during joint sessions. All this has been planned keeping in consideration the increase in the number of members for both houses in the future.

Second, the new building will be far more compatible with modern digital technology and hi-tech facilities than the nearly century-old current one ever possibly can. This will make it will more functional for members of the Parliament as their volume, scope, complexity and depth of legislative work has increased manifold over the past few years. Equally importantly, with improved resistance to earthquakes and terrorist attacks, the triangular complex will ensure better security for everyone within its premises.

Much to the government’s credit, the current structure will not just be conserved for its architectural value, but will also continue to be in use with due retrofits for various Parliamentary purposes.

Meanwhile, critics of the Modi government, particularly the Congress-led Opposition, have been accusing it of indulging in big-ticket projects at a time when public funds could be better used for fighting Covid-19 pandemic and bringing the nation’s derailed economy back on track.

Congress spokesperson Randeep Singh Surjewalla slammed the Prime Minister on Twitter, suggesting that history would not forgive him for “building a palace” at a time when farmers of the country were protesting for their rights outside the national capital.

However, if history is any indication, the new Parliamentary building is more likely to be remembered as a symbol of the indomitable spirit of an incomparably diverse nation that did not stop dreaming big even at a time when it was faced with the biggest nightmare that the world had ever seen in the past 100 years.