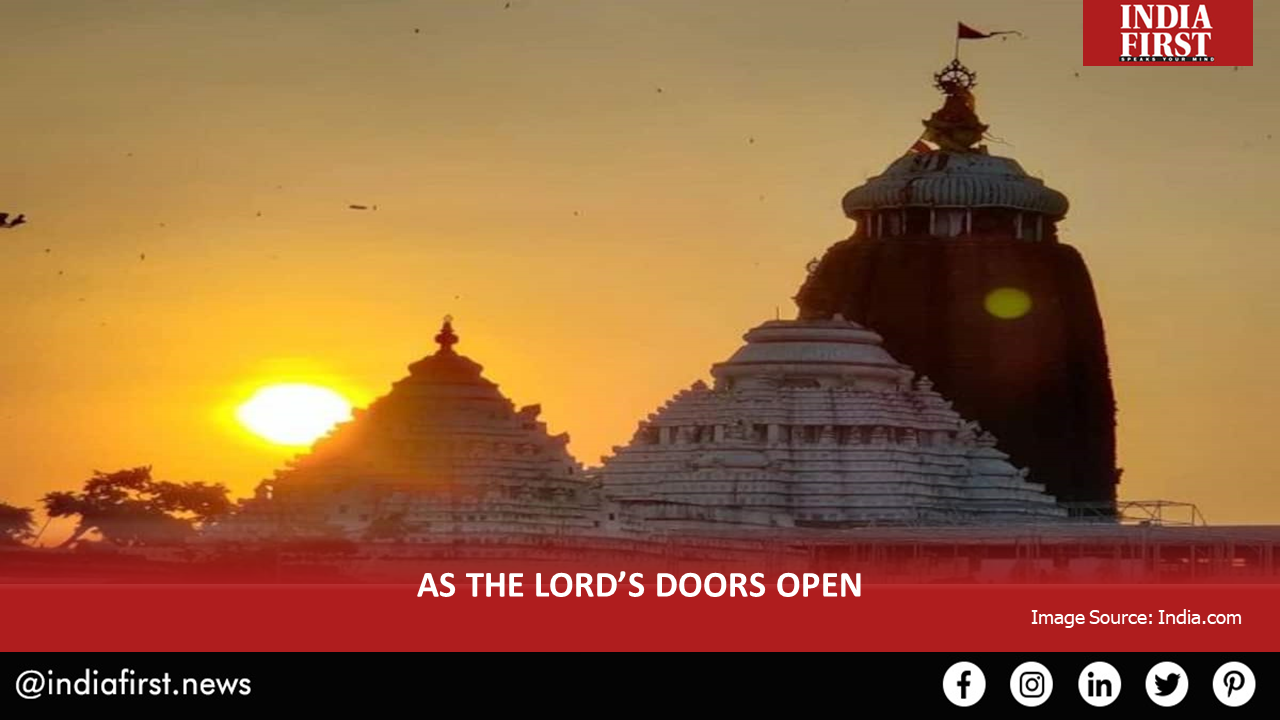 A new hope was born as the highly revered and world-famous Shree Jagannath Temple in Puri finally opened nine months after it was shut down due to the Covid-19 outbreak.

The reopening had been much awaited and long called for, what with the temple’s three presiding deities – Lord Jagannath, Balabhadra and Subhadra – having millions of staunch devotees.

However, with Odisha still facing the ever-present threat of cases spiralling out of control amidst an ongoing pandemic, it was anything but easy for the Naveen Patnaik administration to make a call on whether the time was right to open the doors of the nine-centuries-old holy shrine to the public.

The Opposition had been trying to capitalise on this dilemma. Citing the reopening of temples in Maharashtra, the state worst hit by the deadly virus, Odisha BJP leaders were increasingly badgering the ruling Biju Janata Dal government about its reluctance to open the Jagannath Temple in Puri.

Whether Maharashtra should be a reference point for Odisha in Covid-19 management, by any means whatsoever, is a different matter altogether. If anything, most experts would agree, it should be the other way around. The state BJP also projected the issue as a question of livelihood for thousands of servitors across the state.

Fortunately, drawing upon its vast experience in management of natural disasters, not to mention due consultations with the “Chhattisa Nijog” (premier servitors’ body of Shree Jagannath Temple), the Odisha government ingeniously settled on a middle ground: a “graded approach”, as Sri Jagannath Temple Administration Chief Administrator Krishan Kumar put it, to reopening of the temple – one that is logical, commonsensical and detailed in equal measure.

During the first three days of its opening (December 23-25), the temple shall be open exclusively to the servitors and their family members for darshan.  Over the next five days (December 26-31), only the residents of Puri – with a valid ID proof – shall get the opportunity to enter the temple.

While the temple will be shut again during the January 1-2 period to prevent the traditional rush of devotees from all over to Puri, which could potentially lead to a spike in Covid-19 cases, its doors will be open to all devotees – just as it used to be in pre-Covid times – from January 3 onwards.

However, those fearing another wave of Covid-19 cases as a result of this complete reopening may rest assured that not everything will be the same as before. Before the pandemic, throngs of devotees crowding the premises of the temple had become an everyday norm rather than being limited to holidays and special occasions. Fortunately, that is not going to happen anytime soon.

Giving priority to public health as usual, the Naveen Patnaik administration has put in place the strictest of Covid-19 protocols. In order to enter the temple, all devotees will need to present test reports – no older than 48 hours – declaring them COVID-negative. In addition to that it will be mandatory for them to sanitize their hands, wear masks and maintain social distancing during their visit. To minimise the possibility of the spread of the virus, devotees will not be allowed to even bring flowers, diyas and tulsi leaves, among other such typical offerings, into the temple.

The government has also laid down a special Standard Operating Procedure (SOP) to ensure that all devotees adhering to the COVID-19 guidelines have a hassle-free darshan. For instance, nine lanes have been set up outside the temple to avoid rush and crowding while allowing devotees to enter the Singha Dwara smoothly in queues.

Everything is meticulously planned. The district administration has already issued a ward-wise list –  with time slots allotted to each ward in the Puri Municipality area throughout the December 26-31 period – for locals to enjoy the privilege of their deities’ darshan in a safe and organised way before the rest of the world does.

If first day of the reopening was any indication, the government is going to make sure that the Covid-19 protocols and SOP are implemented religiously.

A sense of relief, delight and gratitude was palpable among the servitors and their families entering the sacred premises of the temple.

“We feel extremely blessed to have the first darshan of Lord Jagannath after what feels like almost a year. And we are very thankful to our government for letting all of this finally happen again in such a safe and smooth manner,” said an elderly family member of a servitor.

“The officials are very strict about the Covid rules, but they are also really helping us enjoy our visit,” she added.

Once again for the sake of safety, no more than 5,000 devotees will be allowed per day into the temple during the January 3-10 period. Then, depending on how things go in terms of crowd management and people’s adherence to the rules, the daily numbers will be gradually increased in subsequent weeks.

The Naveen Patnaik government could not possibly have found a smarter and wiser way of dealing with such a complex set of circumstances. That is reason enough for the people of Odisha to be filled with fresh hope as they look ahead to a new year amidst still uncertain times.