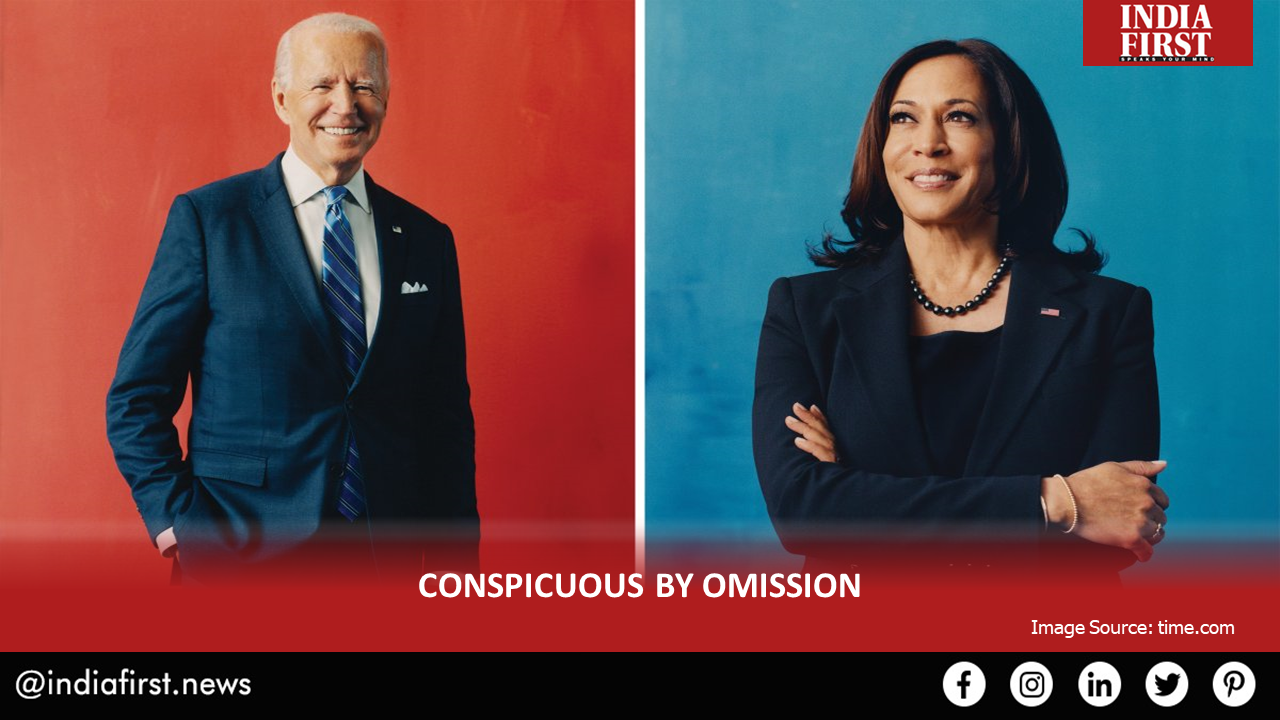 In his maiden foreign policy speech, US President Biden has curiously not spelled out anything on what he expects of India.

After the Donald Trump era, the world had been waiting to see how different things will be in the regime of US President Joe Biden. India was no exception.

However, in his agenda-setting foreign policy speech yesterday, President Biden has declared China as the principal adversary of America without mentioning the role of the Indo-Pacific region or of India in confronting the Dragon.

The US will “take on directly the challenges posed” to “our prosperity, security, and democratic values by our most serious competitor, China”, Biden said in his speech at the State Department yesterday.

“American leadership must meet this new moment of advancing authoritarianism, including the growing ambitions of China to rival the US.”

The strong language was a turnaround from his globalist past as Senator and Vice President and his campaign statements such as these: “They’re not competition for us” and “China is going to eat our lunch? Come on, man”.

He did not lay out a concrete plan in his speech to take on the China challenge, but spoke in generalities.

“We will compete from a position of strength by building back better at home, working with our allies and partners, renewing our role in international institutions, and reclaiming our credibility and moral authority, much of which has been lost.

“But we are ready to work with Beijing when it’s in America’s interest to do so,” Biden added.

His predecessor Donald Trump had made the Indo-Pacific region, the main theatre of confrontation, a focus of his strategy on China with the Quad – US, India, Japan and Australia – as an emerging force there, an alliance of democracies bookended by Washington and New Delhi.

Biden did not mention the Indo-Pacific or, while speaking of allies, the Quad or India.

But he mentioned his conversations with the leaders of Japan, South Korea and Australia in the region with a view to “rebuilding the muscle of democratic alliances that have atrophied over the past few years of neglect”.

Biden is yet to speak to Indian Prime Minister Narendra Modi.

However, two foreign policy leaders in his administration, Secretary of State Antony Blinken and National Security Adviser Jake Sullivan have spoken of the importance of the Indo-Pacific and India.

Blinken “underscored India’s role as a pre-eminent partner of the US in the Indo-Pacific” in his discussions with Indian External Affairs Minister S. Jaishankar, according to the State Department.

The White House said that when Sullivan called his Indian counterpart Ajit Doval, they spoke about “continuing close co-operation in the Indo-Pacific region and promoting regional security”.

Biden listed climate change and Russia as his other global adversaries.

He said that he was “integrating climate objectives across all of our diplomacy” and raising the targets for reducing carbon emissions so that “we can challenge other nations, other major emitters”.

The President said the US must deal with “the determination of Russia to damage and disrupt our democracy” and its days of “aggressive actions – interfering with our elections, cyberattacks, poisoning its citizens – are over. We will not hesitate to raise the cost on Russia and defend our vital interests and our people”.

In Europe, Biden said that the US was halting the withdrawal of 12,000 troops from Germany that was ordered by Trump.

Glaring omissions in his speech were Israel, with which Trump strengthened the already close relations between the two nations; Afghanistan, where a rocky peace process is under way between the US, the Taliban and the elected government in Kabul; and Iraq, which the US and its allies had invaded with Biden’s backing.

Trump had also ordered a withdrawal of US troops from Afghanistan and Iraq.

Biden said that Defence Secretary Lloyd Austin will “lead a Global Posture Review of our forces so that our military footprint is appropriately aligned with our foreign policy and national security priorities”.

Promotion of democracy was theme woven into his speech.

The US will “rally the nations of the world to defend democracy globally, to push back the authoritarianism’s advance”, he said.

Although during his campaign, he had criticised Trump’s “America First” policies, Biden presented his own vision of America primacy, the world’s dominant power setting the global agenda.

But in a major shift, he said that he would achieve that through cooperation with other countries and through diplomacy.