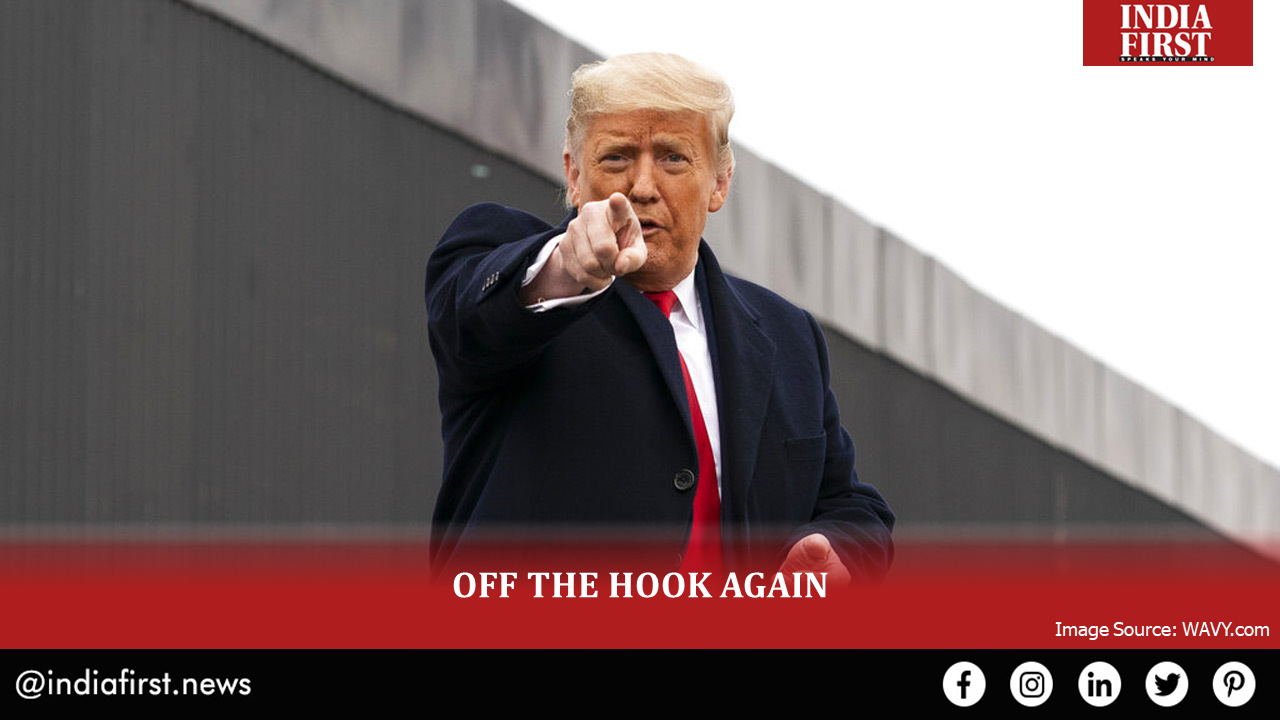 Former US President Donald Trump has been acquitted in his second impeachment trial since last year, but is unlikely to earn any respect from it.

Former US President Donald Trump has been acquitted for a second time by the Senate after Republicans overwhelmingly voted against convicting him on the charge of inciting the January 6 riot at the Capitol, but senior party leader Mitch McConnel blasted him soon afterwards for provoking it.

The Senate voted 57 to 43 to convict him yesterday and although seven Republicans went over to the Democrat’s side to convict him, it was 10 votes short of the 67 needed for the two-thirds majority needed for conviction.

The other Republicans stood firmly by Trump, thwarting his conviction, although after the vote McConnell delivered his harsh criticism pinning on him the blame for the riot that killed at least five people including a police officer.

Two other police officers died in its aftermath.

In his first trial in February last year on the charges of abuse of power and obstruction of Congress he went free because the Democrats could not muster 67 votes.

If Trump can claim a victory, it was tarnished by his own party members blaming him for the riot, even as they voted against his conviction.

“There is no question, none, that President Trump is practically and morally responsible for provoking the events of the day,” McConnell said after he had voted to acquit him.

He said that his vote against conviction was based on a technicality that under the Constitution Trump could not be impeached by the House of Representatives and tried by the Senate because he was out of office.

Most Republicans and Trump’s lawyers argued that since the Constitution specified the president as one of those who can be impeached with the punishment of being removed from office, he could not be tried as he was now a private citizen.

Democrats and their Republican supporters, however, said that although he was no longer the President, he could still be impeached and face the penalty of being barred from running for office.

The Democratic Party leader in the Senate, Chuck Schumer condemned the Republicans who voted against the conviction.

“The failure to convict Donald Trump will live as a vote of infamy in the history of the US Senate,” he said.

Reacting to the acquittal, President Joe Biden said: “This sad chapter in our history has reminded us that democracy is fragile. That it must always be defended. That we must be ever vigilant. That violence and extremism has no place in America.

“While the final vote did not lead to a conviction, the substance of the charge is not in dispute. Even those opposed to the conviction, like Senate Minority Leader McConnell, believe Donald Trump was guilty of a ‘disgraceful dereliction of duty’ and ‘practically and morally responsible for provoking’ the violence unleashed on the Capitol.”

Trump has disputed the results of the November 3, 2020, election that he lost alleging that there was massive fraud.

On the day of the riots, he held a rally of his supporters at which he repeated the fraud claim saying that the election was “stolen” and told them “we fight like hell and if you don’t fight like hell, you’re not going to have a country anymore”.

Some of his supporters later marched to the Capitol while Congress was tallying the votes of the electoral college that elected Biden.

A section of them broke through the security and stormed the building, breaking into the Senate chamber and the offices of leaders like Speaker Nancy Pelosi.

Mike Pence, who as the then-Vice President was presiding over the Senate, and other members of Congress were hustled away to safety.

“The former president tried to overturn the results of a legitimate election and provoked an assault on our own government,” Schumer said of the attack while Congress was completing the election process.

It was “the most despicable act that any president has ever committed”, he added.

The House impeached Trump on January 13 and sent the charge of inciting an insurrection to Senate to hold the trial with the Senators acting as jurors.

Biden had indicated that he wanted a quick end to the impeachment so the Senate can take up his agenda of rebuilding the nation after the Covid-19 pandemic and also approve the nomination of key members of his administration.

The Republicans also wanted a short impeachment to enable them to put the Trump era behind them.

After two days of Democratic Party arguments during the trial with videos of the riots interspersed with clips of Trump speaking to his supporters, Trump’s lawyers gave a short presentation on February 12 defending him.

But yesterday morning, when the Senate was expected to have short concluding arguments by both sides and vote on the conviction, Jamie Raskin, the lead prosecutor, sowed confusion by demanding to call as a witness Republican Representative Jaime Herrera Beutler who had claimed that Republican party leader in the House, Kevin McCarthy, had told her that when he spoke to Trump about the rioters breaking into the Capitol he appeared to condone it.

The Senate voted to call witnesses, but Trump’s lawyers scored a minor victory when they forced the prosecutors to back off from calling witnesses.

Trump’s lawyer Michael van der Veen threatened to call 100 witnesses, including Vice President Kamala Harris and Speaker Pelosi, with likelihood of the trial stretching indefinitely and if the Democrats blocked his request it would give the impression that the trial was unfair.

Under pressure from Democratic leaders who did not want to prolong the trial, the prosecutors dropped their demand for witnesses and instead agreed to only have Beutler’s statement included in the record of the proceedings.

On the night of February 12 when the trial seemed ready to wrap up, Beutler had said: “When McCarthy finally reached the president on January 6 and asked him to publicly and forcefully call off the riot, the President initially repeated the falsehood that it was Antifa that had breached the Capitol.”

The Antifa are anti-fascists made up of extreme leftists and anarchists, who have attacked government and public property, especially in Washington and Oregon states.

She said: “McCarthy refuted that and told the president that these were Trump supporters. That’s when, according to McCarthy, the President said: ‘Well, Kevin, I guess these people are more upset about the election than you are’.”

The prosecutors drawn from the House, who are technically called House Managers, made appealed to emotions with the videos, making the Senators, and the rest of the nation, relive the harrowing attack on the Capitol.

They linked Trump’s questioning the legitimacy of the election even after about 50 cases challenging it had been thrown out by courts and his exhortations to his supporters to “fight like hell” to the riots.

Trump’s lawyers mostly centered their defence on his constitutional rights to free speech in questioning the election and asserted that while he wanted his supporters to protest, he did not want them to riot.

They cited another part of his speech in which he said: “I know that everyone here will soon be marching over to the Capitol building to peacefully and patriotically make your voices heard.”

They also said that Democratic leaders had also told their supporters to “fight like hell” and it wasn’t to be taken seriously.

Democrats knew from the beginning that their impeachment would likely end in Trump’s acquittal, but they went ahead to avenge their humiliations by Trump and to derail the Republicans in next year’s mid-term elections.

Even Republicans like McConnell, who had criticised Trump for continuing to question the election and blamed him for the riots, could not vote to convict him because the former President still has the loyalty of his supporters who are a core element of the party.

Republican leaders are now caught between keeping the support of Trump’s base, while not alienating the moderates disgusted by the attack on Congress.

Having voted against conviction to placate Trump’s supporters, they feel free to criticise him to appeal to the moderates.

But Trump threatens to continue to haunt them.

He said after the acquittal: “Our historic, patriotic and beautiful movement to Make America Great Again has only just begun. In the months ahead I have much to share with you, and I look forward to continuing our incredible journey together to achieve American greatness for all of our people.”