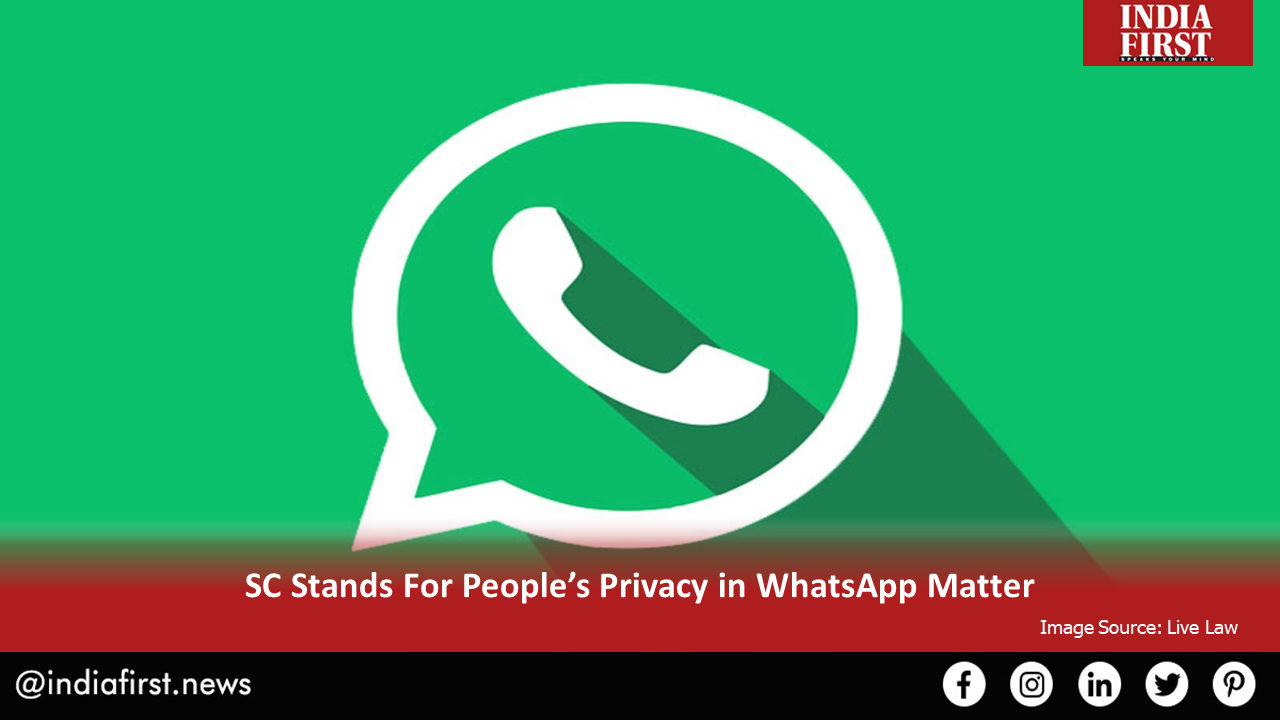 As the Supreme Court heard an application against WhatsApp’s new privacy policy today, it noted that people have grave apprehensions about loss of privacy and stated that it is its duty to protect this right.

At this, Chief Justice S.A. Bobde replied: “We will issue notice in the matter.”

A bench, headed by the Chief Justice and comprising Justices A.S. Bopanna and V. Ramasubramanian, told counsel for WhatsApp: “People have grave apprehensions about loss of privacy. You may be a 2 or 3 trillion dollar company, but people value their privacy more than your money… we have to protect people’s privacy.”

The top court issued notice to WhatsApp and Facebook on this plea against its new privacy policy.
Senior advocates Kapil Sibal and Arvind Datar, appearing for WhatsApp, strongly contested Divan’s argument, saying that the Delhi High Court is already seized of the matter.

Sibal said that Europe has a different set of data privacy laws, and WhatsApp’s new privacy policy for India is similar to policy applicable in the US, Australia and other countries. “The fact is that this policy is applicable to the rest of the world except Europe.. In Europe, it is different because they have a special law,” he argued.

Solicitor General Tushar Mehta, representing the Centre, said the right to privacy is a fundamental right and they cannot compromise with the privacy of people.
Divan cited that WhatsApp has already delayed the implementation of its new privacy policy till May 15 this year and sought a notice which is returnable before this date. The bench said it is impressed with Divan’s submission that while the Data Protection Bill is about to be brought into force, WhatsApp is framing a policy to share data. Datar also said that the messages are encrypted end to end.
The top court directed WhatsApp and Facebook to file their statement contesting the contentions in the present application.
The Chief Justice told WhatsApp counsel that people think if a message is sent from a person to another and then to a third person, the whole thing is disclosed to Facebook.
As counsel contended that this is not happening, Chief Justice Bobde disagreed, saying that they are telling information heard and read through news reports, and if WhatsApp disagrees, it should clarify this on oath.
The top court noted that it will have to consider if a similar petition, pending before the Delhi High Court, is maintainable when the apex court’s constitution bench is already seized with the matter wherein WhatsApp’s 2016 privacy policy has been challenged.
After a detailed hearing in the matter, the top court issued notices to WhatsApp, Facebook and the Centre in the matter and fixed for further hearing after four weeks.