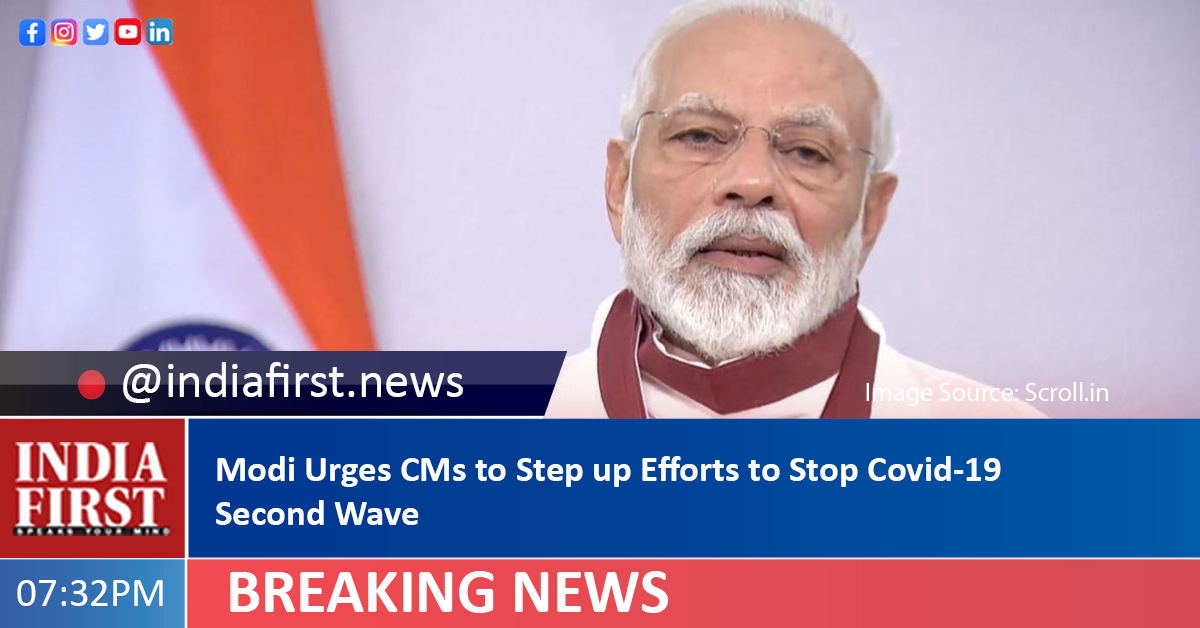 Meeting Chief Ministers today amid growing alarm over resurgence of Covid-19, Prime Minister Narendra Modi has urged them to act fast against the emerging “second peak” of the pandemic, warning “if we do not stop this now, a country-wide outbreak can occur”.

He called for taking quick and decisive steps for stopping this “second peak” of Covid-19 virus, in the meeting held via videoconference.

Stressing the importance of solving problems of local governance, he warned that the confidence which came from the achievements in the battle against Covid-19 should not turn into negligence as he expressed concern about the high positivity rate in Maharashtra and Madhya Pradesh, with 70 districts witnessing a 150 per cent rise in the last few weeks.

“Stop this emerging second peak of corona immediately,” he urged the Chief Ministers.

At the same time, Modi stressed that the public should not be brought to panic mode.

The Prime Minister noted the need for provision of micro containment zones and to be serious about ‘Test, Track and Treat’ as “we have been doing for the last one year”.

“It is very important to track every infected person’s contacts in the shortest time and keep the RT-PCR test rate above 70 per cent. More RT-PCR tests should be done in the states like Kerala, Odisha, Chhattisgarh, and Uttar Pradesh, which give more emphasis to Rapid Antigen Tests.”

The Prime Minister urged to increase testing and to pay special attention to the “referral system” and “ambulance network” in small cities.

“This is because now the whole country has opened up for travel and the number of people travelling has also increased. There is need for a new mechanism for sharing information among people,” he said, focussing on responsibility of following SOPs for surveillance of the contacts of the travellers coming from abroad.

The Prime Minister also said mutants of coronavirus must be identified and their effects assessed.

Lauding the increased pace of vaccination in the country and the vaccination numbers crossing more than 3 million in a single day, he, however, warned that the problem of vaccine doses wastage must be taken very seriously.

Citing the vaccine waste in Telangana, Andhra Pradesh and Uttar Pradesh to the tune of 10 per cent, Modi sought immediate correction in the drawbacks of planning and governance at the local level to reduce this.

The challenge of maintaining Covid-appropriate behaviour in the general public was also discussed, in light of the recent rise in the number of cases in some states. The Chief Ministers agreed on the requirement of greater vigilance and monitoring of the situation.

The Prime Minister also told the Chief Ministers that more than 96 per cent of the cases in India have recovered and India has one of the lowest fatality rates in the world, as he stressed the basic steps – wearing masks, maintaining physical distance and taking care of cleanliness – to prevent the spread of this infection should not be abandoned.

There should be no laxity in such steps and people’s awareness will have to be raised on these subjects, he said. He also called for increasing the number of vaccination centres.

The Prime Minister further asked the Chief Ministers to stay vigilant about the vaccine expiry date.