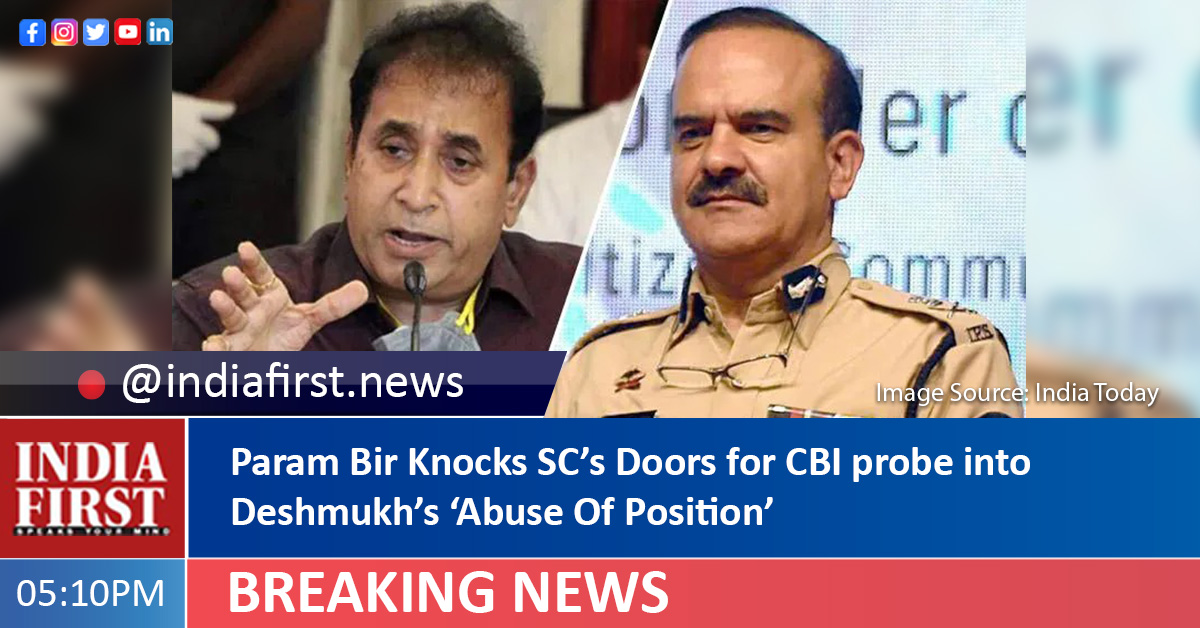 Former Mumbai Police Commissioner Param Bir Singh has moved the Supreme Court stating that Maharashtra Home Minister Anil Deshmukh has been interfering in various investigations and sought the CBI to immediately conduct an unbiased, uninfluenced, impartial and fair investigation in the various corrupt malpractices carried out by Deshmukh.

Singh urged the top court to quash his transfer orders, which he has termed “illegal and arbitrary”, and order a CBI probe to be carried out immediately before evidences are destroyed.

Singh’s plea contended that since February 2021, Deshmukh had been holding meetings at his residence with police officers – including Sachin Vaze of Crime Intelligence Unit, Mumbai and Sanjay Patil, ACP Social Service Branch, Mumbai – bypassing their seniors. The plea claimed that Deshmukh had instructed them that he had a target to accumulate Rs. 100 crores every month and directed them to collect money from various establishments and other sources. The plea has made the Maharashtra government, the Ministry of Home Affairs and the CBI as respondents in the matter.

Singh also sought directions to respondents to immediately take in its custody the CCTV footage from Deshmukh’s residence.

“Anil Deshmukh had been interfering in various investigations and was instructing the police officers to conduct the same in a particular manner as desired by him … Fair CBI investigation is thus warranted in each of such acts of Anil Deshmukh in abuse of the official position of the Home Minister,” said the petition.

Singh said he had brought Deshmukh’s corrupt practices in the knowledge of the senior leaders and the Maharashtra Chief Minister. Singh claimed after making such a startling revelation, he apprehends malicious and coercive actions against him at the instance of disgruntled home minister.

“Immediately thereafter, on March 17, 2021, an order vide notification of the Home Department of the Respondent No. 1 (Maharashtra government)…was issued, by virtue of which, the petitioner herein was transferred from the post of the Police Commissioner of Mumbai to the Home Guard Department in an arbitrary and illegal manner without the completion of the minimum fixed tenure of two years”, said the plea, terming the transfer malicious.

Justifying Singh’s transfer, the Maharashtra government had said it was done to ensure a free and fair investigation in the Antilia incident leading to an FIR registered on February 25, with Gamdevi Police Station as a result of a car with explosives being found at Altamount Road near Antilia, the residence of industrialist Mukesh Ambani, for a bomb scare.

Both the NIA and the ATS are investigating the matter. Sachin Vaze, officer of Crime Intelligence Unit, Mumbai, has been arrested for custodial interrogation by NIA.