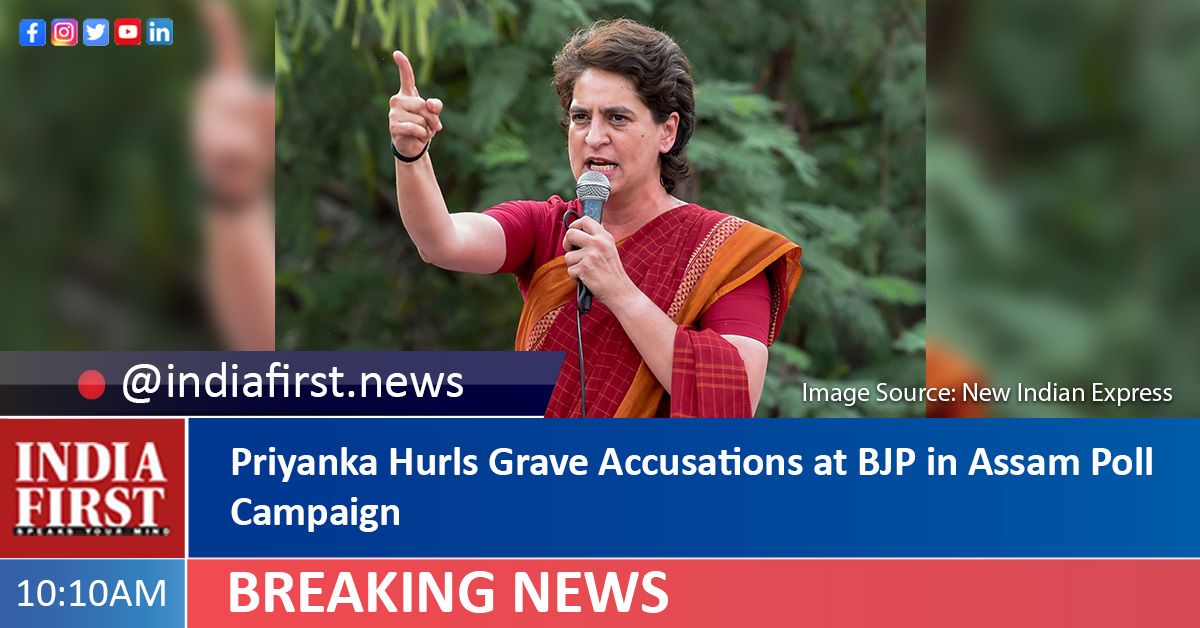 Congress General Secretary Priyanka Gandhi Vadra has claimed that the BJP governments in Assam and at the Centre have been selling endangered animals and strategic assets to their close friends for which the saffron party must be voted out of power in the coming Assembly elections in the northeastern state.

Addressing three election rallies at Sarupathar, Kaliabor and Nagaon in central Assam, Priyanka said the BJP has been selling a range of things, from black panthers to ONGC, airports and other public assets, to the friends of party leaders for their benefit, forgetting the interests of the people and the nation.

Last month, the opposition Congress in Assam had strongly condemned the transfer of two black panthers from the state zoo to a private zoo in Gujarat.

The Congress General Secretary said that her party has been opposing the Citizenship (Amendment) Act (CAA) across the country as it would split the society and create unrest in the country.

“The BJP leaders, while campaigning in West Bengal, Tamil Nadu, Kerala and Assam, are making contradictory statements about the implementation of CAA,” she claimed.

Congress leader Rahul Gandhi had released the party’s manifesto for poll-bound Assam on March 20, in which the main promises include restarting the process of National Register of Citizens (NRC), repealing the CAA, Rs 365 daily wage to tea garden workers, 5 lakh jobs in five years, Rs 2,000 per month to housewives and 200 units free electricity per household.

Elaborating on the party manifesto, Priyanka alleged that the BJP government has cheated lakhs of poor tea garden workers despite promising to increase the daily wages of 10 lakh tea estate workers to Rs 350 a day.

“The BJP had forged an electoral alliance with the Bodo People’s Front and the Asom Gana Parishad. It came to power in Assam with their help, but then it weakened both the parties by adopting various strategies.”

She also said that no party is concerned about the women, especially those in the rural areas.

“That’s why the Congress promised to give an allowance of Rs 2,000 per month to the housewives of every household. The Congress’ ‘five guarantees’ will be fulfilled after the party forms the government in Assam following the elections.”

Addressing an election rally along with Priyanka in Nagaon, Chhattisgarh Chief Minister Bhupesh Baghel, who is also one of the star campaigners for the Congress, said that his government had waived loans of 18 lakh farmers besides purchasing rice from the farmers at the rate of Rs 2,500 per quintal against Rs 1,000 per quintal in Assam.

“My government is also purchasing cow dung at the rate of Rs 2 per kg, benefiting lakhs of farmers, shepherds and cowherd,” he added.

Priyanka, who arrived in poll-bound Assam for a two-day visit on March 21, addressed six election rallies during her stay besides visiting the birthplace of Srimanta Sankardeva in Bordowa Satra.

Sankardeva was a 15th-16th century Assamese saint, scholar, poet, playwright, social-religious reformer and a figure of importance in Assam’s cultural and religious history.

The 126-member Assam Assembly will go to the polls in three phase on March 27, April 1 and April 6. The results will be declared on May 2.