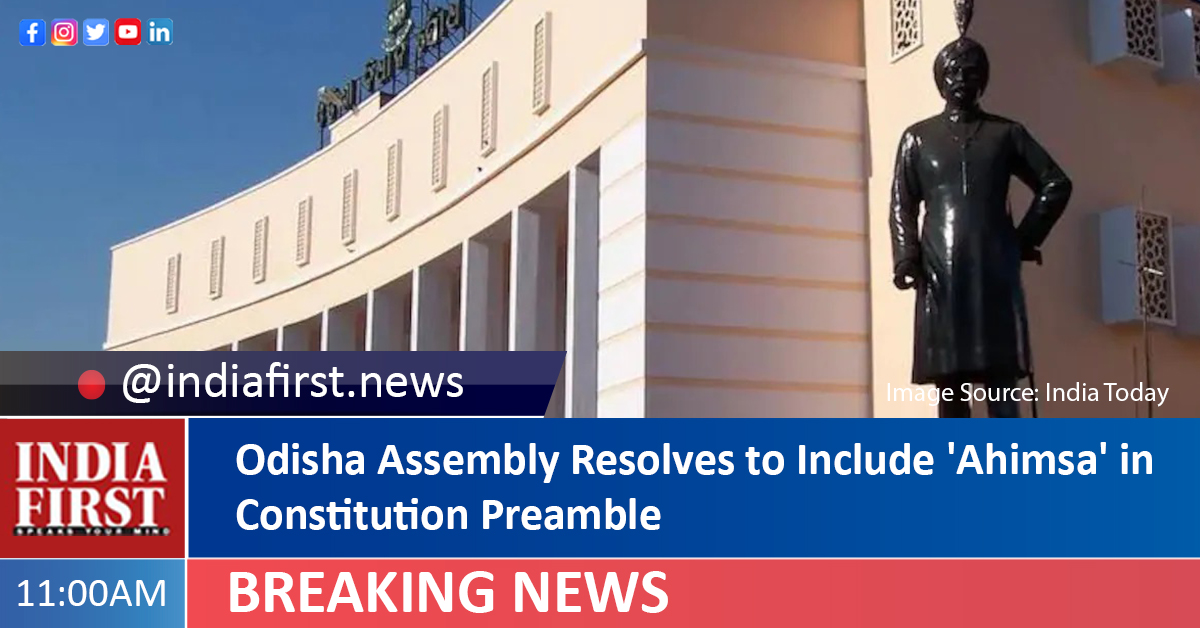 The Odisha Assembly has unanimously passed a resolution to include the word ‘Ahimsa’ (non-violence) in the Preamble of the Constitution of India.

The resolution was passed commemorating the 100th anniversary of Mahatma Gandhi’s first visit to Odisha on March 23, 1921. The Mahatma visited Odisha eight times.

The House discussed various aspects of Mahatma Gandhi’s visit to Odisha during the first hour of the day.

Chief Minister Naveen Patnaik said Odisha had a special place in the heart of the Father of the Nation.

“Of all the things that this country has given to the world, Gandhi’s philosophy and his message stands out as one of its greatest contributions,” he said.

He said Gandhi’s emphasis on the shunning of individual greed and his exhortation to think of the community is the reminder that the world needs.

“There is also an increasing polarisation and divisiveness globally. Gandhi’s commitment to pluralism and his message of tolerance and harmony is as relevant now as it was then. The Mahatma’s non-violent resistance is a spark that ignited peaceful movement around the world,” he added.

Quoting Martin Luther King, JR, the Chief Minister said, “If Humanity is to progress, Gandhi is inescapable… We may ignore at our own risk”.

Patnaik said this statement was relevant for today’s world as well.

The Chief Minister said the state government was totally committed to the principles and ideals of Mahatma Gandhi and renaming the state secretariat as “Loka Seba Bhawan” was not a symbolism.

Participating in the debate, leader of opposition Pradipta Kumar Naik said tributes to the Mahatma can only be reflected in ways we all have lived up to inculcate his doctrines in our lives.

He said Gandhi’s philosophy needed to be reflected in the government’s policies.

Naik also raised the issue of excess liquor sale and illegal cattle trafficking from the state.

The state government is pursuing a policy of gaining taxes from alcohol sale, rewarding people who sell more alcohol. What kind of tribute is paid to Gandhiji, asked the opposition leader.

Congress legislature party leader Narasingha Mishra said the people, who are inspired by the ideology of Gandhi’s assassin, are ruling the country.

Saying that people have started forgetting Mahatma Gandhi, he said life and his teachings should be taught in schools.