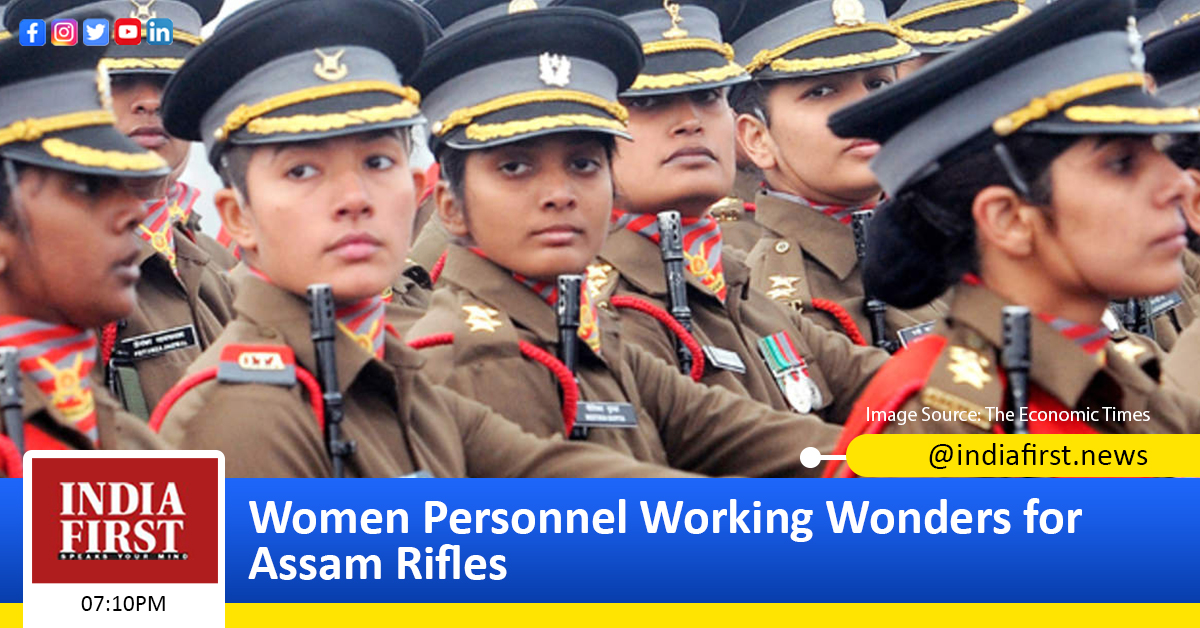 Breaking the shackles, women are joining the paramilitary and armed forces in huge numbers and are participating in counter-terrorism and counter-infiltration operations along the border with Pakistan and Myanmar.

Around 200 women have joined as ‘rifle women’ in Assam Rifles, a paramilitary establishment officered by the Indian Army, responsible for guarding the border with Myanmar and carrying counter-insurgency operations in the north east region. The force is celebrating its 136th raising day.

Their presence has smoothened the functioning of the security forces in the sensitive locations as they have effectively dealt with the local women population.

The force was facing huge difficulty in the search of vehicles carrying women passengers at the border areas. Now, this has been effectively being dealt by the Rifle Women. They look out for drugs, narcotics, arms and ammunition.

Rifle Woman Jagriti, currently deployed in with 3 Assam Rifles in Mizoram, carries out patrolling along the Indo-Myanmar border where drugs and arms are being pushed in by insurgent groups supported by China.

Jagriti is from Aravalli district of Gujarat and has completed four years of service. “Earlier, I was deployed in Nagaland and Jammu and Kashmir and took part in counter-insurgency operations,” Jagriti revealed.

She said that throughout her childhood, she saw her uncle in uniform. “From then on I aspired to join the force. Now after joining, I feel proud to be part of the force,” said Jagriti, while carrying out a patrol in inhospitable terrain near the Myanmar border.

She feels elated as she is treated on a par with rifle men in the force.

Her battalion has 16 women doing all duties assigned to them. She is part of border guarding at a time when there is an influx of people from Myanmar crossing the borders after a coup in the country.

Another Rifle woman Lucy Ramtharmawi, who was selected in 2017, said she goes for patrolling at forward locations as an when required. Hailing from Manipur’s Churachandpur district, she was inspired to wear the uniform seeing other people living near her native place joining the Indian Armed Forces. “I am also deployed at mobile vehicle check posts and carry out checking of suspected local female members involved in contraband smuggling.”

Similarly, Sophie Vanlalhmangaihi from Mizoram is deployed at forward locations in Jammu and Kashmir these days.