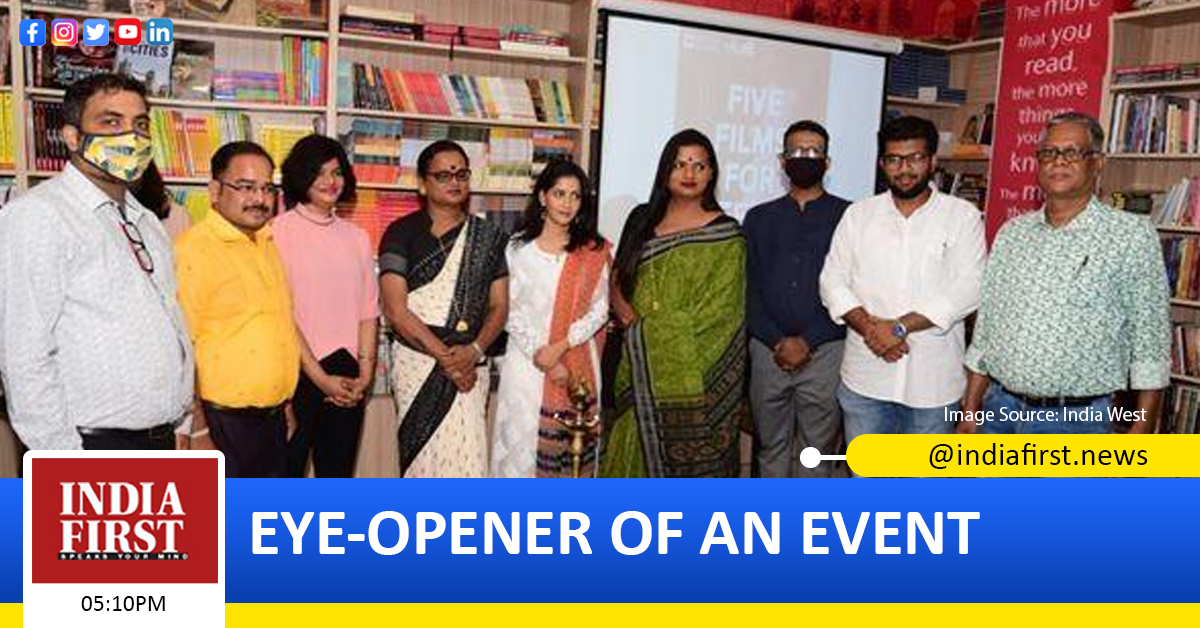 Dignitaries such as Anu Choudhury (actress of Odia film industry and social activist), Meera Parida (Odisha’s first transgender politician, Member of the National Council for Transgender Persons and President of All Odisha Kinnar Mahasangha), Sadhana Mishra (First in Odisha to get passport in transgender category, social activist and TV anchor), and Sahadeva Sahoo (writer and administrator) were present at the event held on Sunday.

Mahua Banerjee (Art Manager, East India, British Council) conveyed a congratulatory message on behalf of British Council, while Debasish Samantray presided over the meeting. He started off with expressing gratitude to the dignitaries and British Council.

Sahadeva Sahoo was moderator of the session “LGBTQ: Mainstreaming The Marginalised”. He noted that on April 15, 2014, the Indian government recognised transgenders as the third gender, and sought Meera Parida’s opinion about the legal sanction.

“The movement of transgender has taken fire all over the country. Odisha has taken a step forward in terms of culture and education. We need to understand a society is stigmatised if they are not educated about a certain section of society,” said Meera Parida.

Parida continued: “I feel Shikhandi’s pratigya was the bigger pratigya, who was born a trans. Brihannala also saved the Pandavas from death. Our section has dedicated services to society. During the Mughal era, if there are five boys in a family, one was turned into transgender. During 200 years of British rule, the transgender society was unfortunately not given the respect it deserved. Our fight in freedom struggle was never registered in the Literature or History.”

“There was no equality or rights during those days. They hid their identities and stayed in Hijra packs. A lot of rules were forced on us that were relieved along with time. I voice my concern as to why our regulations were not concerned during IPC and constitution creation. Our section was looked down. If it’s mentioned every section in society is equal, then why is there such a massive social disparity. We’ve been mentioned in sustainable development, gender equality. If we’re the third gender, who’re first and second gender? Why is there inequality at such a high level?” said Meera Parida.

Sahadev added: “In 2014, the government declared third gender. In Kerala, there was a survey in 2016, 90 per cent trans tried to commit suicide, 58 per cent dropped out due to harassment. They were sexually abused. Only 10 per cent revealed their identity. We have our rule in place, then how can this be accepted by society? Rules alone are not sufficient.”

Said Anu Choudhury: “Base of every aspect has a mindset and home. A child takes birth at home. His first teacher is his mom, then the family and society. The mom’s mindset is his biggest nutrition and lesson. Nature has been teaching us all this while.”

“From a survey in 2020, when people stayed at home, people had unrest that led to increase in crime. One must reach out to parents and family. When we undergo hormonal changes, no one discusses it openly. We’re never indifferent from nature. God made us, who are we to differentiate. It’s about how better we council them, how better we educate their parents,” Choudhury further said.

“Suicide only occurs when there is mental harassment, apart from physical harassment. We need to hold hands together as a society and empower the suppressed. Film is a reflection of society. There will be work on this in future as well. If I get an opportunity like this, let’s join our hands for the change,” added Choudhury.

Sahadev noted: “From my interviews, students get harassed by teachers in class. The LGBT section has no organisation. They fight as individuals. What do we do to empower them and provide them shelter?”

Sadhana Mishra said: “This is the first platform to discuss in Odisha and we’re proud to be a part of this program. Sexuality and sexual orientation is not fixed between five to 10. At age five, boys play female games, so they don’t recognise sexuality. People recognise me as ‘maichiya’ (effeminate) in Odisha or as a ‘chakka’ (eunuch). I’ve been hearing that all my life. This is the time we all need support. All families should be oriented and sensitised about it. In our curriculum, there’s no counselling and no space for the transgender section. When children come to school, they are harassed due to lack of orientation.”

“There was no education about good touch or bad touch. But it has happened to me, I’ve been harassed. During adolescence, sexual orientation comes to children. If the kid is a transgender, he’s unaware about it due to lack of counselling. As a transgender I am a male physiologically, but I’m a female in terms of psychology and mindset,” Mishra said.

“In religious literature, there is a safe culture called Hijra culture. Concepts are coined in terms of bisexual, heterosexual. In Odisha, it is a big challenge. When we started SAKHA, the LGBT rights association in Odisha, people were hesitant to talk about the issues. This is a 7 color association. We came to road in 2004 and were declared as transgender. We had a documentary in Subha Kahani on OTV. There was a lot of controversy. In Odisha, there should not be stigma.”

“There is no difference in acceptance. It’s always dependent on mindset of people. It’s only possible when every individual’s mindset changes. That’s how LGBT community will be recognised. I am a human being. Let’s spread love and respect to each other. The most interesting thought is, me and Meera were really excited to go to White House. But it was a massive challenge to get there, in terms of Visas and security check by men in airports. Trans people extend their services to every sector in society. A kid called me at Baramunda bus stand. Mom and dad hit her really bad and harassed her really bad. She was 18 years old. I counselled the family members. It’s all about positive thoughts and changes in mind,” Mishra said.

Anu Choudhury added: “We discuss this a lot but we forget when we move out. An individual realised it at a certain age. The parents should be responsible to have this conversation. They shouldn’t take it as a curse from early lives. When a kid goes through changes, he should reach out to parents. Let’s build a community called humanity where we have a heart and in that we have a soul. If a torturous event happens, there’s no issue in communicating it openly. If we feel the parents are segregating the kid, we’ll council the parents and the kid. We have a heart within and use it well to spread love. There’s no shame.

The actress noted how the “finest make-up up artists come from this section”.

On parenting, Sahadeva Sahoo said: “How can families be educated (through films and literature)? Same sex marriage is yet to be legal even in 377. Is that the next step?”

The response came from Meera Parida: “Transgender and Hijra are completely different. Trans have a culture like staying together, ‘Guru-Chela’ (teacher-follower), giving blessings at events. For the LGB identity and shelter, the government is about to start Garima Gruha for those LGB who feel left out, and give them education and medical facilities.”

“In IPC 377, sexual minority is always pointed out. Supreme Court decriminalised IPC 376 violation, and segregates us as the third sex. What kind of system is this? I can’t go and admit I married in a temple if we live together. I can have a partner of my choice and find sexual relationship, but cannot get married.”

“The government says this is a country of culture and ‘parampara’ (tradition), we cannot allow same sex marriage. We are iceberg community as we don’t disclose our identity due to oppression. There is a lot of debate going on about this. The government has to take mindset of people into consideration. Of course, the government cannot force the law.”

“We’re humans, we have likes and dislikes. If I take sexual pleasure in privacy, it’s my issue. Our country is the only country that ensures equality. There is Transgender Protection Act, 2019. Times are changing, mindset should change as well.”

“Society’s condition is such that parents are ready to accept, but the neighbours do not allow it. Waiting for counselling facilities isn’t really worth. We need protected rights. There should be more acts and laws that have penalties if violated. Identify for which problem are we born,” Meera Parida continued.

“Barring a few, films and TV shows are primarily responsible for putting our section in bad light. You don’t have any right to make money by tarnishing our image in society (including TKSS). We’re humans. Anu (Choudhury) is always associated with us. Many other Odia film superstars, too. ‘Andhara Ra Alingan’ book and movie is about to come.”

“No matter how much awareness programs run, the root reason is us. We need to accept. Be it a girl or boy, education empowers individual to take personal decisions. I hope in the next session, we’ll discuss the change in society.”

“There’s a positive and negative in every aspect. To learn as an actor about a character, I will approach you to learn about the dynamics. My intention would never be to demean a section of society,” said Anu Choudhury.

Sadhana Mishra made the suggestion for an Odia film to be made on this social stigma.

Sahadev Sahoo addressed Meera Parida and Sadhana Mishra, saying: “You should write your own story. Write your autobiography. If there’s a sexual assault, people should take it seriously. School and college students need to have workshops for awareness and social acceptance.”

The session followed by Q&A and then film screening. A highlighted question was asked by Soumitri Hota. He said he has already revealed to his parents that he’s gay, but his parents hesitate to talk about it despite accepting him. Anu Choudhury and Meera Parida supported and assured him about discussing the issue with his parents if he couldn’t convince them.

The screening of the five films was held for one hour, followed by vote of thanks by Debashish Samantaray.