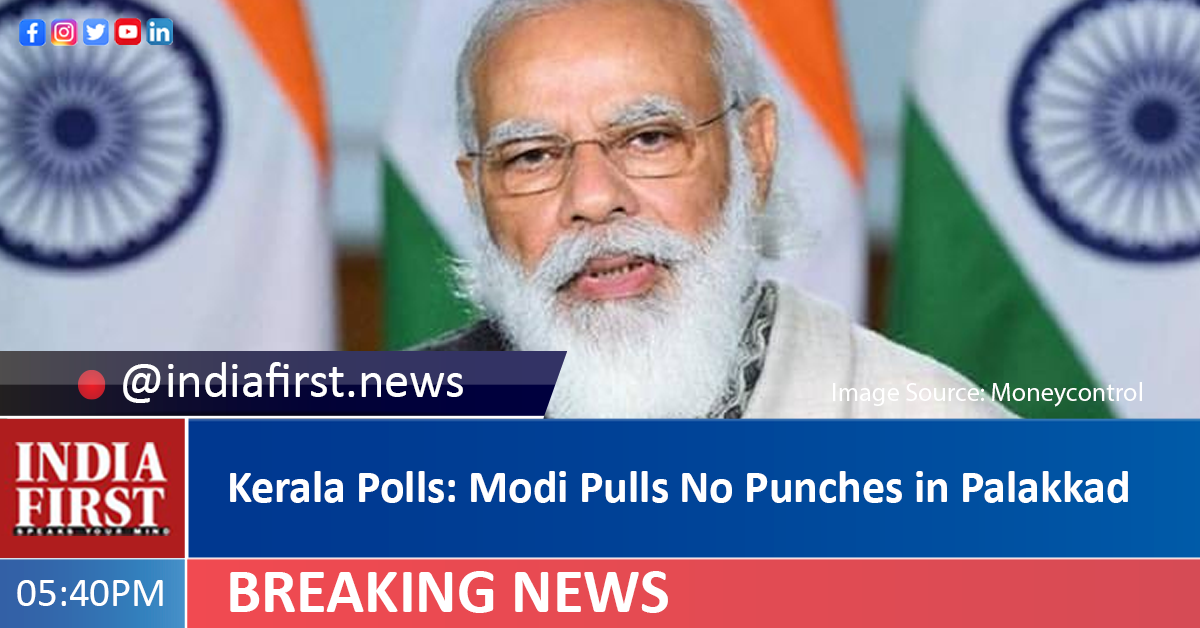 Modi slammed both the ruling Left and the Congress-led UDF, as he urged the voters to choose the best option – Bharatiya Janata Party’s E. Sreedharan, the Metroman, who is the face of development.

“It’s match fixing in Kerala as for a five-year term one front loots and then comes the other front, which loots for the next five years. Both these fronts mislead the people. At the Centre, the Left supports the UPA and during election time they accuse each other and when they come to power here, they don’t act,” said Modi.

Dressed in typical Kerala style jubba, Modi arrived at Palakkad around 10.45 a.m. and drove straight to the hugely crowded venue where he was greeted with an enthusiastic response by his party workers.

He said the people of Palakkad have a close tie with the BJP and he has come with a refreshingly different outlook from the current situation prevailing in the state.

“The situation in the state is that the UDF has not even spared the rays of sun (meaning the Solar scam), while the Left is like Judas, who betrayed Christ for a few pieces of silver as the Left has betrayed Kerala for a few pieces of gold (referring to the Gold smuggling scam),” added Modi.

He said the root-cause for all this is because the Kerala population gets played into this two front’s hands. “They play vote bank politics to fill up their pockets.

“The BJP is different. By now across the country the youths and the professionals from all walks of life have joined the BJP,” said Modi.

Present on the stage was 88-year-old Sreedharan, who is the BJP candidate from the Palakkad assembly constituency and Modi said “Metroman is one person who has achieved a lot in his life”.

“He is a proud son of Kerala and if he wanted power he could have got it 20 years back and he knew when he joined the BJP he would come under attack,” added Modi.

Turning against the rival fronts in Kerala, Modi blamed them for creating the highest number of road blocks which has slowed down the development of Kerala.

“It’s here that the BJP should be chosen as we have adopted the policy of FAST development.

“F — fisheries and fertilizers; A — Agriculture and Ayurveda; S — Skill development and Social justice and T — Tourism and Technology.

“We assure you all that we will go along these policies and Kerala will see fast development,” said Modi.

Dwelling on the issue of the Sabarimala temple, Modi slammed both the Left and the UDF.

“The Kerala culture and traditions have all being shamed by the Left. But I am very proud that our party stood by it and we want to tell the government that we won’t be scared.

“Lot of people were attacked when they protested and our own state president K.Surendran was arrested for speaking about culture and traditions. When this happened, the Congress-led UDF was silent,” said Modi.

He also slammed the politics of violence unleashed by the Left.

“The Left has been in power many times and many of their leaders behave like goons. When in power they unleash violence against political rivals, which is not good for democracy. So many BJP workers have lost their lives.

“If you have a BJP government in Kerala, it will stop all such things. The youth of Kerala wants change and we the BJP assure change so when you go to vote, vote for us,” said Modi.