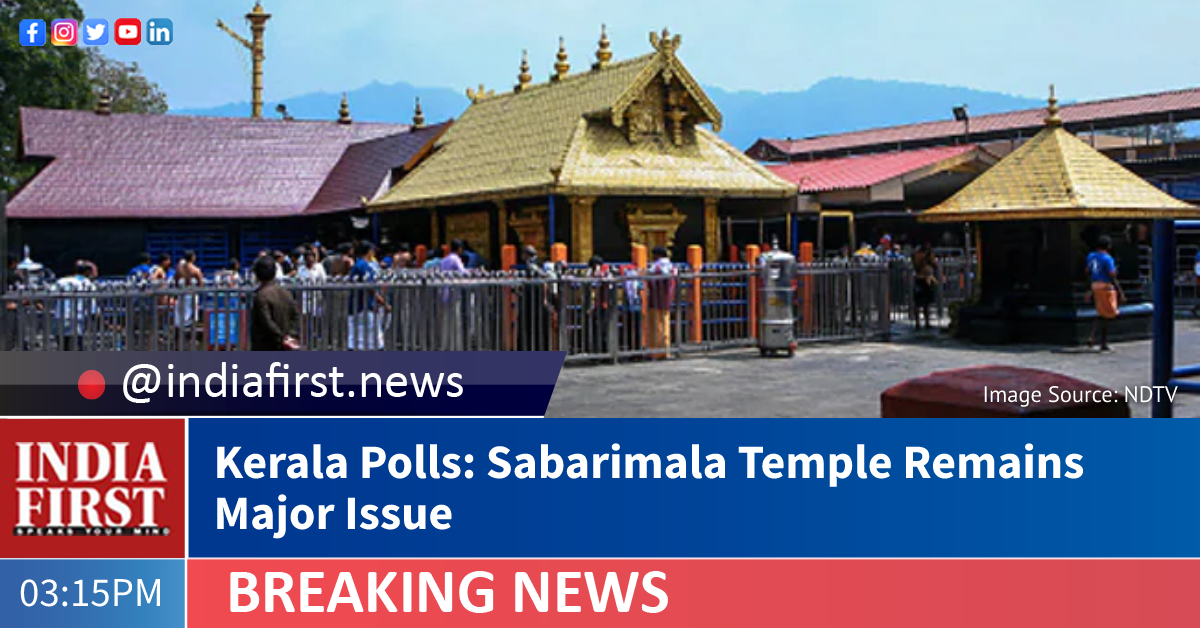 The controversy over the breaking of the Sabarimala temple’s culture and tradition continues to rage and is even now the most discussed election issue in Kerala as seen from the statements of various top political leaders, who came to cast their votes today.

Soon after casting his vote at Changnacherry in Kottayam district, Nair said what he could sense is that the people in the state want a change in governance and want an outfit which will uphold social justice and secular credentials.

“The Sabarimala temple issue continues to rage as believers are angry,” said Nair.

It was in 2018 that the apex court ruled that the temple should be open to all women irrespective of the age group as until then the temple tradition was that no women in the age group 10 to 50 be allowed entry.

Following the verdict, the Vijayan-led government floated a renaissance movement, much to the anguish of the believers of Lord Ayyappa, the deity at the Sabarimala temple, and even went to the extent of providing security to two activist women to pray at the temple by providing police security.

The temple town then became a battle ground after believers in large members resisted attempts by the police to take women in the hitherto banned age group.

This temple issue came as a setback for Vijayan in the 2019 Lok Sabha polls when he won only one of the 20 Lok Sabha seats in Kerala.

Today, after casting his vote at Kannur, Vijayan when asked about Nair’s Sabarimala temple issue said: “It’s not just Ayyappan alone, all Gods are supporting the Left.”

And then came statements from the Congress leaders who condemned this sudden U-turn by Vijayan.

“Vijayan will get the wrath of Ayyappan as he destroyed the sanctity of the famed Sabarimala temple,” said Chennithala.

Two-time former Congress Chief Minister Oommen Chandy said Vijayan’s statement will be taken with a pinch of salt by the people as it has no sum or substance.

“The first thing he did was to file a fresh affidavit and it was done after withdrawing our affidavit, and it was clear that he was against the existing traditions of the temple. When the apex court verdict came, he said he will abide by the verdict. Soon, he led a renaissance movement and when no women came to visit the temple, police forcefully took two women to the temple and the culture and traditions were broken. And on election day Vijayan has made a huge U-turn and this would be dismissed by every devotee as nothing but a bluff,” said Chandy and added the Congress-led UDF will win a resounding victory.

Union Minister of State for External Affairs V.Muraleedharan laughed at the statement of Vijayan and said it was high time that the CPI-M be wound up as their ideology has been thrown out of the window.