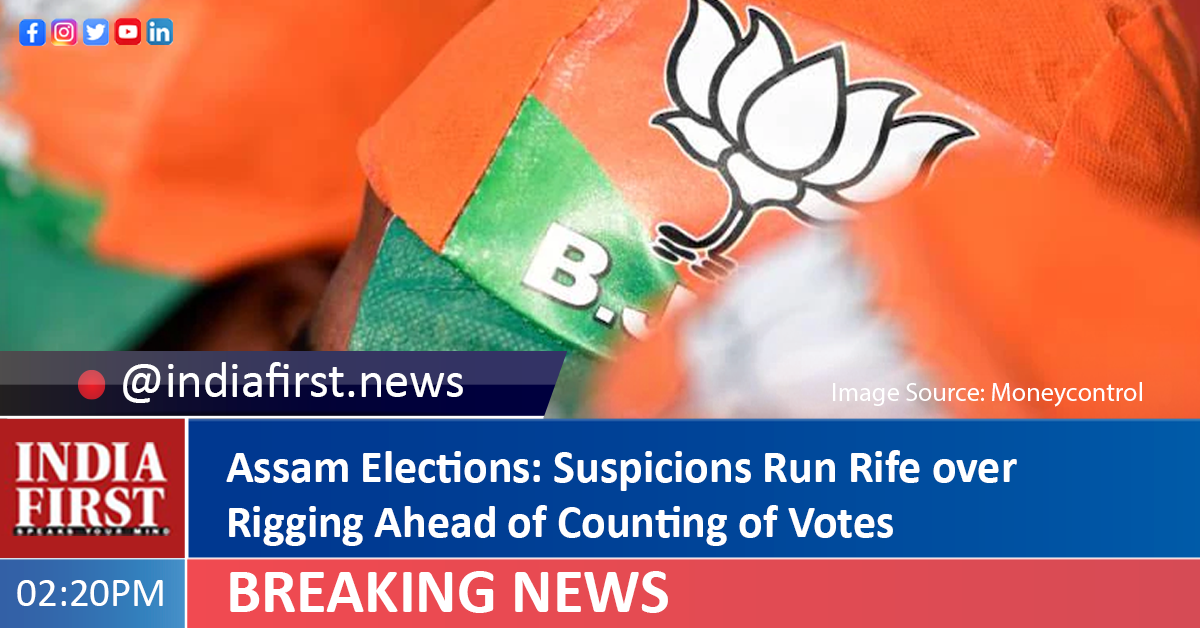 With the completion of the three-phase Assembly elections in Assam, various quarters, including the principal opposition party Congress, have raised questions and doubts over the poll management and the prevailing law and order situation in the BJP-ruled state.

The Congress has alleged that the election authorities in Assam have been working under pressure from the ruling Bharatiya Janata Party.

During the three-phase elections in Assam on March 27, April 1 and April 6, several incidents, especially during the second phase, were reported from southern Assam.

The election authorities and the district administrations had to suspend many polling staff and security personnel for their lapses, besides instituting magisterial probe into these incidents.

However, the police, civil and election officials have refused to make any comment on the incidents that took place during the elections.”Whatever incidents and developments took place, the appropriate authorities have taken suitable actions and submitted their reports to the Election Commission,” a senior election official said on condition of anonymity.

Assam Assembly Deputy Speaker and BJP candidate Aminul Haque Laskar was quizzed twice while five police personnel attached to him were suspended after they opened fire at the public during the second phase of polling on April 1. Cachar Deputy Commissioner (DC) Keerthi Jalli has ordered a magisterial inquiry into the incident. District Development Commissioner B.C. Das has been asked to conduct the probe and submit a report in this regard.

Laskar, who is contesting from the Sonai Assembly constituency as a BJP nominee, told the media that the security personnel opened fire to protect his life during a clash between the rival political parties. The opposition parties have demanded his arrest.

The Cachar DC has ordered another magisterial inquiry into the incident of a vehicle carrying unused Electronic Voting Machine (EVM) overturning on April 1. The EVM transporting vehicle was attacked by some miscreants. The DC has asked Cachar’s additional District Magistrate, Rukh Liangthang, to conduct the probe and submit a report.

The police have arrested three persons for attacking the private car in which the polling personnel were travelling along with the polled EVM after the completion of the second phase of polling on April 1.

The District Magistrate of neighbouring Karimganj has ordered a magisterial inquiry after the police arrested three persons in connection with the EVM found in a BJP candidate’s wife’s vehicle on April 1, officials said.

The Election Commission has suspended the presiding officer, three other polling officials and an armed escort official and ordered re-polling at Polling Station No 149 in Indira M.V. School under the Ratabari (SC) Assembly constituency after the EVM was found in a BJP candidate’s wife’s vehicle.

In another incident, at least six polling personnel were suspended in Assam’s Dima Hasao district after it was found that a booth with 90 valid voters registered 181 votes during the second phase of polling on April 1.

Election officials said that repolling would be held at the auxiliary polling station – 107-A Khothlir L.P. School – under the Haflong Assembly constituency..

In another development, again in southern Assam, little over 500 Home Guard personnel of Assam government, including many women, were forced to return to their homes without performing election duties in the second phase of polling on April 1.

They alleged that due to the inhuman treatment and negligence of the Cachar district authorities, they were forced to return to their homes as the authorities wanted to pay them very little amount, besides not arranging proper food, shelter, toilets and even water for them in the temporary camp (school).

Assam Congress President Ripun Bora yesterday alleged that the election authorities in Assam are been working under the pressure of the ruling BJP.

“The EC must clarify why polled EVMs and unused EVMs were transported in mysterious circumstances. The Assam Assembly Deputy Speaker’s security personnel opened fire on public while minister Pijush Hazarika threatened a journalist with dire consequences, but the EC has remained silent,” Bora, a Rajya Sabha member, told the media in Guwahati.

The Congress leader also alleged that there is no security of women in Assam.

Demanding effective supervision and monitoring of the strong rooms, where the polled EVMs are kept, Bora said that he has already written to the Election Commission to provide CCTV links from the strong rooms across Assam to all the candidates in order to maintain transparency.

Referring to several untoward incidents on the day of polling in Barkehtri, Jalukbari, East Guwahati and West Guwahati on Tuesday, the Assam Congress chief asked for proper action against the guilty.

“BJP candidate (for Gauhati East seat) and minister Siddhartha Bhattacharya was found to have misbehaved with a police officer. Legal action must be taken against him,” he stated.

The results will be declared on May 2.