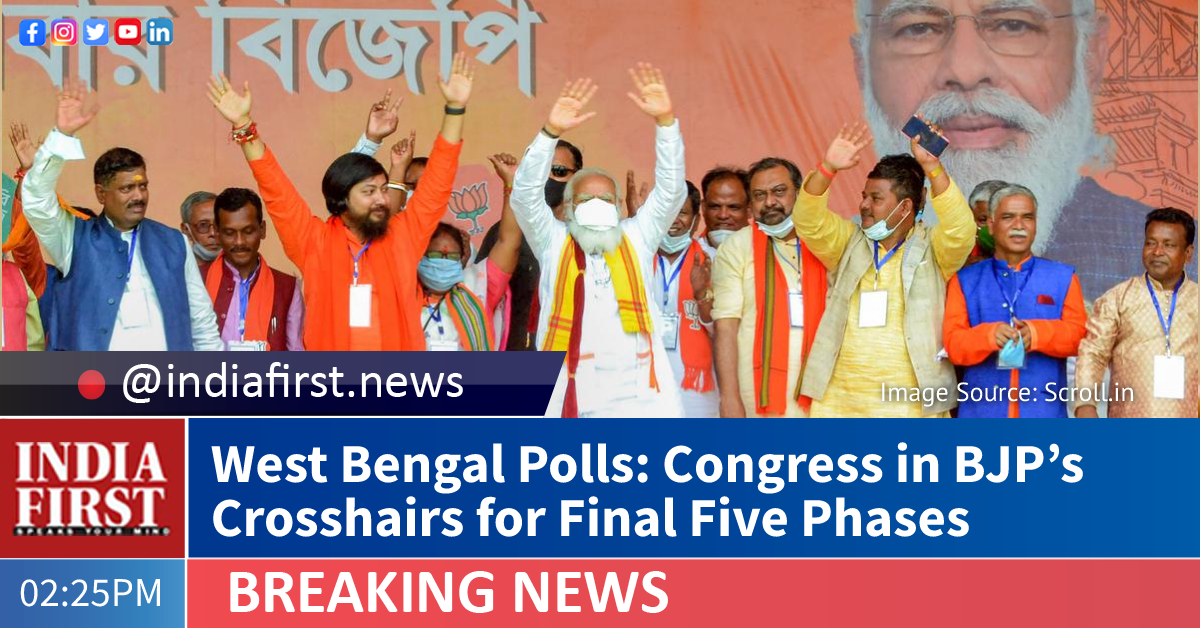 To ensure division of non-BJP votes among the ruling Trinamool Congress and the ‘Samyukta Morcha’, the saffron party will start attacking the Congress in the remaining fives phases of Assembly elections in the state.

The Congress, Left and the Indian Secular Front (ISF) of cleric Peerzada Abbas Siddiqui are part of the Samyukta Morcha. The BJP strategists believe that a triangular contest in the last five phases will benefit the party, while a direct fight with the Trinamool may go against it.

Another senior saffron party leader explained that the last five legs of Bengal Assembly polls will be crucial, and consolidation of all non-BJP votes in favour of Mamata Banerjee’s Trinamool will not do the BJP any good.

“Division of non-BJP votes among the Trinamool and the Congress or its alliance partners will brighten up our chances,” he said.

To divide the non-BJP votes among the Trinamool and the Congress-led alliance, the saffron party is all set to launch an attack on the grand old party.

“Congress has its presence in many areas where polling will be conducted in the coming phases. They also have sitting MLAs there. Shifting of Congress votes in these seats to the Trinamool in a close contest will strengthen the ruling party and we have to stop this,” the BJP leader said.

As per the strategy, the BJP will now start attacking the Congress-led Samyukta Morcha so that the voters start taking them seriously.

“Non-BJP votes going to the Samyukta Morcha will weaken the Trinamool. Also, Peerzada Abbas Siddiqui might corner the minority votes for the alliance which Mamata Banerjee is eyeing,” he said.

The BJP also believes that now senior Congress leaders Rahul Gandhi and Priyanka Gandhi Vadra may campaign in West Bengal after the completion of elections in Assam, Tamil Nadu, Kerala and Puducherry, something which they have not done till now.

“The likely presence of Gandhi siblings in West Bengal will also give us an opportunity to attack the Congress which will ultimately benefit us,” a BJP leader said.

The BJP has identified a few areas that will go to the polls in the remaining phases where the Congress has presence, such as Hooghly, Howrah, Noapara, Krishna Nagar, Raiganj, Malda, Murshidabad, Jalpaiguri and Alipurduar.

“We have to stop shifting of Congress votes to the Trinamool camp in these areas,” a Bengal BJP leader said.