New Vaccines on the Way to Save Pigs, Sheep, Even Rabbits | India First e Newspaper Skip to navigation Skip to content 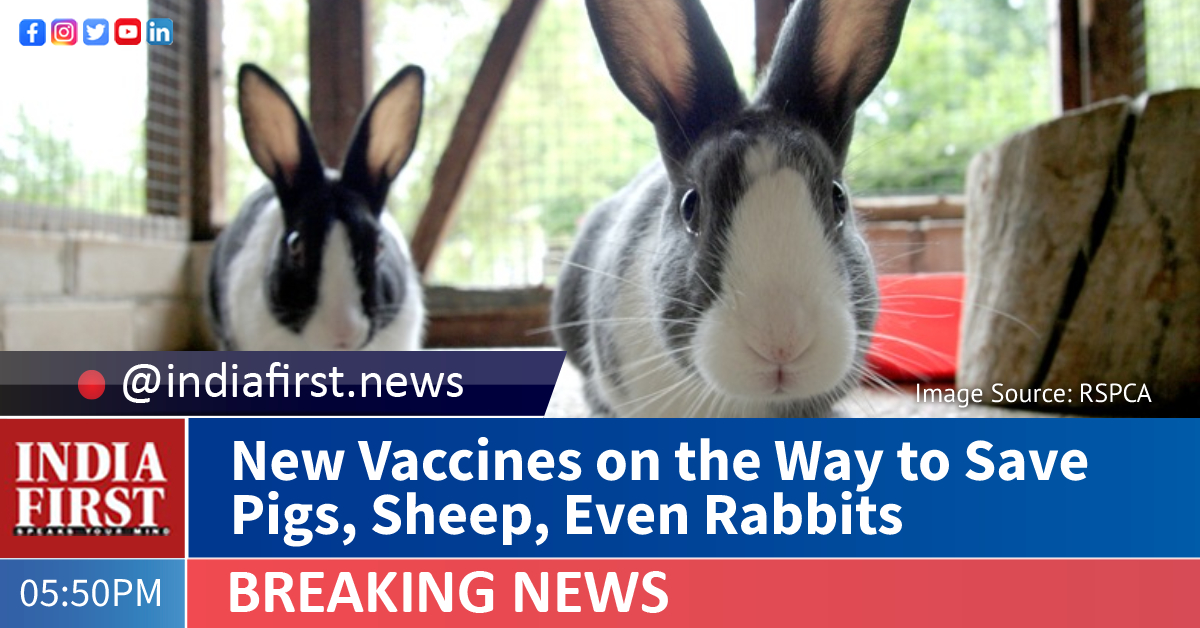 Commercial production of classical swine fever and sheep pox vaccines through the cell culture method will also save the exchequer millions of rupees while contributing to the Make in India initiative.

A vaccine has been prepared to protect pigs from classical swine fever for which rabbits would no longer be slaughtered because a vaccine developed by indigenous technology is going to hit the market very soon. Developed by cell culture method, this vaccine would also be much cheaper. An Ahmedabad-based company has recently got the rights to commercially produce classical swine fever vaccine developed by scientists in the country as well as Sheep pox vaccine.

These two vaccines have been developed by scientists from Indian Veterinary Research Institute (IVRI), Izatnagar under the Indian Council of Agricultural Research (ICAR).

Deputy Director General (Animal Sciences), ICAR, Bhupendra Nath Tripathi said that the country needs annual doses of 1.8 crore of classical swine fever vaccine, which was not enough to meet the requirements of earlier vaccines and had low immunity, but the immunity of the new vaccine is also higher and is quite cheap. He said after the commencement of commercial production, it will not be too late to prepare adequate vaccines to meet the present requirements as all the requirements of the vaccine would be met in just four flasks.

Tripathi said that earlier a dose of vaccine used to cost Rs 20 to Rs 25, the new vaccine would cost just Rs 2. Describing the classical swine fever vaccine developed by cell culture method as an achievement, he said, “The important thing is that it will no longer require sacrificing of a huge number of rabbits for preparing vaccine. Only a single dose of the new vaccine will be enough as its immunity lasts for two years.”

Currently, a lapinized CSF vaccine (Weybridge, UK) is being used in India since 1964 for controlling the disease which requires sacrificing of a huge number of rabbits.

Scientists point out that the new vaccine provides safe, powerful and 100 per cent protection and maintains immunity in the animal’s body for 24 months and 14 days since the day of vaccination.

Classical Swine Fever is a viral-borne disease in pigs characterized by high fever, haemorrhages over skin, cyanosis in the extremities of ear, limbs and abdomen and finally leading to loss of coordination of movement and paralysis of the hindquarters. The mortality rate of this disease is 100 per cent that results in huge economic losses.

Scientists point out that 50 doses of this vaccine are prepared from one rabbit which was very expensive as well as inadequate.

As much as 1.8 crore vaccines are required annually to vaccinate 90.6 lakh pigs in the country. Scientists point out that the new vaccine developed from cell culture method would easily meet the needs of the country.

Sheep pox is a contagious viral disease in sheep, with a serious socio-economic impact in terms of high morbidity (up to 100 per cent) and mortality (up to 50 per cent). The disease is characterized by fever, muco-purulent nasal discharge, papules and nodules all over the body.

Experts point out that the annual loss due to sheep pox in the country is estimated nearly Rs 125 crore and the only way to avoid this loss is the vaccination of sheep.

Therefore, IVRI has developed a live attenuated sheep vaccine using sheep indigenous isolate (SPPV Srin 38/00 strain). The vaccine has proved to be safe and effective in the test. Scientists point out that a single dose of this vaccine protects sheep for 48 months.

Both these vaccines have been commercialised through the agri-innovation of Department of Agricultural Research and Education (DARE) under the Union Ministry of Agriculture.

Experts point out that these two vaccines developed under ‘Make in India’ initiative are examples of meaningful progress towards making the country ‘self-reliant’.