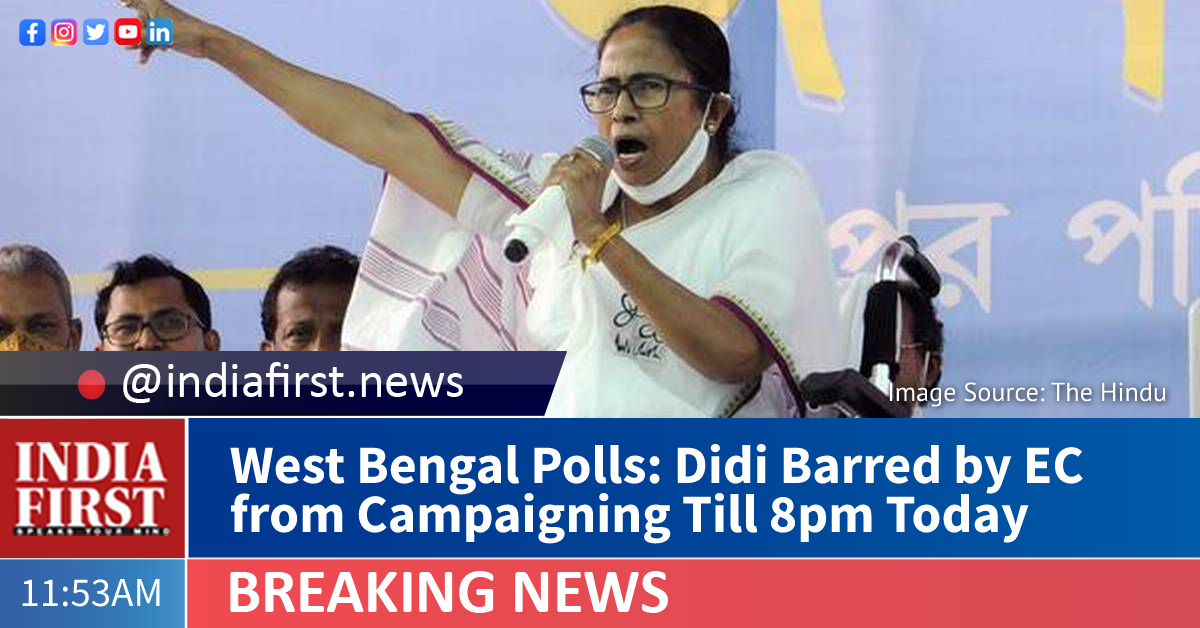 Unsatisfied with West Bengal Chief Minister Mamata Banerjee’s responses to the two notices of the Election Commission, the poll panel has barred the Trinamool Congress supremo from any kind of campaigning for 24 hours, from 8 pm on Monday to 8 pm on Tuesday.

The Commission had sent notices to Banerjee for her remarks against central forces and a statement which had alleged religious overtones.

In a five-page letter written to the Chief Minister, the Commission said: “The Commission hereby condemns such statements potent with serious law and order problem across the state(s) and sternly warns Mamata Banerjee and advises her to desist from using such statements while making public utterances during the period when Model Code of Conduct (MCC) is in force. The Commission also imposes a ban of 24 hours on Banerjee from campaigning in any manner”.

Banerjee was quick to respond and announced a dharna against this “unconstitutional decision”.

“To protest against this undemocratic and unconstitutional decision of the Election Commission, I will sit on a dharna on Tuesday at Gandhi Murti from 12 noon,” she tweeted.

On April 7 the EC had served a notice to the CM directing her to submit a written clarification explaining her open demand for votes on communal grounds for her party Trinamool Congress in the ongoing Assembly elections in the state.

“I am requesting my minority brothers and sisters with folded hands, don’t divide the minority votes after listening to the devil person who had taken money from the BJP. He passes many communal statements and initiates clashes between the Hindus and the Muslims. He is one of the apostles of the BJP, comrade. The comrades of CPM and BJP are roaming around with the money given by the BJP to divide the minority votes,” she had said.

In her reply, she wrote :”I did not seek to influence the voters to cast their vote for her on religious segmentary lines I categorically spoke on the religious harmony lines with the spirit of the MCC.”

The Commission issued a second show-cause notice for her “attempt to berate and vilify the central forces by making false, provocative and intemperate statements”.

“I know under whose instruction they beat up and how they beat up. It is your duty to save the family of the people. If any of your mothers and sisters suffer a single stroke, with a stick attack them… I am telling you. It is the right of the women. And if anyone of our mothers and sisters is denied entry in the voting compartment all of you come out and revolt,” she said.

Banerjee in her reply again defended herself and said “In my speech I had only called upon the voters to protest (democratically by gherao) if and when somebody (including CAPF) created any obstruction in their right to vote. Gherao is a democratic way of registering protest”.

The Commission said Banerjee, who happens to be the Chief Minister of the poll-bound state has violated the Model Code of Conduct as well as section 123(3) and (3A) of the Representation of the People’s Act 1951 and sections `186, 189 and 505 of Indian Penal Code and made highly insinuating and provocative remarks laden with serious potential of a breakdown of law and and hereby adversely affecting the poll process.

The fifth of the eight-phase Assembly election in Bengal is scheduled to be held on April 17. The results will be declared on May 2.