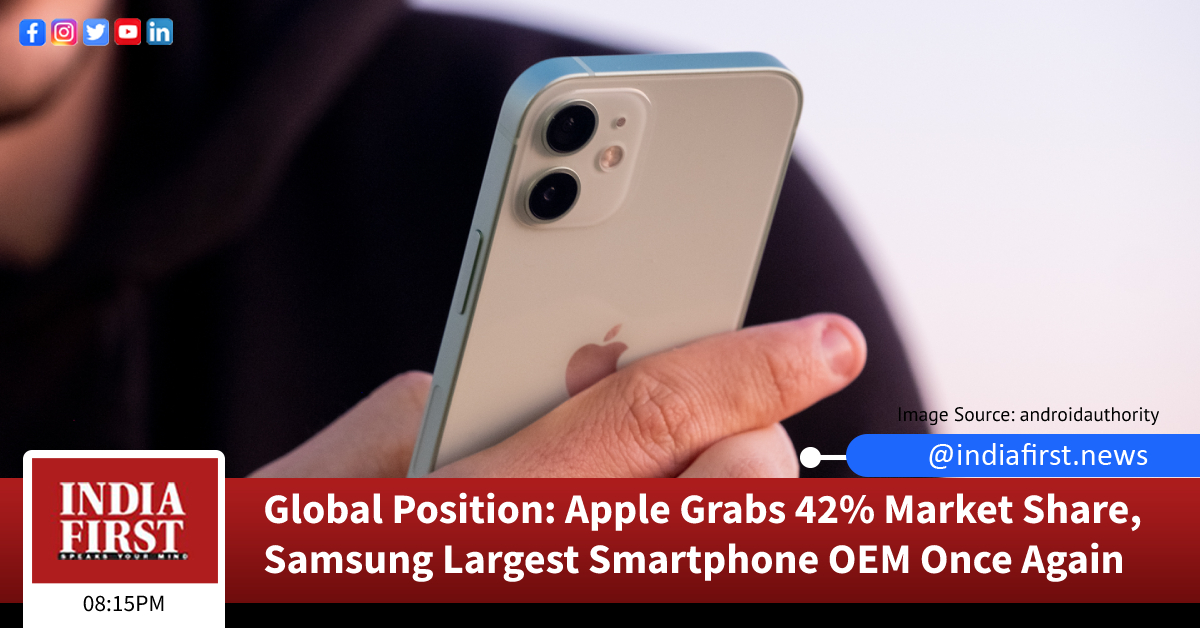 Riding on the success of its iPhone 12 series, Apple captured 42 per cent market share (by value) in the global smartphone market that posted a record US$113 billion in sales for the first time in the first quarter (January-March) this year, according to a new report.

Samsung regained its top spot as the world’s biggest original equipment manufacturer or OEM (by volume) with shipments reaching 76.8 million units in Q1 2021, according to Counterpoint Research.

“Apple captured a record first-quarter revenue share driven by the strong performance of the iPhone 12 Series and demand spill-over from the previous quarter due to delayed launch. The popularity of its higher-end variant, the Pro Max, in countries like the US and Europe also boosted Apple’s revenue growth,” said Senior Analyst, Harmeet Singh Walia.

The iPhone performance was consistently strong across the world as Apple grew strong double digits in each geographic segment and set March quarter records in most markets, according to the company.

Samsung regained the top spot with the successful launch of the Galaxy S21 series, with pent-up demand across Europe, US, Korea and other markets, according to Senior Analyst Varun Mishra.

Samsung’s push into the mid-end segment with its successful A-Series devices was another major driver.

In the meantime, semiconductor shortages have affected the overall supply landscape and increased the lead times of chipset solutions for major vendors.

“However, we see these vendors looking to diversify their foundry strategy to alleviate chipset shortages in the second half of this year,” said Tarun Pathak, Research Director at Counterpoint Research.

“These shortages might push specific component prices up by 5-10 per cent and OEMs will look to absorb these cost increases by being creative with the Bill of Materials (BoM) and in some cases might even pass the added costs to the consumers,” he added.

OPPO had a record quarter both in terms of revenue and shipments. OPPO shipped 38 million units globally, growing at a staggering 70 per cent (YoY).