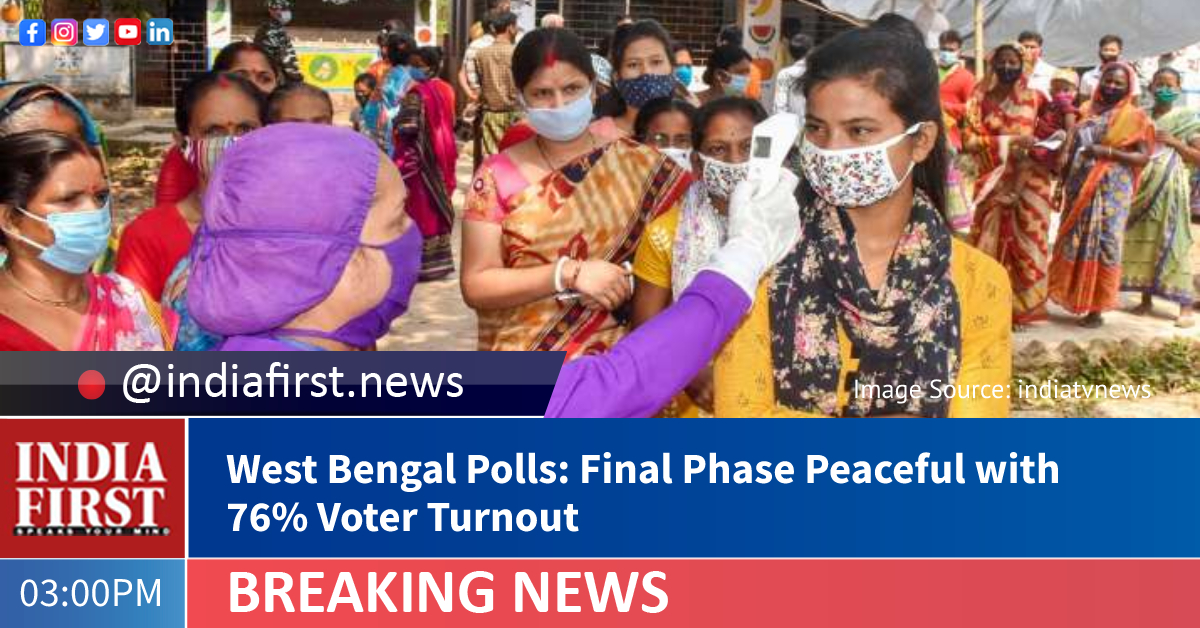 Despite some sporadic incidents, the eighth and final phase of Assembly elections in West Bengal concluded peacefully yesterday with a voter turnout of 76.07 per cent.

According to the data released by the Election Commission, Birbhum district recorded the maximum voter turnout of 81.87 per cent till 5 pm, followed by Malda (80.06 per cent), Murshidabad (78.07 per cent) and North Kolkata (57.43 per cent).

North Kolkata, where 7 Assembly constituencies went to the polls, recorded an overall polling percentage of 57.43 per cent. Among the individual constituencies in the city, Jorasanko witnessed the lowest polling of 48.45 per cent, while Chowrangee recorded a turnout of 51.98 per cent.

Entally recorded the highest polling in the city at 65.79 per cent, while both Beliagahta and Maniktala recorded a turnout of 60 per cent.

The sporadic incidents that took place during polling yesterday started with the explosion of two crude bombs near the Mahajati Sadan under the Jorasanko Assembly constituency in the early morning before the beginning of polls.

The police have collected CCTV footage from the spot, but no arrests have been made as yet. No one was injured in the incident.

The second incident was reported from 239 Rabindra Sarani under the Posta police station at 9 am when two crude bombs exploded there. The police have arrested six persons in connection with the case. However, the EC later said that they were only heavy crackers.

Clashes and fisticuffs broke out on more than one occasion between rival political groups.

In Kolkata’s Beliaghata area, clashes broke out between two groups of people on more than one occasion following which the police resorted to mild lathi-charge to disperse the crowd.

In Maniktala constituency, BJP candidate Kalyan Choubey was allegedly gheraoed by a group of people during his visit to the polling booths.

ADG (Law & Order), Jagmohan, said that the police made 835 preventive arrests yesterday which included 316 from the Kolkata Police area. Four persons were arrested on charges of violating Section 144, while 20 were held under specific cases.

“We have recovered 78 crude bombs, seized 5 illegal weapons and 21 round ammunition,” Jagmohan said.

The EC received 1179 complaints through various platforms on Thursday. There was also drone surveillance at some polling booths in Kolkata for monitoring the elections.