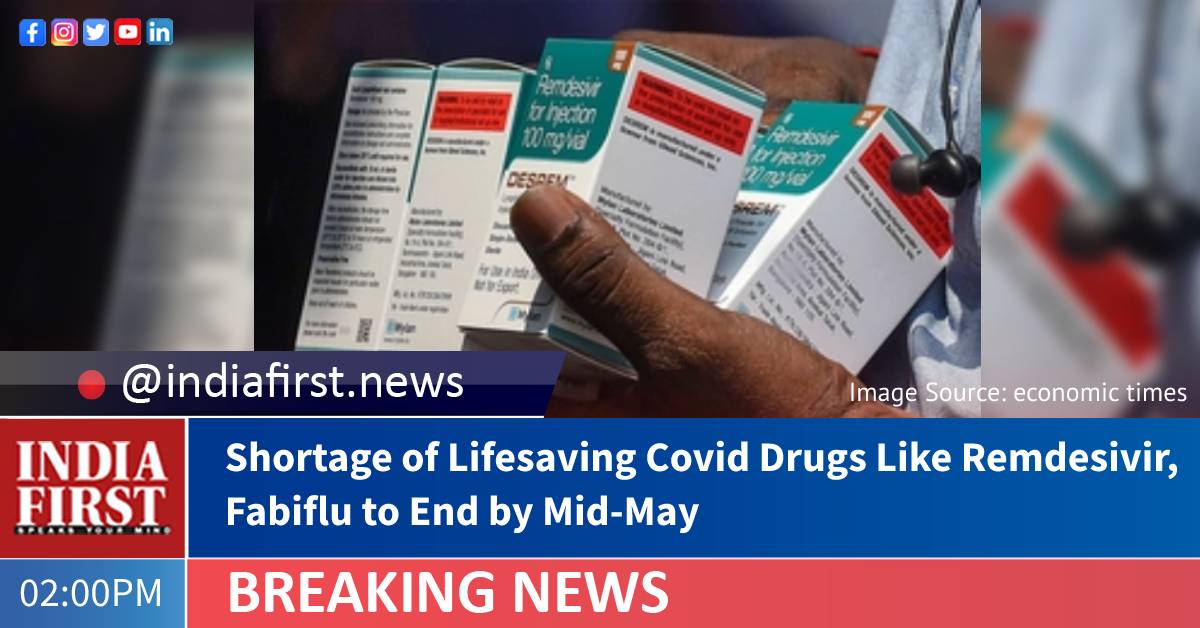 With dire shortages of Covid-related medicines seeing price spikes on the black market, the country’s apex chemist body has assured that a sizable increase in supply of important life-saving drugs from manufacturing companies would ‘end the crisis’ by next fortnight in India.

“An unprecedented surge in demand of some crucial medicines, used in treating Covid patients, has created a mess. Now companies like Cipla or Cadila, and others have increased production of vials manifolds. We promise supplies will be sufficient,” said Rajiv Singhal, General Secretary of All India Organisation of Chemists and Druggists (AIOCD), representing over 9.50 lakh chemists across the country.

Explaining the reason behind the shortage and delay in supply of Remdesivir, a lifesaving drug for critically-ill Covid patients, J.S. Shinde, President, AIOCD said that for production of a single batch of this drug, it takes around 15-16 days.

“Remdesivir cannot be produced immediately. It involves a cycle of 15 days, plus 3 to 4 days in packaging and roll out. But now several manufacturers (around 7 to 8) have got licence and have ramped up production,” said J.S. Shinde.

“Presently the distribution of Remdesivir is from concerned manufacturers to its distributors. The stock goes straight to hospitals from the distributors under supervision of the state government. In this chain of supply, the chemists are not involved, so they can’t be blamed for hoarding,” he added.

Elaborating on a large-scale requirement of lifesaving drugs for critical Covid patients, Rajiv Singhal said that taking note of daily cases of around 3.75 lakh in India, at least 70,000 patients would need a Remdesivir injection. “As each patient requires 6 vials, the country would need over 4 lakh Remdesivir injections every day. We hope as most manufacturers have ramped up their production, the crisis of short supply of Remdesivir would be over,” the General Secretary of AIOCD added. According to him, other medicines like Fabiflu and Tocilizumab were also in shortage due to sudden surge in demand. In many cases stock is not reaching chemists. Besides, there were problems in procuring raw material for manufacturing Fabiflu which comes from abroad.

On the shortage of Betadine gargle, recommended for prevention of Covid-19 by many doctors, Rajiv Singhal said that due to a surge in demand of Betadine, its manufacturing company could not meet the present requirement of the market. “Let me tell you, people who need one bottle of Betadine, now buy 4 bottles. Everyone who can afford, wants to store such drugs. Actually, this type of mindset of storing crucial medicines at home, is the reason behind the present shortage of certain medicine since the past one month. To be precise, after the second wave of Covid has affected us, people have started storing medicines, even vitamin C tablets,” said Mr Singhal, a veteran in medicine trade for the past few decades.

Both the key functionaries of AIOCD, J.S. Shinde and Rajiv Singhal, denied involvement of any chemists in selling lifesaving drugs like Remdesivir on the black market. “We have one of the biggest networks of chemists which goes into lakhs. But you cannot name one chemist involved in selling this vial in black market. We have clarified earlier, that on government’s order this drug is now distributed directly to hospitals. In fact, ward boys, staff of a few hospitals have been caught red-handed selling such drugs in black market. By the way, clear instructions have been given to our members, that Organisation will not defend any chemist found hoarding any drugs,” Rajiv Singhal, General Secretary AIOCD said.