Half of Maharashtra, Except Mumbai and Pune, Opening Up from June 7 | India First e Newspaper Skip to navigation Skip to content 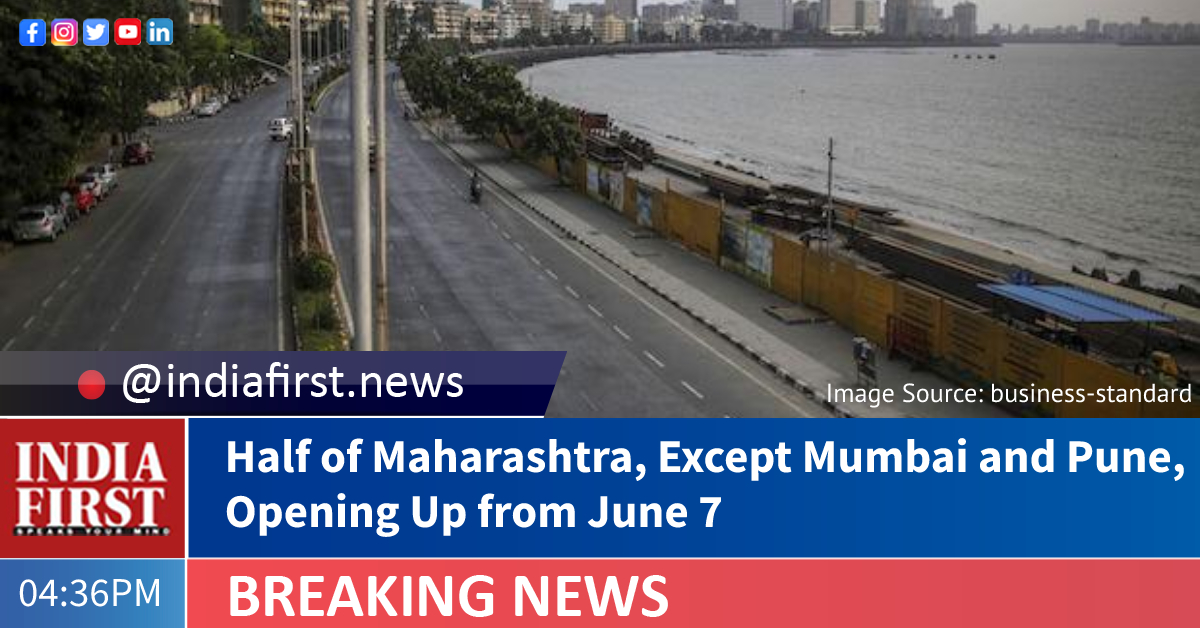 After nearly two months of strict lockdown-type restrictions, the Maharashtra government has decided to cautiously initiate a five-phased Unlock 2.0 from June 7, starting with 18 of the state’s 36 districts, officials said in Mumbai today.

The move comes as Maharashtra’s daily death figures shot up to a new record of 1,377 and the toll zoomed to 98,771 yesterday.

The Unlock decision follows detailed deliberations of over a week by state Disaster Management Unit with all other concerned departments and stakeholders, as per a detailed notification issued by the CMO early today.

The state has been divided into 48 units as per districts and municipal corporations, and five levels, depending on the positivity rate and occupancy of oxygenated beds.

Both, Mumbai and Pune, among the worst-affected do not figure in the list yet.

Suburban local trains will not be thrown open for the general public in the Mumbai Metropolitan Region of Mumbai, Thane, Palghar and Raigad.

Districts with a case positivity rate of 5 per cent or less and occupancy of hospital beds with oxygen is less than 25 per cent will come under Level 1.

These districts shall be completely unlocked with all activities continuing normally including transport, shops, restaurants, malls, theatres, cultural events, sports, industries, government and private offices, construction activities, weddings and funerals, as in the past.

Level 2 would include 5 per cent positivity rate and 25-40 hospital oxygen beds occupancy where CrPC Sec 144 will continue to be enforced, those with positivity rate of 5-10 per cent and oxygen bed occupancy less than 40-60 per cent shall be in Level 3 with the guidelines to “minimize movement post-5 p.m. on weekdays and weekends”.

District Collectors, and Municipal Commissioners of various civic bodies shall issue separate notifications on which areas are classified under which categories in their jurisdictions.

As per indications, given the current number of cases and fatalities, the country’s commercial capital is unlikely to open up fully as it falls in Level 2.