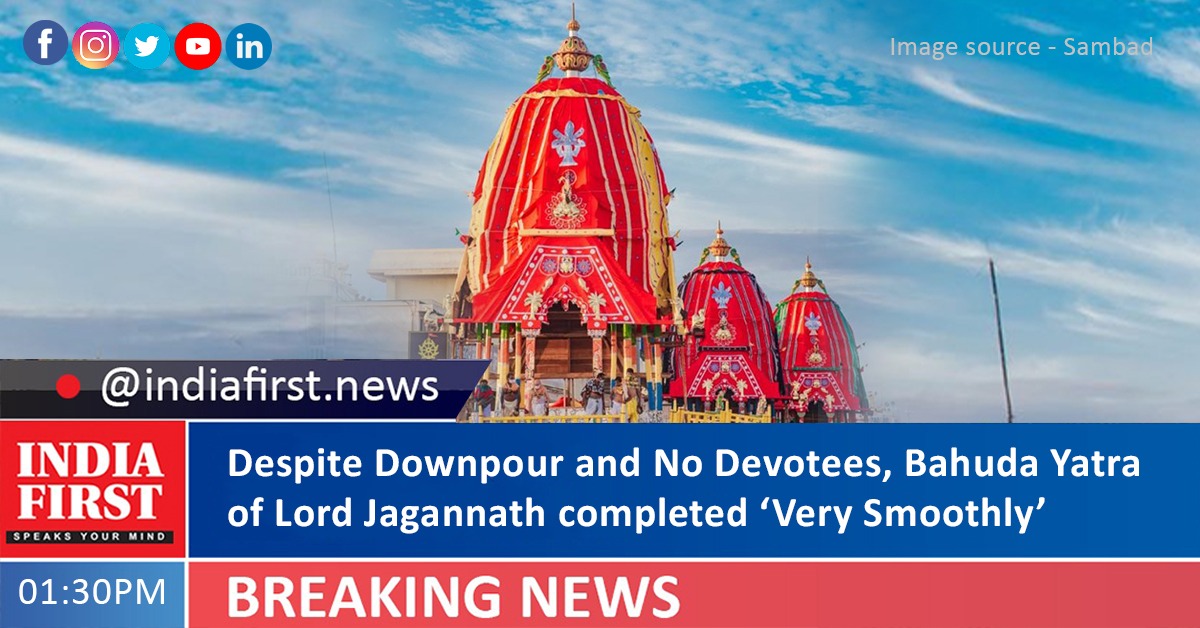 The Bahuda Yatra (return journey) of Lord Jagannath and his divine siblings, Lord Balabhadra and Devi Subhadra, to Srimandir in Puri town of Odisha was completed yesterday without the participation of devotees.

Even though the pilgrim city received heavy downpour in the afternoon, pulling of the chariots continued and all the three holy chariots of deities reached in front of Shree Jagannath Temple in Puri by evening.

After completing their nine-day sojourn to Gundicha temple, their Janma bedi (birthplace), the deities on their respective chariots reached near the Singhadwara, officials said.

“With the cooperation of all including servitors, the Bahuda Yatra has been completed very smoothly. I want to thank the servitors and the people of Puri town, who obeyed all instructions of administration,” said Puri collector Samarth Verma.

Following the morning rituals, the trinity brought out of the Gundicha temple in procession amid loud chants of “Jai Jagannath, Hari Bola” and noises of conches and ‘ghantas’ by thousands of ‘Sevayats’.

Lord Sudarsan was the first to be brought out of the temple followed by Lord Balabhadra, Devi Subhadra and finally Lord Jagannath.

Following Chhera Panhara by Gajapati Maharaj of Puri Dibyasingh Deb, pulling of the three gigantic chariots was started by the servitors around 12.20 p.m. On the way, the trinity halted at the Mausima temple where ‘poda pitha’ was offered to them.

Before reaching the Srimandir, Lord Jagannath’s chariot was also halted in front of the palace of Gajapati Maharaja, where a ritual namely ‘Lakshmi-Narayana Bheta’ was performed.

The festival was organised amid tight security in adherence to Covid norms. Curfew has been imposed on the Grand Road since July 19 night while CCTVs and drone cameras have been installed to keep a close eye on the event.