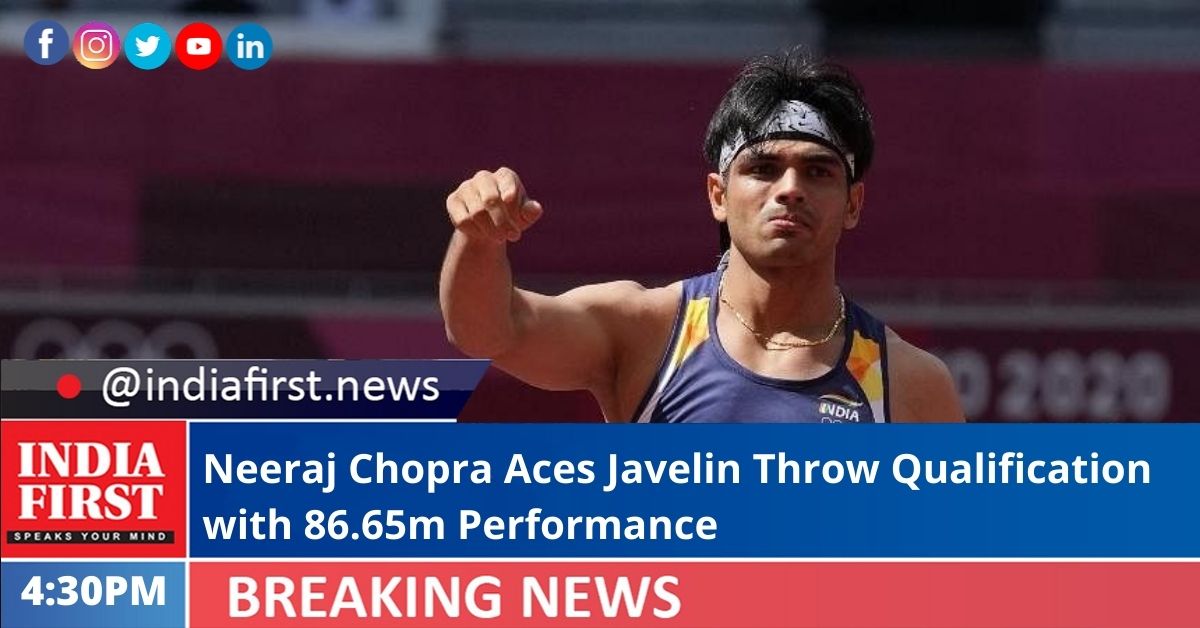 Star Indian javelin thrower Neeraj Chopra raised India’s hopes of a track and field medal when he qualified for the final at the Tokyo Olympic Games today, sealing a top place from his group, and finishing ahead of Germany’s Johannes Vetter, who is the favourite for gold at the quadrennial showpiece.

At the Olympic Stadium, the 23-year-old Chopra, the junior world champion, cleared the automatic qualifying mark of 83.50 metres with his first attempt of 86.65 metres in Group A to emerge a strong contender for a medal in the final to be held on August 7. Vetter qualified second from Group A with a throw of 85.64 metres.

Pakistan’s Arshad Nadeem, who shared the podium with Chopra at the 2018 Asian Games in Jakarta, was overall third with his best throw of 85.16 metres after he topped Group B.

All eyes will be on Chopra in Saturday’s final as he is on a roll this season and is the owner of the national record – 88.07m – which he achieved at the Indian Grand Prix in March.

Germany’s Vetter – the 28-year-old who hurled the spear to a distance of 97.76 metres in an event in Poland last September and threatened Czech Republic’s Jan Zelezny’s world record of 98.48 metres (1996) – was below-par today, managing a best of 85.64 and taking all three attempts before he could make the grade. In contrast, Chopra made only a single attempt.

In javelin throw, an athlete can make the final by either attaining the qualifying standard or by finishing among the top-12 competitors in the event.

India’s other javelin thrower Shivpal Singh came up with dismal show and attained his best of 76.40 in his first attempt to finish 12th in Group B and failed to qualify. His other two attempts were 74.80 and 74.81 metres respectively. Shivpal was placed 27th overall among 31 athletes in fray.

Following the conclusion of the qualification round, where 12 throwers qualified – seven from Group A and five from Group B – Chopra’s performance stood out, as, despite missing almost the entire 2020 due to injuries, he has come back strongly to be in contention for a medal on August 7.

Chinese Taipei’s Chao-Tsun Cheng, Keshorn Walcott of Trinidad and Tobago and world champion Julius Yego of Kenya, meanwhile, failed to make the cut for the final.

Chopra began his season with a new national record of 88.07 metres at the Indian Grand Prix in March and followed it up with another commendable 87.80m throw at the Federation Cup.

He then headed to Europe to prepare for Tokyo 2020. There, Chopra threw 83.18m at a Lisbon meet for gold, managed another gold-winning effort of 80.96m in Sweden and threw an 86.79m at the Kuortane Games in Finland for bronze. All three events were held in June.