History on the Line as Djokovic Sets up Medvedev Clash for US Open Title, Calendar Grand Slam and Record 21 Majors | India First e Newspaper Skip to navigation Skip to content 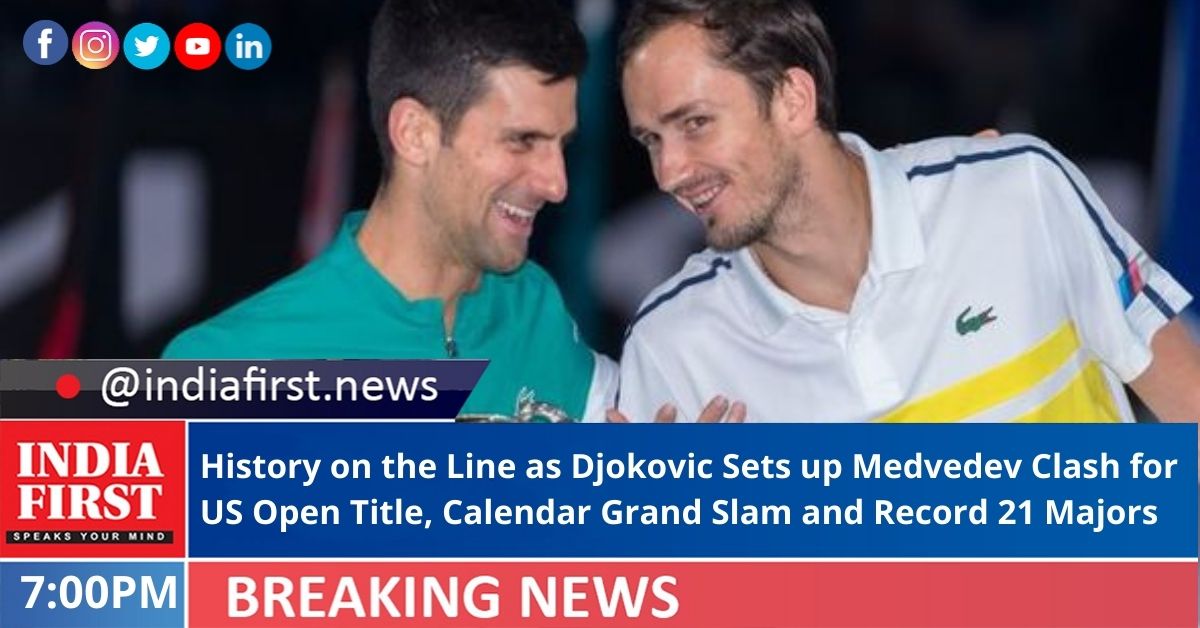 Alexander Zverev may have spoiled world No. 1 Novak Djokovic’s dream of a Golden Slam at the Tokyo Olympic Games, but the Serbian did not let the German halt his pursuit of the Grand Slam at the US Open as the winner of 20 majors won 4-6, 6-2, 6-4, 4-6, 6-2 today (IST) to set up a title clash with Russia’s Daniil Medvedev.

Djokovic battled past the fourth-seeded Zverev at Flushing Meadows and moved within one win of becoming the first man since Rod Laver in 1969 to complete a Grand Slam by claiming all four major trophies in a single season.

“I would like to say thank you, because the atmosphere was amazing, the best atmosphere of the tournament so far,” Djokovic told the Arthur Ashe Stadium crowd.

“These are the moments we live for. These are the kind of unique opportunities that we dream of every day when we wake up and are trying to find motivation to go out there and do the same things over and over again,” Djokovic told atptour.com.

“It pays off when you are playing in this incredible stadium with this atmosphere. Thank you so much for making it special.”

For most of the clash, Djokovic was patient. But after securing a double-break lead in the decider, the world No. 1, who is currently tied with Roger Federer and Rafael Nadal on 20 Slam titles apiece, stepped on the gas to triumph after three hours and 33 minutes.

Djokovic, who will play second seed Daniil Medvedev for history tomorrow, has already won the Australian Open, French Open and Wimbledon this year. A victory against the Russian would give him 21 major crowns.

“I’m going to treat the next match like it’s the last match of my career,” Djokovic said.

Zverev was by far Djokovic’s toughest test yet. For the 10th time this year at a major, the Serbian lost the opening set. But this occasion felt more dangerous, as the German had not only beaten him six weeks ago, but he entered the match on a career-best 16-match winning streak.

“Alexander is a big champion. He’s someone that I admire on and off the court. We get along very well, he’s definitely one of my best friends. We train a lot, we see each other a lot in Monaco, [which] he uses as a base,” Djokovic said. “He’s a great guy and an even better player. I knew coming onto the court today that it was going to be a great battle.”

Neither player was at his absolute best. But in an intense match, Djokovic maintained his cool in key moments and served impressively under pressure to emerge victorious.

Zverev’s big serves gave Djokovic trouble early on, allowing the German to sprint to the lead. But after taking the first set, the German got off to a slow start in the second.