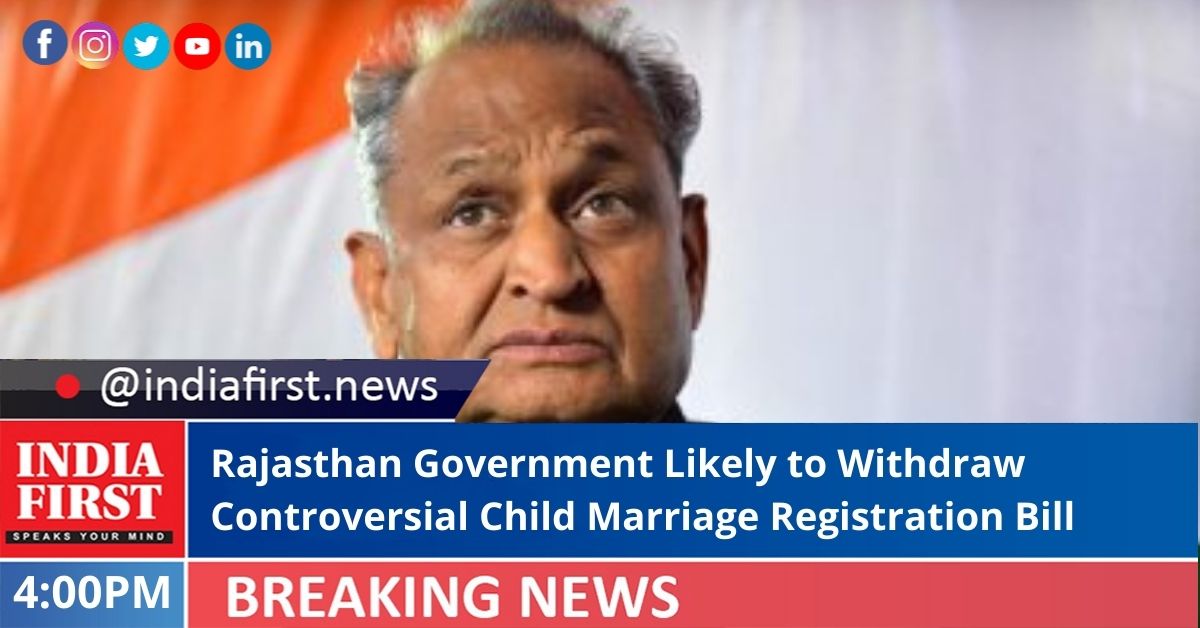 Aiming at setting the records straight, the Gehlot government in Rajasthan seems to be planning to withdraw the controversial Child Marriage Registration Bill, containing the provision related to the registration of child marriage.

Speaking on the occasion, he said, “A controversy has arisen in Rajasthan that child marriages are being registered after the Marriage Registration Bill was passed in the Legislative Assembly. There is no prestige issue as far as the Bill is concerned and we are getting it checked by the legal department.

“The Governor is requested to send the marriage registration Bill back to the government. We’ll show it to the concerned officials. We have already taken legal opinion on this. If further legal opinion gives negative feedback, we will not pursue it,” he added.

Gehlot said, “It was the Supreme Court’s decision that it was necessary to get every marriage registered. I hope that the legal opinion that is being taken will clarify things further. It will be ensured that there is no child marriage in Rajasthan at any cost, no compromise will be done in it.

It needs to be mentioned here that the Compulsory Registration of Marriages (Amendment) Bill was passed in the Assembly on September 17, which had a provision for registration of child marriages. After the controversy, this Bill has been put on hold by the Governor for the time being. Now CM Gehlot has announced to get this Bill back from Raj Bhavan.

On September 17, there was a huge uproar in the Assembly on the Bill related to the registration of child marriage. The BJP MLAS walked out from the House in protest against this Bill and the party has been demanding the withdrawal of this Bill from the very beginning.

The National Commission for Protection of Child Rights (NCPCR) had written a letter to the Rajasthan government recently regarding this Bill. The Commission had asked to reconsider and review the provisions of the Bill. A petition has also been filed against the Bill in the court. Many social activists have also opposed it. After the controversy, the Governor withheld the Bill.