John Abraham: 'Satyameva Jayate 2' is a Film for the Masses | India First e Newspaper Skip to navigation Skip to content 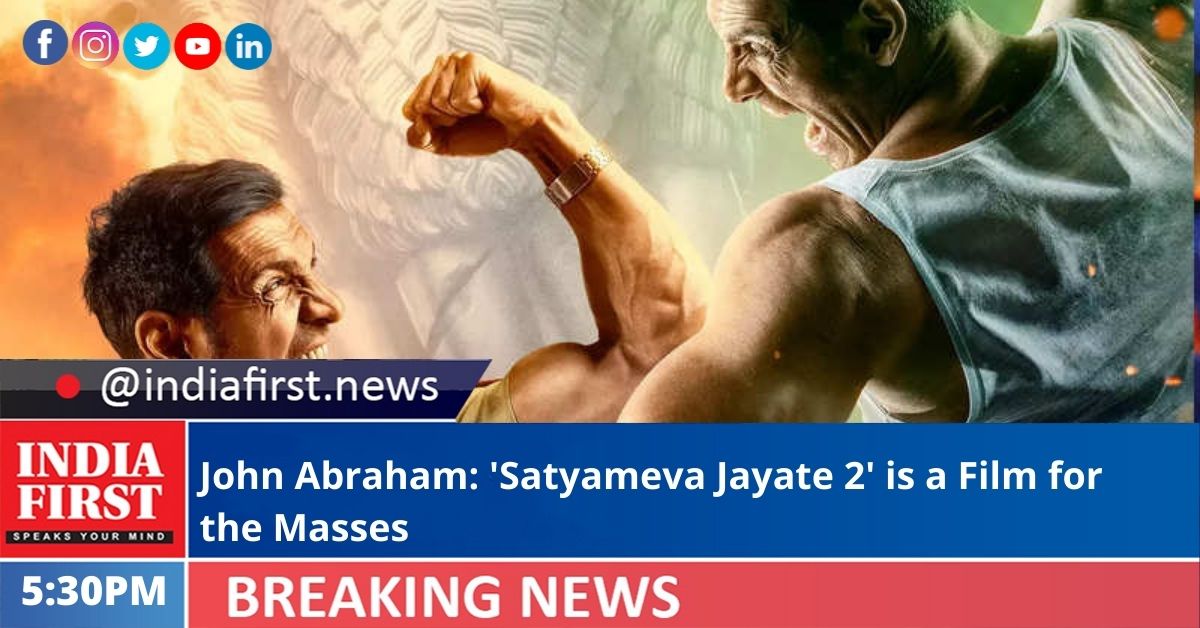 Bollywood actor John Abraham, who is playing a triple role for the first time in his career in his upcoming film ‘Satyameva Jayate 2’, says that the film has been quite specifically made for the mass audience who go to the theatres and enjoy the out-and-out commercial film.

The film is a sequel and the first instalment was released in 2018.

According to the actor, the second part is made purely after receiving approval from the audience that translated at the box-office.

While after the release of the trailer, on social media, it has received a lot of negative responses, John in conversation opens up on his thoughts.

John said: “Firstly, our film ‘Satyameva Jayate 2’ is made for the mass audience and not for the niche. People who buy tickets, go to the theatres, especially the audience of single-screen theatres in a small town, are not bothered about the reviews and critical explanation. They want entertainment.

“That is why their enthusiasm is also reflected in the box-office collection. For us, actors and producers, that is the most important factor. I also must mention that there is a clear disconnect between what is happening on social media and how that is played out on box-office collections. We made this film clearly for the mass audience who came to watch ‘Satyameva Jayate’.

He further added, “Before the release therefore we as makers of the film are more concerned about the number of screens, first-day collections and everything to do with the business of the film. Post pandemic now that things are coming back, theatrical release and bringing people back to the theatres is very important to boost the business.”

Talking about his character in the film, John said, “I knew that I will be playing two characters, one that of the vigilante which is inspired by the first part of the film and second is of a police officer. They are twin brothers and I am also playing the father of these two youngsters when the story goes to a flashback.

“Initially, I was not convinced with playing the father’s character but eventually, I did. That character is set in a different time and era. Whereas the story of DSP Jay and Satya is set in the present time. Though this was not the first time I played a police officer, as you know I played a real-life iconic personality like late DCP Sanjeev Kumar Yadav in ‘Batla House’ but playing DSP Jay was very different. He is a righteous yet fun guy who takes off his uniform in a face-off with a vigilante. It will be fun to watch characters for our audience.”

‘Satyameva Jayate 2’ will be released theatrically on November 25.