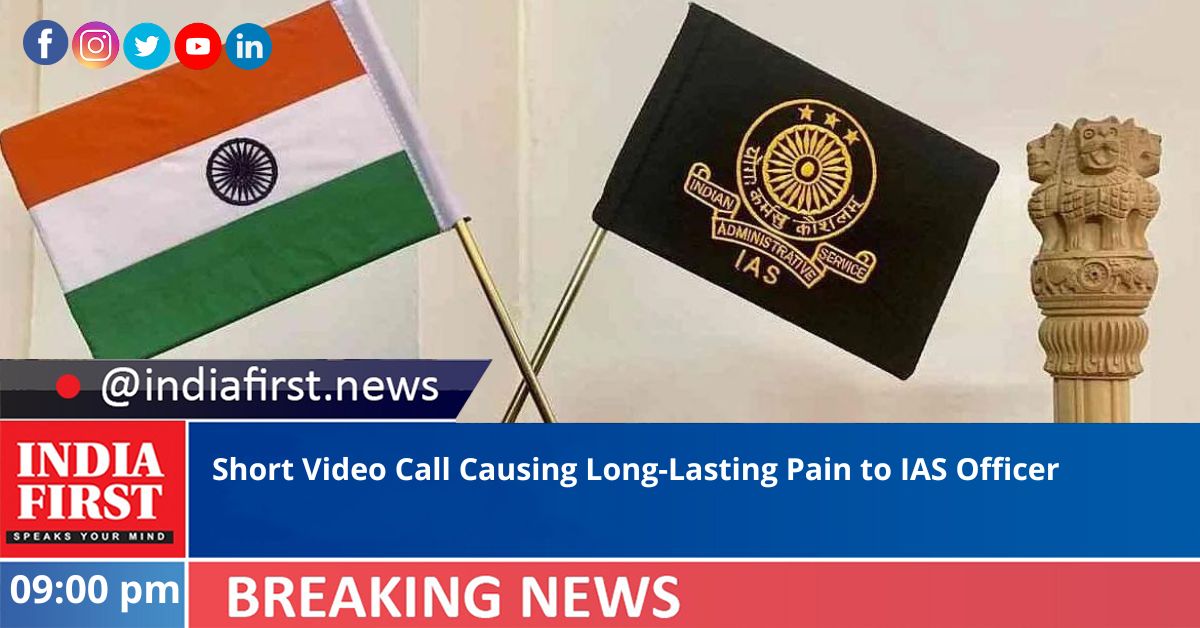 It was a 16-second video call and this IAS officer has not slept properly for the past 18 months.

His family life is in a shambles and he is under severe stress.

It was in February last year that the officer received a video call from a woman.

Less than ten minutes later, he received his morphed photograph with the woman in a compromising position. Before he could realize what had happened, the photographs had been sent on WhatsApp to his three daughters and wife.

The number used was ‘unavailable’ after this and he got a call on his landline number asking for Rs five lakhs if he did not want the photographs to go viral.

The officer contacted the cyber cell that got down to work. The callers were traced and sent to jail but they walked out on bail within five months.

“I have not slept since this happened. I cannot face my daughters and my wife even though they know that the photographs were morphed. Every unknown call unnerves me and my life is in a state of deep distress,” he said.

Uttar Pradesh has emerged as a ‘huge market for nude video calls’.

Uttar Pradesh Cyber Crime SP, Triveni Singh said, “Maximum crime in cyber world today is related to nude photographs that are morphed from video calls. You answer a video call and the scammers take screen shots and morph them into nudes which are then used for blackmailing.”

He said the maximum cases of this kind were being reported in Uttar Pradesh today.

“I am sure that there are many more cases which go unreported because of the social stigma,” he said.

When asked how to check the menace, Singh said, “I would advise people not to answer unknown callers. You can ask your friends to message you before calling so that you know where the call is coming from.”

He warned against making and receiving video calls that allow the scammer to take screen shots of the victim and then morph the pictures which are used to extort money.

Another new way of scamming people is the ‘buy and sell sites’.

Triveni Singh, who is a Certified Ethical Hacker (CEH) and Computer Hacking Forensic Investigator (CHFI) from EC-Council USA and has done a certificate course in Digital Transformation from the Indian School of Business, Hyderabad and also a certificate course in Forensic Accounting and Fraud Examination from West Virginia University (USA), said that goods are offered at lucrative prices to tempt the buyers and the minute you scan the QR code, you lose your money.

“Recently, we have found that offers of instant loans is another way of scamming people. The offers come with ridiculously low interest rates and the moment a person clicks on the links, he gets scammed and loses money from his account,” he said.

Messages telling the consumer that he will face power disconnection because of unpaid bills, is another increasingly popular way of scamming.

Ashutosh Sinha, a businessman, recently got one such message.

He said, “I thought that may be my staff had not paid the bill by the due date so I clicked on the link and was directed to a form which I filled up. The form sought information of my power bill number and debit card which I gave without even an iota of suspicion. Minutes later, I got a message from my bank informing me that Rs 75,555 had been deducted from my account.”

Sinha lodged a complaint but the number was no longer in existence and the call was traced to Odisha.

Another police official, dealing with cyber crime cases, said that scammers usually bounce off calls from different states which makes it extremely difficult to pin them down.

When asked how people can avoid getting trapped, Triveni Singh said that not responding to unknown calls, video calls and unidentified mails was the only way to prevent getting scammed.

“We are creating awareness among people on the issue of cyber crime. People use the phone but do not realize how they can be duped through this. Chinese apps also make one vulnerable to getting duped,” he said.

He added that police personnel posted in the cyber cell were being given advanced training in the use of technology and tool training was also being provided on a priority basis.