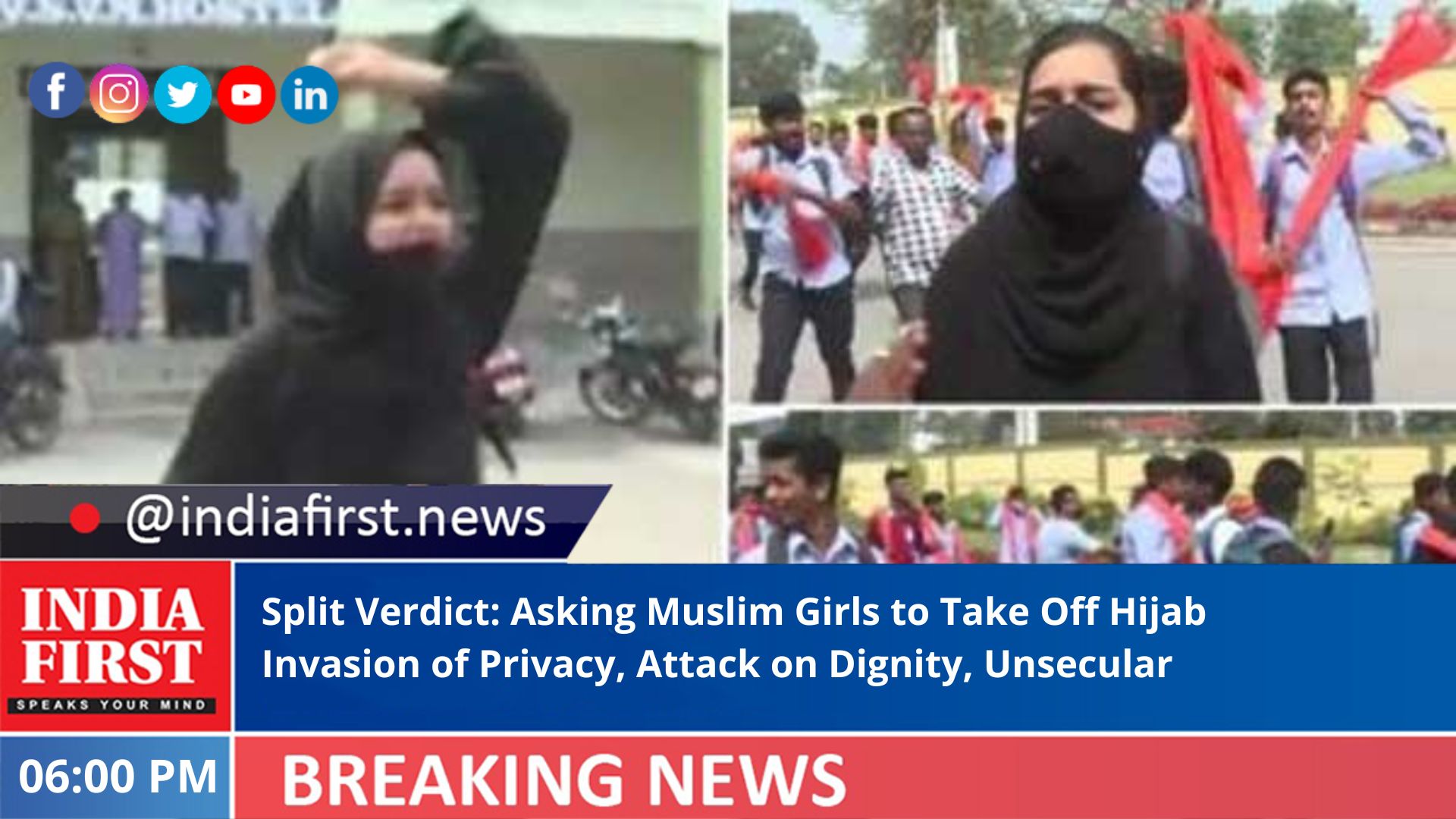 Supreme Court judge Justice Sudhanshu Dhulia, in the split verdict on Karnataka hijab ban, on Thursday said by asking girls to take off their hijab before they enter school gates is an invasion of privacy, attack on dignity, and denial of secular education.

Justice Dhulia said: “By asking the girls to take off their hijab before they enter the school gates, is first an invasion of their privacy, then it is an attack on their dignity, and then ultimately it is a denial to them of secular education. These are clearly violative of Article 19(1)(a), Article 21 and Article 25(1) of the Constitution”.

The petitioners had moved the apex court, challenging the Karnataka High Court verdict refusing to lift the ban on hijab in educational institutions of the state.

Justice Dhulia said there shall be no restriction on the wearing of hijab anywhere in schools and colleges in Karnataka. He added that the unfortunate fallout of the hijab restriction would be that they would have denied education to a girl child.

“A girl child for whom it is still not easy to reach her school gate. This case here, therefore, has also to be seen in the perspective of the challenges already faced by a girl child in reaching her school. The question this court would put before itself is also whether we are making the life of a girl child any better by denying her education merely because she wears a hijab!” he said.

He added that the constitutional scheme, wearing a hijab should be simply a matter of choice and it may or may not be a matter of essential religious practice, but it still is, a matter of conscience, belief, and expression.

Justice Dhulia said if a girl wants to wear hijab, even inside her class room, she cannot be stopped, if it is worn as a matter of her choice, as it may be the only way her conservative family will permit her to go to school, and in those cases, her hijab is her ticket to education.

In a 73-page judgment, he said, “fraternity, which is our constitutional value, would therefore require us to be tolerant, and as some of the counsel would argue to be, reasonably accommodating, towards the belief and religious practices of others. We should remember the appeal made by Justice O. Chinnappa Reddy in Bijoe Emmanuel — our tradition teaches tolerance; our philosophy preaches tolerance; our Constitution practices tolerance; let us not dilute it.”

He emphasised that the Government Order dated 5 February, 2022, and the restrictions on the wearing of hijab, also goes against constitutional values of fraternity and human dignity.

Justice Dhulia said: “Liberty, equality, fraternity, the triptych of the French Revolution is also a part of our Preamble. It is true that whereas liberty and equality are well established, properly understood, and recognised concepts in politics and law, fraternity for some reasons has largely remained incognito. The framers of our Constitution though had a different vision. Fraternity had a different, and in many ways a much larger meaning with the main architect of our Constitution, Dr Ambedkar”.

He added that schools, in particular our pre-university colleges are the perfect institutions where children, who are now at an impressionable age, and are just waking up to the rich diversity of this nation, need to be counselled and guided, so that they imbibe our constitutional values of tolerance and accommodation, towards those who may speak a different language, eat different food, or even wear different clothes or apparel!