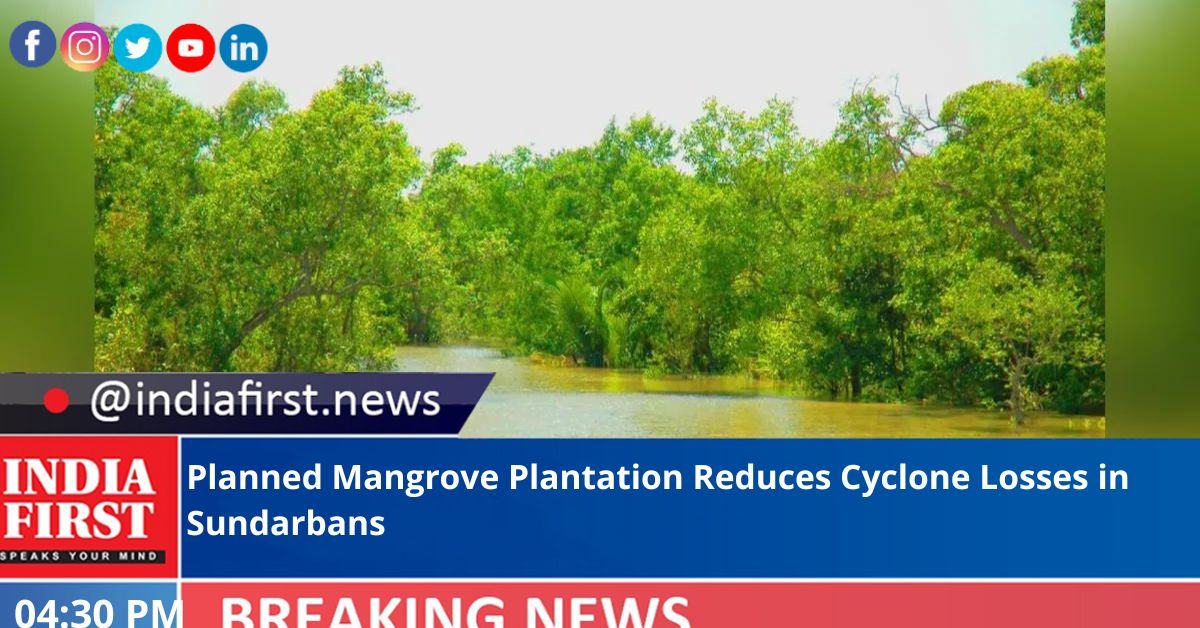 With the prediction of a series of cyclonic storms hitting the coastal belts of West Bengal where the Sundarbans area will be most vulnerable, a group of environment activists under the aegis of Nature Environment & Wildlife Society (NEWS) started a mission in 2007 to achieve permanent and concrete protection from the cyclone ravages.

What started as a mission to check the cyclone ravages in the Sundarbans area scattered over the coastal belts of South 24 Parganas mainly and North 24 Parganas partially, has now become a symbol of “women empowerment”. The initial initiative for achieving this permanent protection started involving local women from just three villages in the region, which over the years has emerged as a major success story.

According to conservationist and wildlife expert, Biswajit Roy Chowdhury, who is also the founder secretary of NEWS, since 2007 there were predictions of the Sundarbans becoming the most vulnerable to the effects of climate change that will result in a series of cyclonic storms.

“Large scale mangrove forestation was the only answer for achieving a permanent solution to resist the cyclone ravages. Then started the initiative by NEWS by involving the local women. What started in a small way in 2007 has now become a story of success,” he said.

NEWS joint secretary and project director Ajanta Dey narrated how after starting in a small way, “Project Green Warriors” involving local women in large scale mangrove forestation has become a success story not only in resisting the cyclone ravages but also in ensuring economic empowerment of women in the entire Sundarbans region.

According to her, through the state forest department practiced mangrove forestation during July every year, since the plantation was monoculture in nature nothing remained when winter came at the end of the year. Lack of monitoring was also a reason for the destruction of the plantations.

“There came the idea of starting a long-term initiative of large-scale mangrove forestation involving the local women coming from the extremely economically backward families in the region that will have a long-term resistance capability for sustaining cyclone ravages on one hand and will also enable economic empowerment of the local women on the other hand,” Dey said.

The project started in 2007 with just around 50 hectares of land spread over three small local villages of Dulki-Sonagaon, Amlamethi and Mathurakhand.

“Mangrove nurseries were set up for the local women, who were also given the task of proper monitoring of the yields. Just around 150 local women from these three villages were involved in the process initially. At the same time, our volunteers along with the local women also started sensitizing the local people about avoiding certain practices like cattle grazing in the mangrove plantation areas or fishing net-dragging that were uprooting the plantation and leading to soil erosion. That sensitization programme worked and between 2007 and 2009, the yield was really satisfactory,” she said.

Then in May 2009 came Cyclone Aila, whose tail only touched the Sundarbans and moved to Bangladesh. “While the rest of the Sundarbans was severely affected by the touch of the tail, the patches of land where the mangrove forestation was done under the project was absolutely untouched. To me, Cyclone Aila was a blessing in disguise as it made all concerned including the state forest department feel the necessity of large-scale mangrove forestation and making the embankment resilient to future cyclonic ravages,” she said.

The rest is history as NEWS started fund mobilisation and doing risk-mapping. Between 2010 and 2015 over 18,000 local women and around 4,600 hectares of land scattered over 183 villages in 14 community development blocks in the Sundarbans areas were brought under this large-scale mangrove forestation.

“It was a tough job to accomplish. Initially, the local people did not take the work of the women involved in the project seriously. So, the green workers were provided with green sarees as uniforms to signify the importance of their assignments,” Ajanta Dey said.

According to forest minister Jyotipriyo Mullick the mangrove forestation model in West Bengal has become an example throughout the country and other coastal states too are keen to implement it.

“Recently six coastal states namely Gujarat, Odisha, Karnataka, Kerala, Maharashtra and Tamil Nadu have expressed keen interest in importing nine varieties of mangrove seeds from West Bengal. These state governments are also keen on adopting West Bengal’s model of mangrove forestation in their states and for that purpose they have also sought the advice of experts from our state,” the minister added.

Mangrove plantation has also been included in the 100-day job project under the Mahatma Gandhi National Rural Employment Guarantee Act.