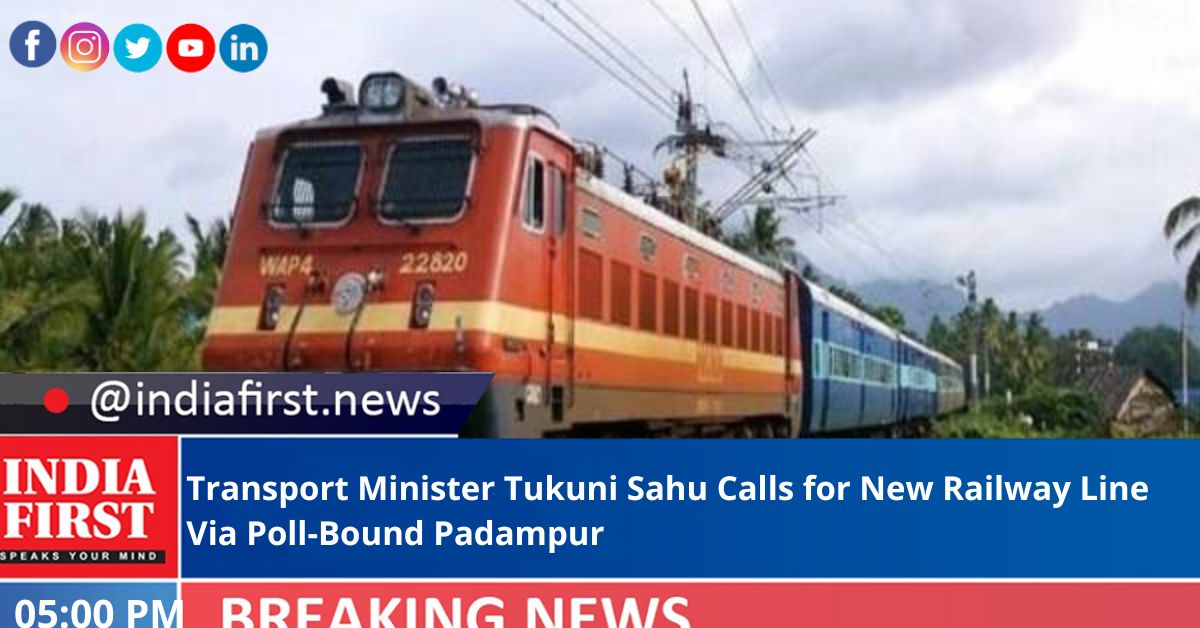 The Transport Minister of Odisha, Tukuni Sahu, on Sunday wrote to Railway Minister Ashwini Vaishnaw for sanctioning a new railway line between Bargarh and Nuapada via the poll-bound Padampur Assembly constituency.

Sahu wrote to the Railway Minister after receiving a memorandum from the people of Padampur submitted to Chief Minister Naveen Patnaik for approval of the railway project.

The proposed railway project can offer an important communication link to the people of the two districts and act as a potential catalyst for rapid economic development of western Odisha, she said.

With the new line, Sahu said, the western Odisha region will have shorter and quicker connectivity with coastal Odisha through the Khurda-Balangir line.

“Since 2018, the Chief Minister and our government have been requesting the Railway Ministry to sanction the important railway line between Bargarh and Nuapada via Padampur,” she mentioned in her letter.

The project has a rate of return (RoR) of 17.31 per cent as per a study undertaken by the East Coast Railway (ECoR).

Sahu also mentioned that Union minister Dharmendra Pradhan had made an announcement at a public meeting on December 15, 2018 that the Central government has sanctioned a new railway line project from Bargarh station to Nuapada Road station. Pradhan had also highlighted it in his social media account.

However, Sahu said, contrary to the announcement made by Pradhan, the Railway Ministry in 2019 communicated that the proposed new line has been shelved as it did not appear to be financially viable, despite the high RoR, which is much beyond the requirement for approving a new line.

Further, the Railway Board had asked the Odisha government to contribute free land and resettlement and rehabilitation cost for land acquisition for considering the project.

Following the request of the board, Patnaik had approved free land for the entire project (private, government and forest land) and also pledged to provide Rs 300 crore towards construction of the project, so that it becomes even more lucrative for the Railways to sanction the project, the transport minister pointed out.

Despite the Odisha government coming forward to offer all cooperation, the important project is still waiting to advance from paper work and surveys through other agencies, she wrote.

“In the interest of the people of Odisha, I would request you to reconsider the decision of your ministry and sanction this very important railway line and entrust ECoR to begin the land acquisition process and start construction work expeditiously,” Sahu told the Railway Minister.