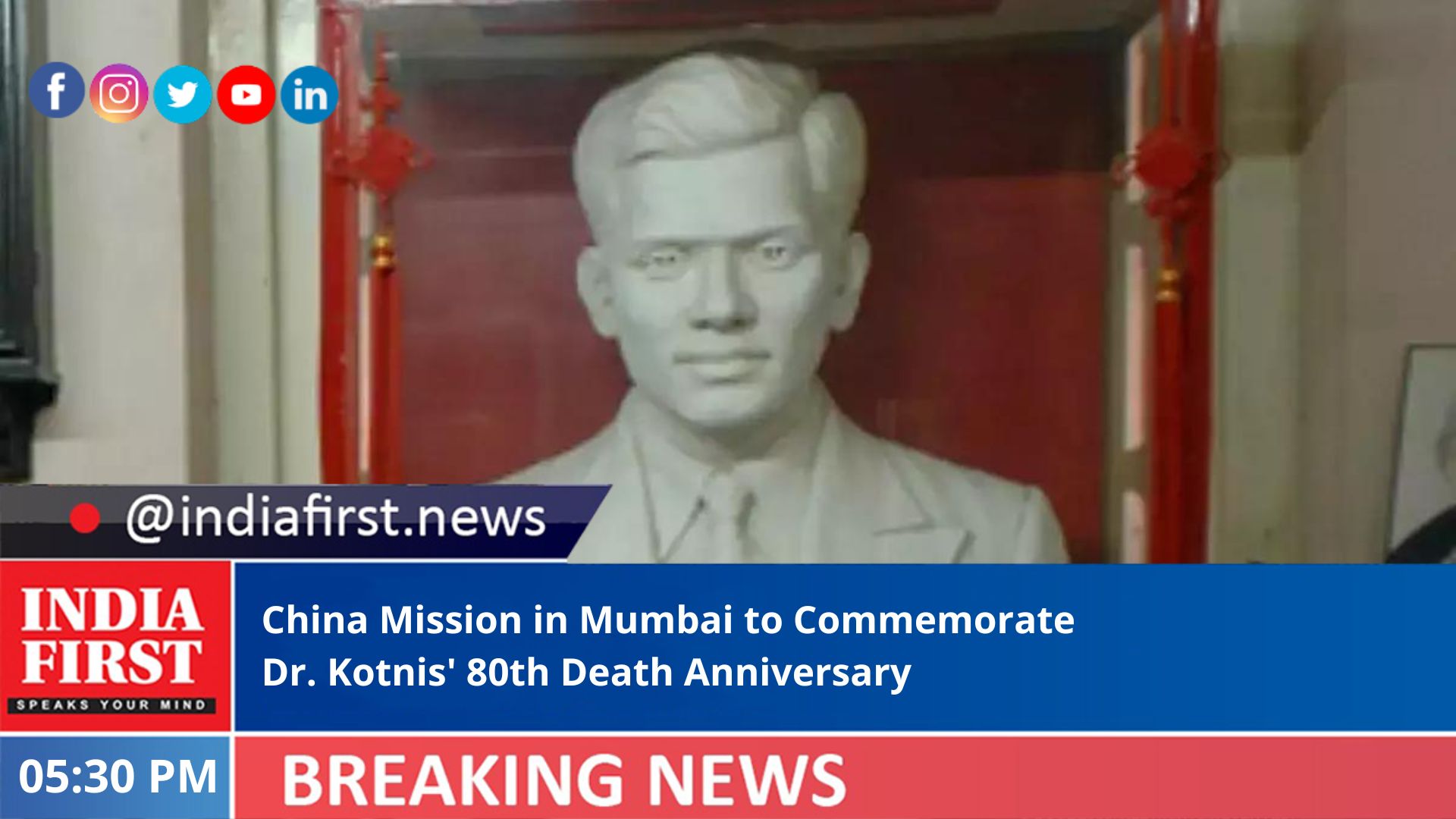 The Dr. Dwarkanath Kotnis Memorial Committee and the Consulate General of China in Mumbai will commemorate and pay homage to the legendary medico Dr. Dwarkanath Shantaram Kotnis on the occasion of his 80th death anniversary, an official said here on Friday.

Dr. Kotnis, revered in China and India alike, passed away in China at the young age of 32 on December 9, 1942 and the memorial event shall be held on Saturday, said Consul General Kong Xianhua.

The tributes will be in memory of Dr. Kotnis’ services to the Chinese people as part of the Indian Medical Mission there in 1938, and the focus of tomorrow’s event would be aInheriting the Spirit of Dr. Kotnis & Working together for a bright future, said Xianhua.

“We honour his heroic deeds to renew his spirit in the new era. Chairman Mao wrote in the elegy that the Chinese people will never forget Dr. Kotnis’ spirit of internationalisma He arrived in Chian at the most dificult time of the country’s anti-Fascist war, rescued the wounded in the front-line, and devoted himself to the liberation of the Chinese people,” he said.

The diplomat added his countrymen will forever remember how Kotnis devoted his precious life to the cause of China under very tough conditions, and the Chinese people admire and cherish his memory even today.

There are many commemoration events lined up in China on Friday and also during the annual Qingming Festival to pay homage to martyrs like Kotnis.

Kotnis was born in Solapur on October 10, 1910 and acquired his medical degree from the University of Bombay through the Seth GS Medical College & KEM Hospital here.

After Japan invaded China, the Communist General Zhu De had requested Congress leader Pandit Jawaharlal Nehru to send a medical team, and the then Indian National Congress President Subhash Chandra Bose made the necessary arrangements and organised the funds for the voluntary mission.

When Dr. Kotnis was barely 28 and preparing his Master’s, he took his family’s permission and joined the humanitarian Indian Medical Mission Team to China.

The mission — with Dr. M. Atal from Allahabad, Dr. M. Cholkar from Nagpur, Dr. B.K. Basu and Dr. D. Mukerjee from Kolkata, besides Kotnis from Solapur — first went to Hankou Port in Wuhan in September 1938.

Later it was sent to Yan’an where they met top Chinese leaders like Mao Zedong, Gen. Zhu De and others.

During the IMMT sojourn there, Dr. Kotnis worked under trying conditions to treat and operate upon wounded soldiers in mobile clinics virtually non-stop for days for nearly five years.

In 1940, Dr. Kotnis, who had learnt Chinese, met a local nurse Guo Qinglan and they married in December 1941, and the couple had a son Yinhua in August 1942.

Barely three months later, owing to the immense stress of his medical duties on the warfronts, Dr. Kotnis suffered major health issues and passed away on December 9, 1942.

Shocked by his demise, subsequently, China honoured him with a statue, a memorial, tomb and other honours, besides a memorial in his hometown of Solapur.

Successive Indian Presidents and Prime Ministers as well as top Chinese leaders have remembered Dr. Kotnis and his family in Maharashtra, and his selfless services to the Chinese people in their time of need.