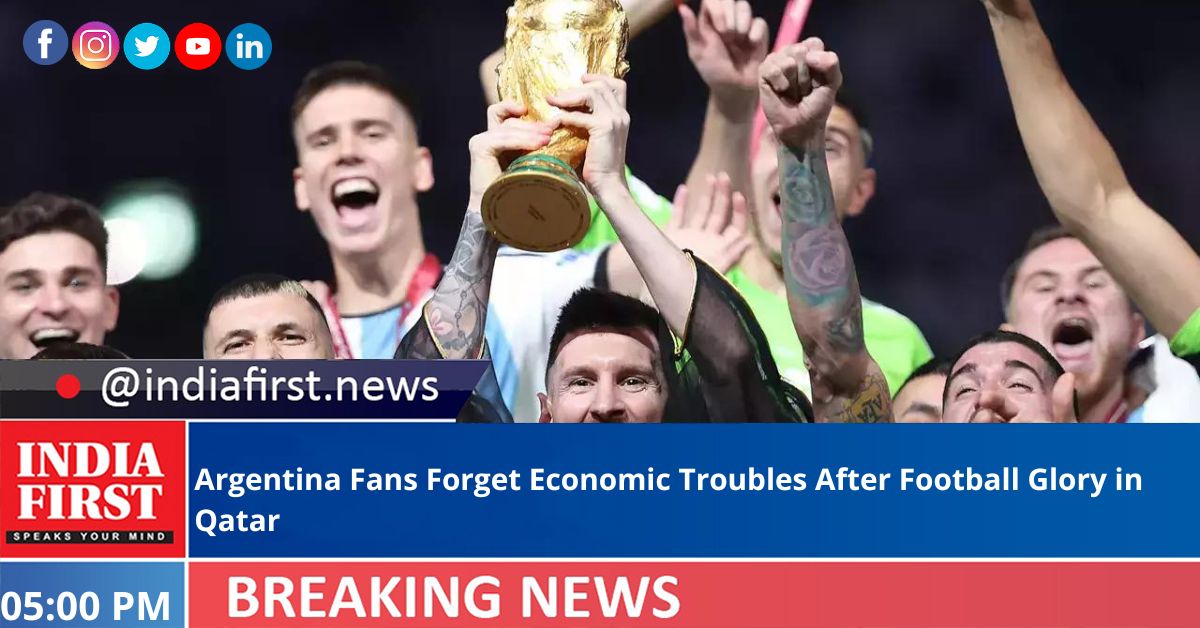 Argentina nosedived into an economic crisis in 2018 and it’s still far from fully recovered and for the common man and woman on the streets it is exceedingly complicated to understand.

Rising prices, inflation and the frequently government announced policy changes to curb the crisis are everyday news for the Argentinians, but nothing beats the news of the national team winning the coveted FIFA World Cup trophy for the third time.

All their economic worries were set aside by the emotional and ecstatic fans as they lined the boulevard in Qatar following Sunday’s incredible World Cup final between Argentina and France.

The smiling and victorious Argentinian team were spilling out of the open-top bus that led them down the parade route as they basked in the glory of champions and had a moment to enjoy their win.

Completing the celebrations, fireworks lit Qatar’s cloudless midnight sky to the delight of the tens of thousands of people to celebrate the twin occasions — final match of the 2022 World Cup tournament and the National day.

Thousands of fans were a bundle of joy and thrilled to no end as all the monetary worries flew away with one win.

If back home they had to worry about a wide menu of currency exchange rates — namely the official rate and its taxes, the parallel market, and a plethora of others depending on the industry sector, they had nothing to do with it in Qatar. It was football and only football which took over during the biggest football tournament.

Some of them were not able to get inside the stadium, with 40,000 having made it to Qatar for the event. Others could not buy the unreasonable and exorbitant FIFA tickets sold at non-FIFA platforms, but all the sorrows and disappointments were thrown in the winds to join the celebrations.

The infectious energy of Argentina’s supporters at the World Cup final spilled out from the stadium into a large and boisterous parade down Lusail Boulevard, with the newly crowned champions as the star attraction.

Quite a few took to social media to share Argentine fans’ reaction to their win at the World Cup at Lusail Stadium in Qatar wherein Argentina beat France 4-2 on penalties.

One of them was Argentinian businessman and celebrity Nico Bolzico who took to Instagram on Monday.

“We grow up playing football, regardless if you are good or bad at it; dad taking you to the stadium is one of your first childhood memories; some of your best memories are about football; you made friends because of football; we can spend hours talking about football; you cry for football; football is part of your culture and DNA,” Bolzico wrote.

Others described the six-goal final as ‘rollercoaster’ as first Argentina took a 2-0 and then France equalized and then again Argentina took the lead at 3-2 only for the Les Blues to make it 3-all and take into penalty shootout.

“It was a rollercoaster and it was painful. Argentina clearly dominated from the start until the 79th minute when Kylian Mbappe hit two back-to-back goals to make a French comeback possible. When we took the lead during extra time and France equalised again, that was pain and suffering. Argentina rallied around Messi and we’d a goalkeeper who stood up to the pressure. This World Cup is for Messi,” Agustin Ronzoni, of Buenos Aires, said.

For Dalio Bellot it was a repeat show of what happened in the quarterfinals against the Netherlands.

“The two games were so similar. Each time, we dominated and led by two goals, conceded two, and then won on penalties. France is a great team. Towards the end, we put five players in defence to try and safeguard the lead, but it didn’t work out. In terms of sheer talent, France may be a better team. But our mentality and ground support were beyond exceptional,” Bellot, an Argentinian who lives in the US.

Some fans felt the 2-1 loss in the first match against Saudi Arabia was a blessing in disguise.

“The team, coming into the World Cup with a 36-game unbeaten streak, may’ve been a bit rusty. But Saudi Arabia jolted them awake and since then, they played like the Argentina we all love. In hindsight, the loss was the best thing to happen to us in this tournament,” Marco said.

Costumed performers, Qatari police on horseback and camel, and a group of volunteers who took part in the tournament also participated in the parade.