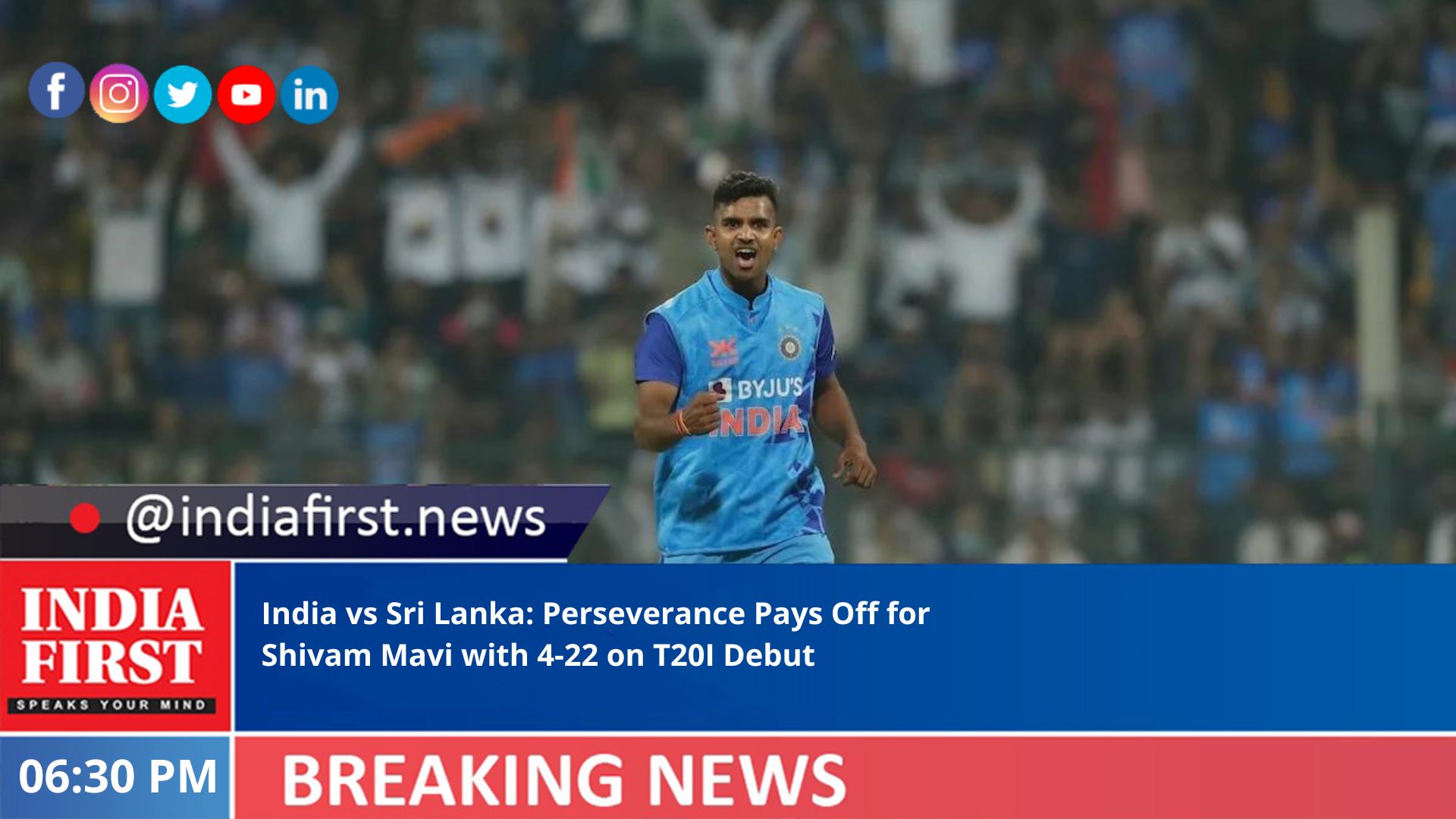 As his team-mates from the 2018 U-19 World Cup-winning team — Prithvi Shaw, Shubman Gill and Arshdeep Singh — made it to the Indian team in various formats, medium pacer Shivam Mavi was still waiting for an opportunity, knocking on the door with good performances in domestic cricket and the Indian Premier League (IPL).

On Tuesday, the 24-year-old pacer from Uttar Pradesh got his opportunity when Arshdeep was unavailable for selection for the first T20I against Sri Lanka at the Wankhede Stadium and made a grand entry into international T20 cricket.

Mavi made full use of his debut by claiming 4-22 in his four-over spell, helping India to a narrow two-run victory. Harshal Patel 2-41 and Umran Malik 2-27 were the other successful bowlers but Mavi caught the eye as India bowled out Sri Lanka for 160 in 20 overs after Deepak Hooda (41 not out) and Axar Patel (31 not out) helped the hosts recover from a precarious 94/5 to a modest 162/5 in 20 overs.

Defending the small modest total, short by at least 12-15 runs as Hooda accepted after the match, was a tall task but the Indians executed their plans superbly but were lucky to win the match off the final ball of the match.

Mavi played a crucial role in the victory, opening the bowling with skipper Hardik Pandya and eventually became the third Indian bowler to take a four-fer on debut. He sent back Pathum Nissanka and Dhananjaya de Silva in the power-play.

The pacer came back to provide India a vital breakthrough by dismissing Wanindu Hasaranga, who had shared a 40-run partnership with skipper Dasun Shanaka, and was looking like propelling Sri Lanka towards victory.

“I was waiting for this moment for the last six years. Had injuries in between and it felt my dream will never come true. Nerves were 3-4 on a scale of ten because you know what to expect when you have played the IPL,” Mavi said after the match.

Mavi’s nerves of steel, ability to control line and length and execute the plans caught the eye as he made a dream debut on Tuesday. The right-handed medium pacer said he likes to bowl during power-play as it gives him a chance to attack.

“My idea in the powerplay is to attack and get them out. My favourite dismissal was the first one, getting him (Nissanka) bowled,” said the U-19 World Cup winner.

Born on November 28, 1998 in Meerut in a middle-class family, Shivam’s upbringing was in Noida in Uttar Pradesh where his businessman father Pankaj Mavi had shifted to when he was very young.

Coming from a Gujarati family settled in Uttar Pradesh, Mavi took up cricket when he was 11. His initial training was under local coach Phoolchand, who taught him the nuances of the game and identified his talent for medium pace bowling.

The right-hander made his mark in the age-group events representing U.P before being picked in the India team for the 2018 ICC U-19 World Cup in New Zealand. That team went on to win the title and Mavi was a key player in the campaign, claiming 14 wickets in all at an average of 15.21.

He made first-class debut in the 2018 Ranji Trophy and incidentally claimed a four-wicket haul on debut against Goa. He claimed his first five-fer in his second Ranji match against Odisha. Mavi has come up the rankings, having played for India U-19, India Emerging Players, Vijay Hazare Trophy and Ranji Trophy, IPL.

In the 2018 auction, he was picked by Kolkata Knight Riders and was with them till 2022 when he moved to Gujarat Titans. The defending champions Titans picked Mavi for Rs 6.00 Cr during IPL mini-auction, last month.

It was with the Titans that Hardik Pandya got to know Mavi and gained confidence in his abilities. Pandya had decided to back the young players in his squad in the three-match series against Sri Lanka and he showed faith in youngsters’ abilities at the first opportunity.

“I have seen him (Mavi) bowling well in the IPL and I just told him to simply bowl. I told him, ‘I am backing you. Even if you get hit, it’s fine’,” Pandya said after the match.

Mavi repaid that faith with a superb performance and showed that given the opportunity, he can take over the responsibility on a permanent basis.