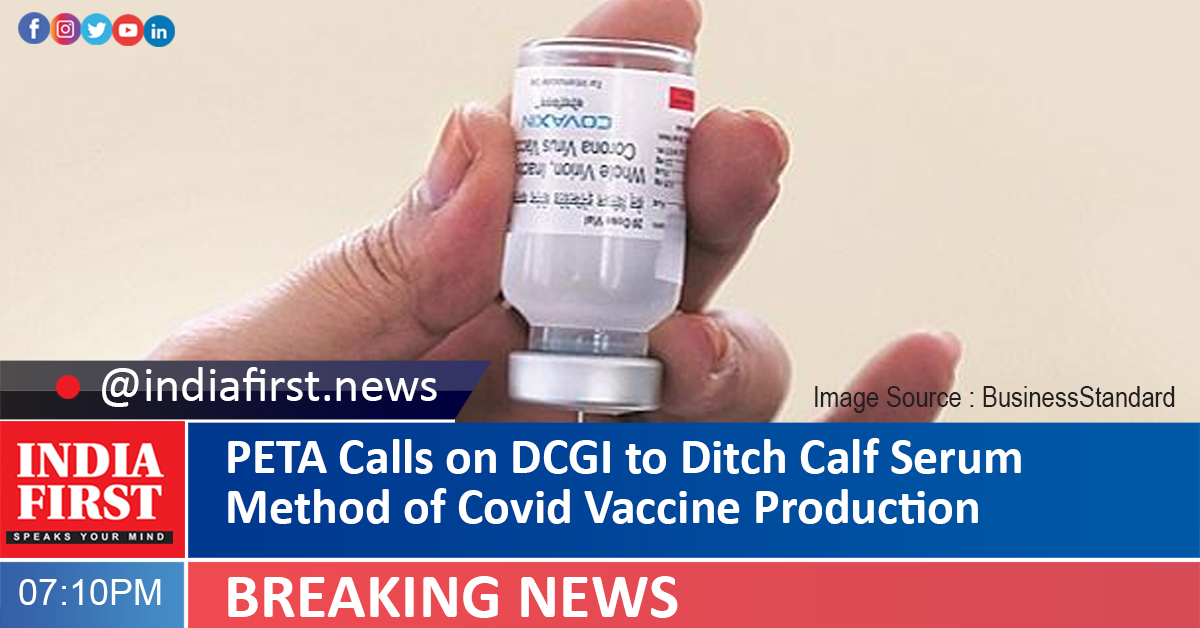 People for the Ethical Treatment of Animals (PETA) India today requested the Drugs Controller General of India (DCGI) to replace Newborn Calf Serum (NBCS) with animal-free chemical solution, in the production of the Covid-19 vaccine, Covaxin.

PETA wrote a letter today morning to DCGI’s Dr V.G. Somani to direct vaccine manufacturers to consider its proposal following report that Covaxin, India’s indigenous Covid-19 vaccine developed by Bharat Biotech in collaboration with the Indian Council of Medical Research (ICMR), uses NBCS during the production stage, which is extracted from the blood of slaughtered calves under 20 days old.

“The calves used in the extraction of this serum are taken away from their mothers shortly after birth, which traumatises and distresses both the mother and calf,” says PETA India Science Policy Adviser Dr Ankita Pandey.

“PETA India looks to the Drugs Controller to ensure that vaccine manufacturers switch to available animal-free media that overcome the limitations associated with the use of animal-derived serum.”

The Prevention of Cruelty to Animals (Slaughterhouse) Rules, 2001, prohibits the slaughter of pregnant animals and animals under 3 months of age – therefore, the use of serum obtained by slaughtering a calf younger than 20 days of age for vaccine production should also not be allowed.

Numerous states in India have banned the slaughter of cows and sometimes calves, bulls, and buffaloes. In a country where killing cows and often calves is prohibited by law, it would be considered inappropriate and unethical by most to import and use NBCS manufactured by killing those same animals in other countries.

The use of animal-derived components such as NBCS in vaccine production compromises the quality and reproducibility of research and is often associated with the risk of contamination by non-human proteins and pathogens.

“Animal-free media are already commercially available and can be used to grow Vero cells for virus production instead of using NBCS extracted by slaughtering calves,” PETA India said in the letter.

PETA India argues that modernising methods of vaccine production is an immediate necessity –  particularly in a country like India, whose public has religious, cultural, and emotional connections with cows and calves and where harming them is a punishable offence.

“PETA India and its affiliate scientists have been leading efforts to end the use of animals for the production of serum. PETA Science Consortium International, of which PETA India is a member, has online resources that researchers can use to replace foetal bovine serum and NBCS in cell culture media.”

PETA India’s request comes a day after the Central government released a clarification that Covaxin does not contain newborn calf serum at all.

Noting that “facts have been twisted and misrepresented”, the government said: “Newborn Calf Serum is used only for preparation or growth of vero cells.”

Noting that different kinds of bovine and other animal serum are standard enrichment ingredient, and they are used globally for vero cell growth, the Union Health Ministry said vero cells are used to establish cell lives which help in production of vaccines.

“This technique has been used for decades in Polio, Rabies, and Influenza vaccines. These vero cells, after the growth, are washed with water, with chemicals (also technically known as buffer), many times to make it free from the newborn calf serum. Thereafter, these vero cells are infected with coronavirus for viral growth.

“The vero cells are completely destroyed in the process of viral growth. Thereafter this grown virus is also killed (inactivated) and purified. This killed virus is then used to make the final vaccine, and in the final vaccine formulation no calf serum is used.”