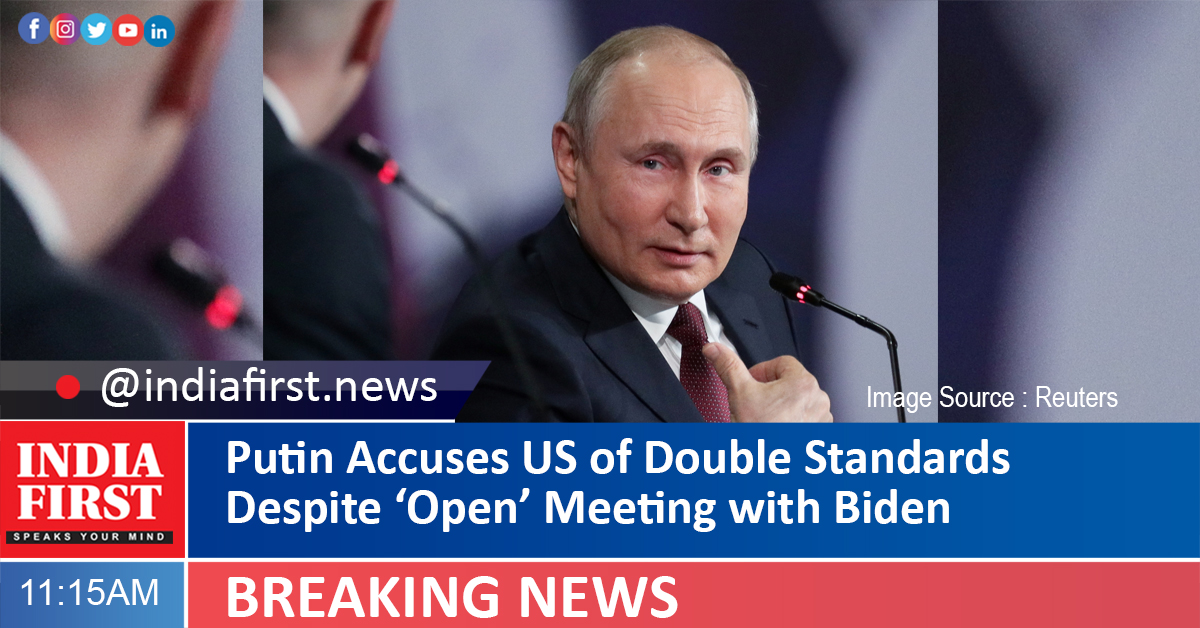 Russian President Vladimir Putin lashed out at the US on arms control, human rights, cyber-attacks, among other issues, after “constructive” talks with his American counterpart Joe Biden.

“As for the general assessment, I believe there was no hostility at all,” Putin said during his solo press briefing, adding that the meeting, the first of its kind since Biden took office in January, was “open” and with “no pressure of the parties on each other.”

Putin said that the two sides “differ in many respects” but “showed willingness to understand each other and seek ways to bring the positions closer,” and the pivotal face-to-face discussions, held at the 18th century Villa La Grange in Geneva, was “quite constructive”, the Xinhua news agency reported.

Although the two sides have agreed to allow their ambassadors to return to Moscow and Washington respectively, and to launch a strategic stability dialogue for future arms control and risk reduction measures, the Russian head of state refuted critics against Russia on such issues as policy predictability, human rights and cyber-security.

“The West believes that the Russian policy is unpredictable. Well, let me reciprocate. The US withdrawal from the ABM (Anti-Ballistic Missile) Treaty in 2002 wasn’t predictable,” Putin told journalists.

As for human rights issues, Putin cited the Black Lives Matter movement in America, the US attacks in Afghanistan, and the existence of the Guantanamo Bay prison.

“One single strike can kill … (about) 120 people. All right, assuming this was a mistake that happens in a war, but shooting from a drone, (at) an unarmed crowd, clearly the civilian crowd, what is this about? How would you call that? And who’s responsible for this?” said Putin.

“And how would you call this person? Who is the killer now?” he asked.

On cyberattacks, Putin said that it is of vital importance in the world in general, “for the US in particular, and for Russia as well in the same volume.”

Putin noted that his country has not yet received any response from the US to Russia’s dozens of requests regarding cyberattacks so far since last year.

While describing the entire meetings as “good and positive”, Biden somehow warned at his separate press conference that he will “take action” if the US continues to be interfered by other countries during its presidential elections.

“I made it clear that we will not tolerate attempts to violate our democratic sovereignty or destabilize our democratic elections, and we would respond,” Biden said. “The bottom line as I told President Putin was that we need to have some basic rules…that we can all abide by.”

The US President added that he gave his Russian counterpart a list of 16 specific entities, ranging from the energy sector to water systems, which were defined by the US as critical infrastructures and should be off-limits to attack by cyber or any other means.

However, Putin attributed the worsening of bilateral relations to the American side. “All steps in regard to the deterioration in the Russian-American relations were not initiated by us, and they were taken by the American side,” he said.

“On the whole, we do realise what our American partners speak about, and they know well what we speak about, when it comes to the so-called ‘red lines’,” Putin said. “But I must sincerely say that we are still far from making emphases and starting to make divisions.”

Although the two sides discussed a wide range of issues from climate change, the Covid-19 pandemic, arms control and cyberattacks, to regional conflicts in Ukraine and Syria, a joint statement from both sides focused on a bilateral strategic stability dialogue for future arms control and risk reduction measures.

The two nuclear powers have “demonstrated that, even in periods of tension, they are able to make progress on our shared goals of ensuring predictability in the strategic sphere, reducing the risk of armed conflicts and the threat of nuclear war,” said the statement.

As “a nuclear war cannot be won and must never be fought,” the two sides “will embark together on an integrated bilateral Strategic Stability Dialogue in the near future,” seeking to “lay the groundwork for future arms control and risk reduction measures,” it said.