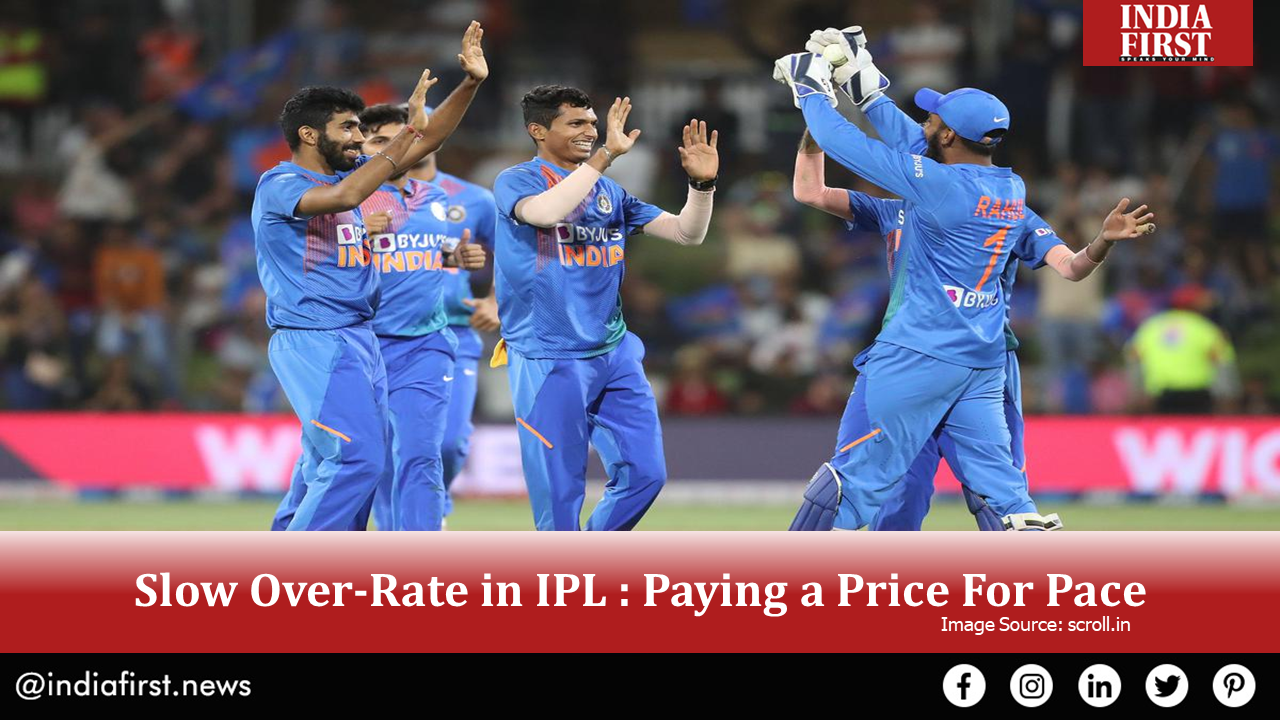 The current edition of IPL has seen many cases of slow over-rate in many matches. On many occasions, teams have been fined for that reason.

According to the code of conduct that IPL abides by, the team that fields has to complete 14.11 overs in an hour to be able to play the 20th over within 1 hour and 30 minutes of the match’s opening. The minimum rate of 14.11 overs per hour needs to be maintained.

The over rate is calculated by the umpires of a match after a match ends and if the over rate falls below the required rate after allowances for any interruption and medical attention are made, then the fielding team is fined for slow over-rate. The first penalty will lead to imposition of a fine of 12 lakhs on the team, the second 24 Lakhs and the third one 30 lakhs. A fourth one will lead to a one-game ban on the team.

In a match between the Rajasthan Royals and the Mumbai Indians, the former’s captain, Steve Smith, was fined Rs 12 Lakhs for a slow over-rate as it was the first instance for the team. Rajasthan Royals lost the match chasing a total of 194 and making only 136 in the chase. The sole star to shine for the Royals was Jos Buttler, who scored an impressive 70 runs in his batting spell. With the ball, Jasprit Bumrah ruled the pitch with a 4-20 in four overs.

From the Mumbai Indians side, Rohit Sharma and Hardik Pandya amassed 30 runs and 35 runs, respectively, but the most crucial contribution came from Surya Kumar Yadav who scored 79 runs off 47 balls.

Before the match between Rajasthan Royals and Mumbai Indians, there have been instances of slow over rates in different matches of IPL 2020. After a match between the Delhi Capitals and the Sunrisers Hyderabad, the former’s captain, Shreyas Iyer, was fined an amount of Rs 12 lakh for the team’s first slow over rate. Sunrisers Hyderabad won the game by 15 runs. The Delhi Capitals were chasing a total of 162 and could only score 147 off 7 wickets.

In a previous instance, Royal Challengers Bangalore were fined an amount of 15 lakhs due to slow over-rate in a match against Kings’ XI Punjab. The penalty was the first one for the Challengers. They faced a defeat of 97 runs against a solid total of 207 amassed by the Kings’ side. Kings XI Punjab captain KL Rahul played an unbeatable knock posting a formidable 132 for his side. RCB was off to a rocky start and faced an early defeat at 109 in the 17th over.

Such instances of slow over-rate in IPL 2020 are not the first in the tournament’s history, as its previous editions have also seen such penalties issued against several teams.