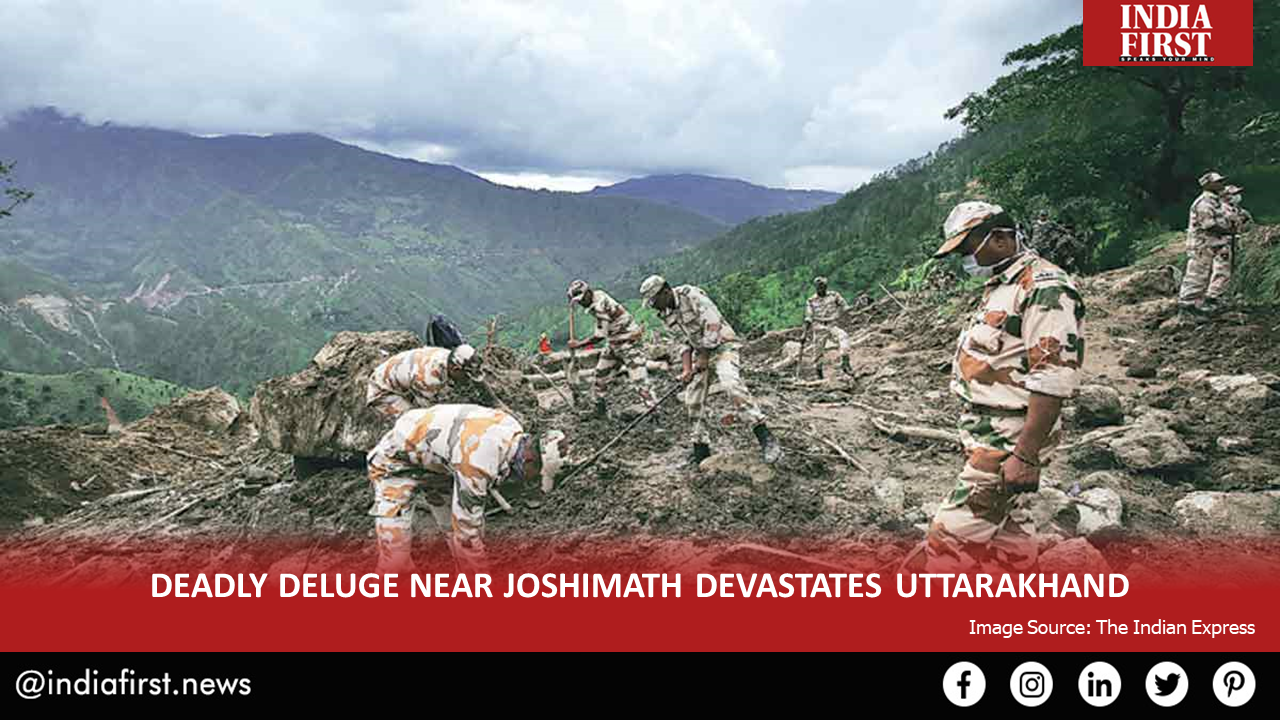 More than 150 lives have been lost with around as many untraceable. Constantly reviewing the disaster, Prime Minister Modi and Union Home Minister Amit Shah have offered prompt Central assistance to the mountainous state.

It has been a shocking Sunday for Uttarakhand that saw a massive flood in its Joshimath area kill at least 150 people and render more than 150 missing.

This happened what with the water level in Dhauliganga river suddenly crossing its regular flow today morning followed by an avalanche near a power project in Chamoli district’s Reni village.

The incident took place near Reni, which is 26 km far from Joshimath. The Dhauliganga river got flooded and destroyed many houses situated at the river banksides.

The Indo-Tibetan Border Police (ITBP) said that there was some cloudburst or breaching of the reservoir at around 10 a.m. which resulted in the flooding in Dhauliganga – one of the six source streams of the Ganges river. The 85 km river meets the Alaknanda River at Vishnuprayag at the base of Joshimath mountain in Uttarakhand.

A dam of the Tapovan power project was breached and feared to have been washed away.

ITBP and State Disaster Response Force (SDRF) personnel have been rushed to the affected areas to evacuate stranded people.

Uttarakhand Chief Minister Trivendra Singh Rawat has convened an emergency meeting to take stock of the situation and to supervise rescue and relief operations.

Though the impact of the disaster may not be felt in Rishikesh and Haridwar, the towns have been put on alert.

A government spokesman said that there was not much human habitation at the site where the glacier broke but a number of power projects have been hit. The government has also appealed to the people not to venture near the Ganga river.

Prime Minister Narendra Modi and Union Home Minister Amit Shah have already spoken Rawat and reviewed the situation in the state. The leaders also suggested all possible help from the Centre.

While in Assam, the Prime Minister reviewed the situation in Uttarakhand during a telephonic conversation with Rawat and other top officials. He took stock of the rescue and relief work under way.

“Authorities are working to provide all possible support to the affected,” Prime Minister’s Office tweeted.

From his personal Twitter handle, the Prime Minister further tweeted that he is constantly monitoring the unfortunate situation in Uttarakhand.

“India stands with Uttarakhand and the nation prays for everyone’s safety there. Have been continuously speaking to senior authorities and getting updates on NDRF deployment, rescue work and relief operations.”

The Home Minister assured Uttarakhand Chief Minister to provide all possible help to the state from the Centre.