WHO DID OR DIDN’T? | India First e Newspaper Skip to navigation Skip to content 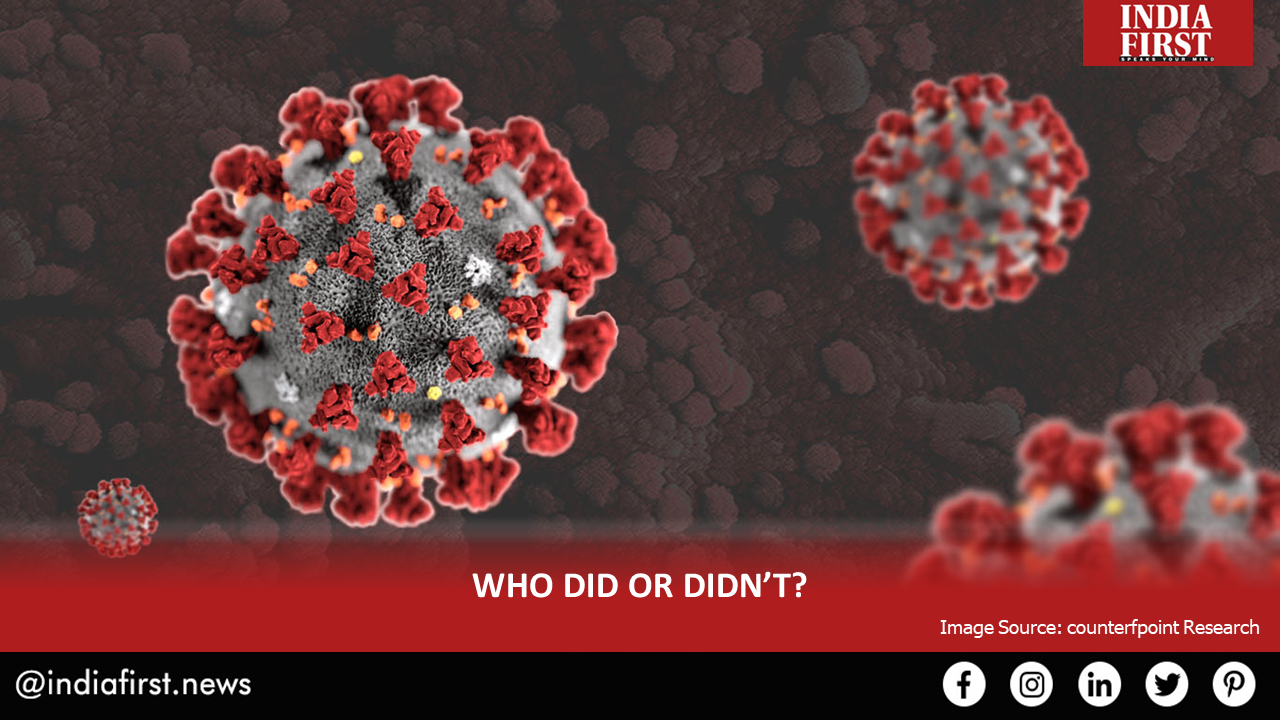 While the international media is making noise about the way China effectively prevented a World Health Organisation expert team from carrying out its coronavirus investigations properly, the global health body is telling a different story altogether.

Beijing’s behaviour with the expert team constituted by the World Health Organization (WHO) to investigate the coronavirus (Covid-19) has led to more speculation about the virus that traces its origins to Wuhan in central China. Various news reports have made it clear that the WHO team worked under limitations and did not have access to all information it sought on the initial days of the outbreak.

The CNN has reported that the team found several signs of a much bigger outbreak in December 2019 than was believed. WHO expert Peter Ben Embarek, the head of the international expert team, told CNN in an interview that the team is trying to access hundreds of thousands of blood samples from Wuhan which China is not allowing them to do.

A significant finding for the team was the existence of over a dozen strains of the novel coronavirus in Wuhan in December. Embarek said the scientists gathered 13 different genetic sequences of SARS-CoV-2 from December 2019, which could provide significant clues about the origin and scale of the outbreak provided they are able to examine this along with wider patient data from 2019.

This large number of virus sequences has led scientists to believe that the virus was in circulation in Wuhan for a much longer time than December. Embarek also told CNN that the different genetic sequences were from different places, including some from the Huanan seafood market.

The 17-member WHO team worked alongside another 17 scientists and experts from China. Of the one month the team spent in China, it had to spend 15 days in quarantine in Wuhan.

What has also become clear from the statements given by various team members after coming out from China, almost a week back, is that their investigating powers were significantly limited by Beijing. The communist country was not only opposed to an independent and international investigation into the genesis of the virus but also tried to pin the blame of the origins of the Covid-19 virus on other countries.

Meanwhile, a Reuters report says that China refused to share raw data on the early Covid-19 cases. Australian infectious diseases expert Dominic Dwyer was quoted by the news agency as saying that the team had sought raw patient data on 174 initial cases of Covid-19 but were only provided with a summary.

Significantly, Dwyer also said that of these 174 cases, only half had exposure to the Huanan market, termed as a hotspot by China for the spread of the coronavirus pandemic.

He added that getting hands on this data was important and the team persistently asked China for this information. The team plans to mention the denial of this data in its final report.

Meanwhile, the WHO has said that the international expert team on the Covid-19 origin-tracing mission in Wuhan was “independent” and had no affiliation to the WHO. “So many times I hear that this is a WHO study or investigation. It’s not,” WHO Director-General Dr Tedros Adhanom Ghebreyesus said at a virtual press conference from Geneva.

Ghebreyesus said that this investigation is an independent study composed of individuals from 100 institutions. Embarek, too, said that their report would be a “consensus document,” adding that “the international teams and the Chinese counterparts have already agreed on the summary reports.”

Nearly one year and two months after the mysterious pneumonia-like infection surfaced in Wuhan, China had been under global scrutiny for its role and negligence in the spread of the virus. China’s relations deteriorated significantly with many countries including the US and Australia over lack of transparency as well as non-disclosure of information over the spread of the virus.

Since then over 2.4 million people have lost their lives due to Covid-19, 109 million have been infected and over 84 million have recovered from the deadly virus.