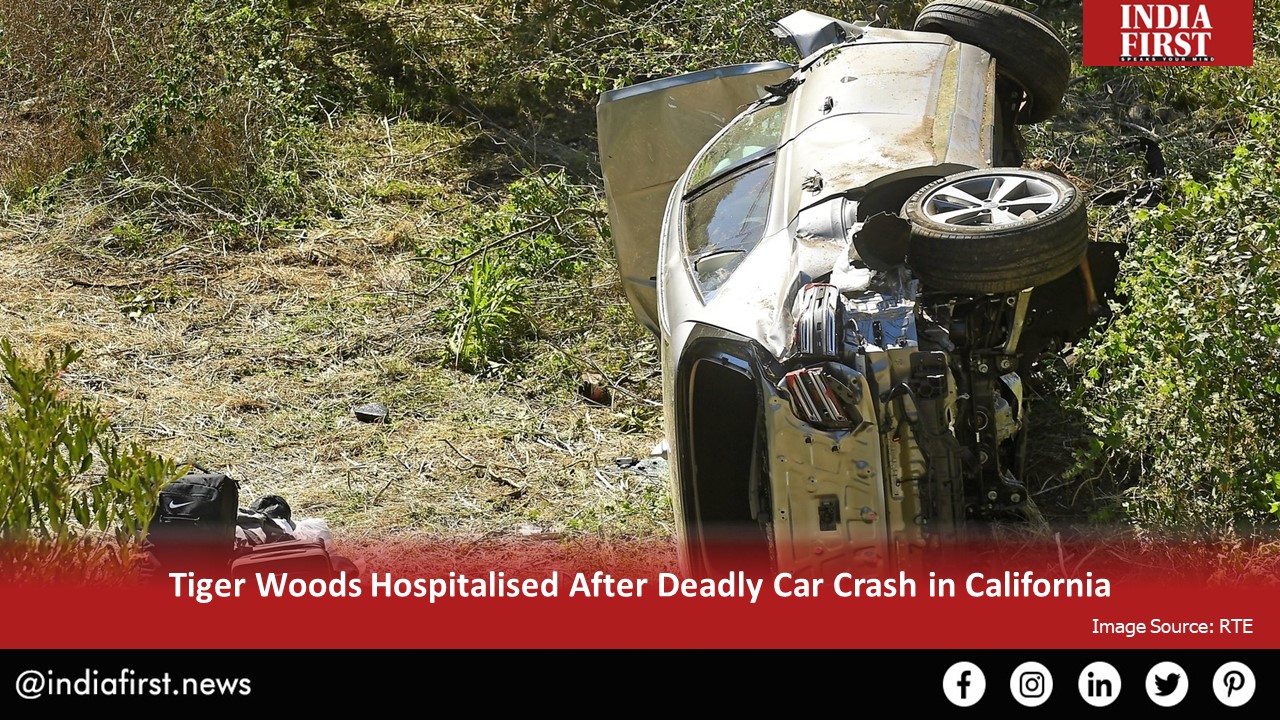 The legendary but beleaguered golfer has suffered serious but not fatal injuries.

“I will say that it’s very fortunate that Mr. Woods was able to come out of this alive,” said LA Sheriff’s Deputy Carlos Gonzalez, who was the first to arrive at the wreck. Seatbelts and airbags which deployed successfully saved Woods from what would otherwise have been a “fatal” crash, he said. It’s still not clear if Woods was speeding – or even texting – in the 45 mph zone.

LA County officials said the 45-year-old was conscious and able to communicate when first responders reached the scene by 7.18 a.m. The inside of the midsize SUV was mostly intact and that “gave him a cushion to survive the crash,” Los Angeles County Sheriff Alex Villanueva said. Both of Woods’ legs are seriously injured.

“Tiger was able to speak to me lucidly,” Gonzalez said. Woods appeared “incredibly calm,” he said, likely because he was in shock.

Woods was on his way for a photo shoot with Discovery-owned GOLFTV, and was alone in his silver-coloured SUV when he crashed a few minutes after 7 a.m. He crossed two oncoming lanes and rolled over several times before coming to a stop. No other cars were involved in the Woods crash.

A resident who heard the crash called the police at 7.12 a.m., and first responders from the Sheriff’s team arrived at the crash site by 7.18 a.m. They called the fire department at 7.22 a.m. who finally got Woods out of the car using an axe to cut through the windshield.

Overhead visuals of the crash showed Woods’ SUV on its side, with its front end flattened, several trees damaged in a wooded area and Woods’ signature gear lying scattered in the underbrush. A huge signboard was lying on the middle of the road, the first signs that Woods may have swerved into oncoming traffic.

This is the third car crash that Woods has been involved in. The first one was in Fall 2009, when his SUV ended up slammed against a tree. It was the beginning of his first big personal and professional crisis when revelations surfaced of his infidelity. In May 2017, he was arrested by Florida police who found him asleep at the wheel of a parked car.

Woods was in Los Angeles over the weekend for the Genesis Invitational tournament at Riviera, where he presented the trophy. The SUV which he was driving seemed to be a car loaned to Woods by the organisers, going by the logo on the exposed side of the car.

Woods exploded onto the world golfing scene when he won The Masters in 1997 at age 21 and then went on a record-breaking PGA winning streak. His Augusta Masters triumph in Spring 2019 was a comeback for the ages. Winner of 15 majors, Woods last played December 2020 in the PNC Championship with his 11-year-old son, Charlie. After five back surgeries and the latest one last December, Woods was not sure when he would return to competitive sport. Asked on a Sunday show on CBS whether he would be at The Masters this April, Woods replied, “God, I hope so.”

As the sun set yesterday, Woods’ fans fearing the worst after seeing the mangled remains of his SUV were just grateful that their hero was still alive.

“I’m sick to my stomach. It hurts to see one of my closest friends get in an accident, and man, I just hope he’s all right. I just worry for his kids. I’m sure they’re struggling,” said Woods’ friend and fellow golfer Justin Thomas.