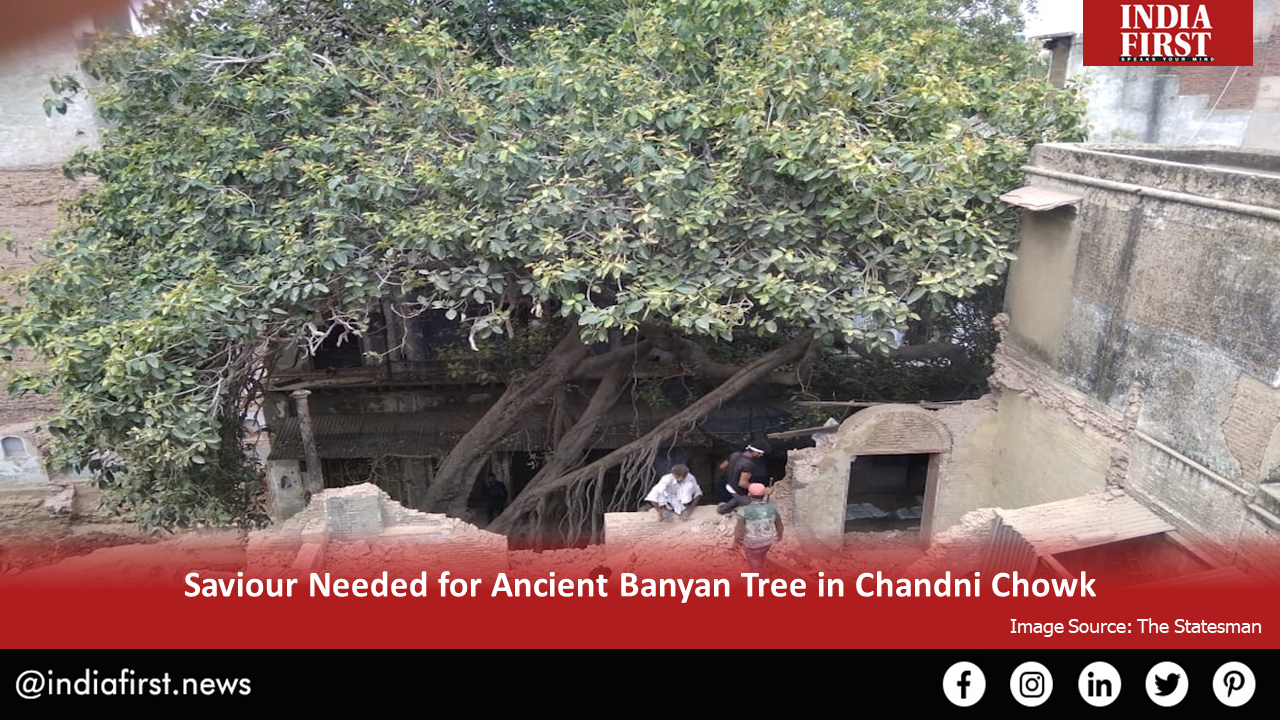 A banyan tree in New Delhi’s Chandni Chowk area that could be 300 years old might have braved the ravages of time since the 17th century, but today it is facing a threat to its very survival owing to unfettered urbanisation.

Last month, the forest department of the Delhi government issued a notice under section 13 of the Delhi Prevention of Trees Act (DPTA), 1994 which allows adoption of trees.

Ravindar Kumar, a forest officer in the Delhi Government, said: “Two people have applied for adopting the banyan tree. However, none of them have visited the site so far. We are waiting for more people to come forward to adopt it.”

The branches of the towering tree are now being impeded by concrete walls of an under-construction building, which is part of a project being developed by a real estate firm. Realising the threat to the tree that is part of the built heritage of Chandni Chowk, two local residents have even filed a petition in a court.

A bench of Delhi High Court hearing a petition filed by businessman Nitin Gupta in August last year, rapped both the forest department and the North Delhi Municipal Corporation and said: “How can you do this to a 300-year-old tree? It has existed even before the British thought of coming to India. It is a part of the city’s heritage. How can you damage it in this manner?”

Nitin Gupta, who runs a garments shop behind the under-construction structure, said he filed the petition not just to prevent damage to the tree but also to his business establishment. Pointing towards the cracks in his shop, Gupta said, “In the Walled City, many buildings are more than 150 years old. Due to digging of the basement area, around 10-15 shops have been damaged.”

“The builder has banned entry at the site and has deployed security guards so that nobody can take photographs of the heritage tree. We read in the news that caretakers would be appointed to look after it but nothing has happened so far,” Gupta further said.

Kushmakar Rastogi, the other petitioner, who runs a garments shop near the heritage tree, said he is awaiting the appointment of a caretaker for the tree by the forest department.

Recounting the history of the tree, locals say it has been housed at Badwali Kothi owned by Satyanarayan Gudwale. The house was later transferred to Jogdhayan Rastogi. “Rastogi in turn set up the Hari Bhawan Rastogi Memorial trust in 1964 and after his death the land was divided into three parts and sold to a builder,” says Kushmakar Rastogi.

While the Delhi High Court in its observation on August 13 last year has estimated the tree to be over 300 years old, the forest department claimed it was at least 150 years old.

Standing tall at Badwali Kothi, one of the oldest buildings in the neighbourhood, one of the many buildings identified in the area by the heritage trees they house such as Peepalwali Kothi, the Banyan Tree now awaits a few good patrons who can turn saviours and help nurture its ‘heritage’ status.