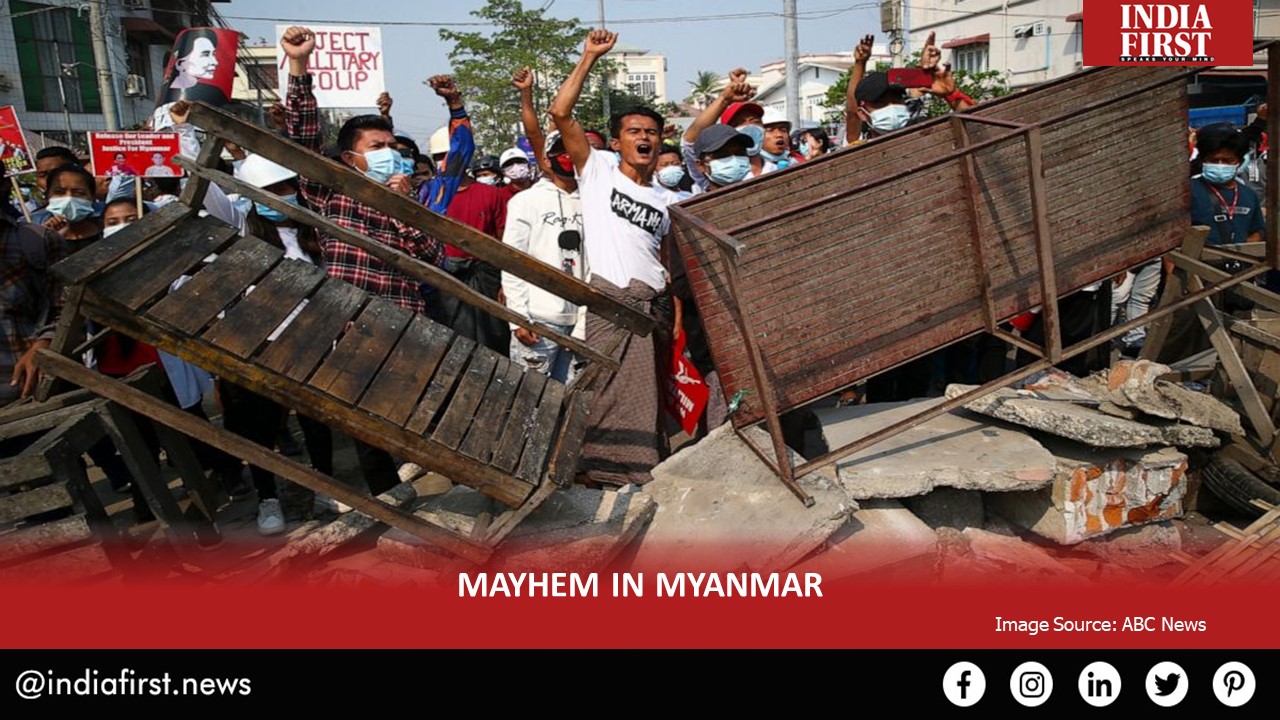 At least three pro-democracy protesters were shot dead by Myanmarese security forces in the southern coastal town of Dawei today, according to medical volunteers and Burmese media reports.

Unofficial sources put the death toll in the firing at 10 because many of those injured had sustained live bullet wounds.

Last week, the military junta unleashed armed thugs on the peaceful protesters in Yangon who have been hitting the streets in large numbers since the forcible takeover by the army on February 1, the day the newly elected parliament was to convene.

The military junta is unable to contain the massive street protests to back the popular demand for restoration of parliament and release of ousted leader Aung San Suu Kyi and leaders of her NLD party which won a massive landslide in the November elections.

Two senior editors in Yangon revealed that the junta is ‘getting desperate’.

“Despite extensive use of rubber bullets, tear gas and water cannons, the soldiers and police loyal to the junta have failed to break the demonstrations. Even use of armed thugs did not deter the protesters. So now the desperation is showing in the use of live ammunition on crowds,” said a veteran editor, on condition of anonymity for fear of arrest.

Huge crowds were again seen today in Yangon and many other cities like Dawei where the security forces opened indiscriminate fire.

Hein said some of those injured had live bullet wounds while many had wounds from rubber bullets.

“There could be many more casualties as well because more wounded people keep coming in,” Hein said.

There have been unconfirmed reports of other deaths elsewhere in the country, including in the commercial hub of Yangon, Mizzima said .

Officers in downtown Yangon used force to break up a large crowd that was gathering to protest but there were conflicting reports as to whether the security forces had used live ammunition to fire on the crowds.

Amy said there were no warning shots but firing straight into the crowd that left many injured. The teachers from her school went into hiding fearing arrest, she said.

At least one journalist covering the Sunday protest was beaten and detained in Myitkyina, the capital of the northern Kachin state, according to local outlet ‘The 74 Media’. Another reporter was hit by rubber bullets while covering a protest in the central city of Pyay.

More than 850 people have been arrested, charged or sentenced since the coup, according to the Assistance Association for Political Prisoners monitoring group. This includes many journalists, including an Associated Press photographer who was arrested last Saturday.

The weekend crackdown is expected to raise that number dramatically, with state newspapers reporting 479 arrests on February 27 alone.

International condemnation of the coup has been fierce, with the US, the EU and other major powers denouncing the violence against the protesters.

Aung San Suu Kyi has not been seen in public since she was taken into custody during pre-dawn raids in the capital Naypyidaw on February 1 at the start of the military takeover.

She is due to face the court this Monday under obscure charges of possession of unregistered walkie-talkies and violating coronavirus restrictions on public gatherings.

But her lawyer Khin Maung Zaw has told journalists that he has not been able to meet Suu Kyi ahead of the hearing so far.